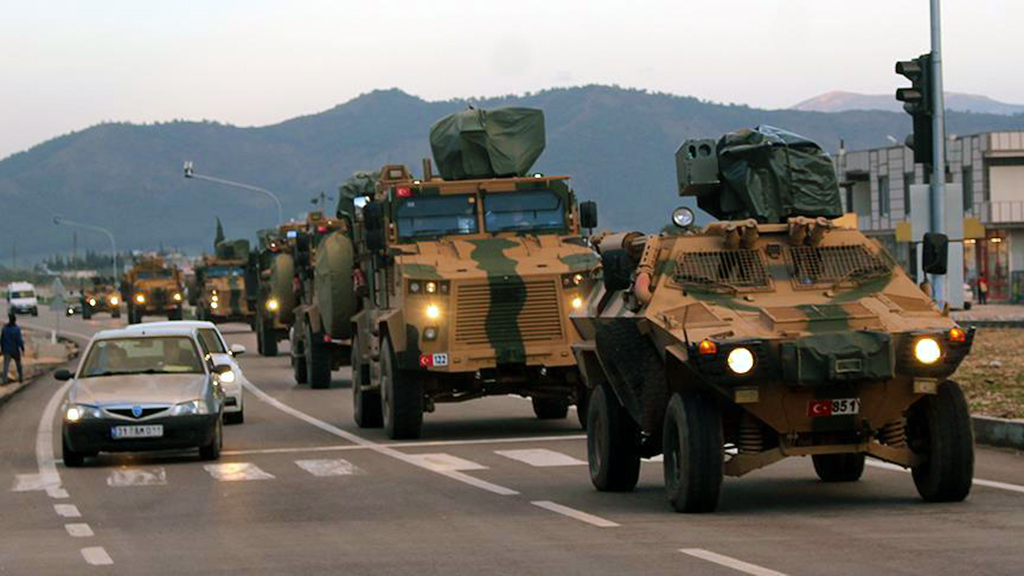 While Daesh cells still do carry out attacks in Manbij and other YPG/PKK-held areas, the neighboring opposition-held Al-Bab or Jarablus remain safe from Daesh attacks, both of them being among the areas Turkey cleaned from Daesh

On Jan. 13, 2019, U.S. President Donald Trump suggested the creation of a 32-km (20 miles) safe zone, which President Recep Tayyip Erdogan welcomed, reasserting that Turkey would be establishing a safe zone. As discussions continue on the manner of its implementation amid the U.S. declaration of withdrawal from Syria, some talk of the creation of a buffer zone by a third actor between two states or parties, Turkey resolutely states that it will only accept a safe zone under its control in which civilians will be protected. From the Turkish perspective, the 32-km safe zone in question along the Turkish border is aimed at addressing vital Turkish concerns regarding a U.S.-created security threat, namely the YPG, an affiliate of the terrorist PKK. A safe zone to be created must consider Turkey’s national security and be under Turkey’s control. Turkey indeed demanded the establishment of a safe zone in the earliest days of the Syrian war. The recent developments will be in Turkey’s interest as long as Turkey’s five main objectives for the safe zone are achieved.

First of all, the main goal of Turkey is to secure its borders from any terrorist threat. In Aug. 2016, Turkey launched Operation Euphrates Shield to clean its border from Daesh terrorists and neutralized some 3,000 Daesh militants. And through the successful implementation of Operation Olive Branch at the beginning of 2018, it cleaned its border all along the Hatay province from YPG terrorists. As the entire U.S. withdrawal decision and the discussions around it, including the safe zone, came only after Turkey’s decision to launch another military operation to clean the east of the Euphrates from terrorists, the much-discussed safe zone has to fulfill this objective in order to be acceptable to Turkey, which clearly indicates a military operation against the YPG/PKK. Therefore, the YPG/PKK terror threat towards Turkey has to be eliminated either by force or through a negotiated settlement with the U.S., in which the YPG/PKK would have to withdraw to the south of the planned safe zone. However, it seems very unlikely that the terrorist YPG/PKK will agree to withdrawing to the south of the safe zone, as we see in the example of the YPG elements who have still not withdrawn from Manbij.

Secondly, another major demand from Turkey regarding the safe zone is that the area has to be controlled by Turkey. As the Manbij process has shown, statements and promises from U.S. officials regarding a YPG withdrawal cannot be trusted. Turkey has to control the safe zone to be able to monitor and eliminate any terrorist threat. In this regard, Turkey will definitely not leave its own national security at the mercy of others. The fact that U.S. officials have not kept their promises about the YPG/PKK will overshadow the safe zone discussions. A rapid implementation of the Manbij process would be a positive step toward building mutual trust.

Thirdly, Turkey wants to form a broader local partnership in the safe zone at the level of local administration, in which local people would be represented in local councils. By doing so, Turkey wants to help Syrians to help themselves. In this regard, Turkey has shown her readiness to accelerate reconstruction aid, provide healthcare and education access to the local people, supply the region with humanitarian aid and help establish security by training police forces. Turkey plans to annul the school curriculum imposed by the YPG/PKK and enable the Syrian society to implement its own curricula. Turkey thus wants to help Syrians restore their normal life by preserving the territorial integrity of Syria and accelerating the political transition process after eliminating the imposed terror laws of Abdullah Ocalan, the PKK’s founder.

Fourthly, Turkey seeks to establish stability in Syria and in the east of the Euphrates. Turkey has long argued that the root causes of Daesh in Syria have to be addressed in order to achieve an enduring victory against Daesh. Areas under the control of the Turkish-backed Syrian opposition has faced almost no attacks by Daesh, as is currently the case in northern Aleppo, whereas there are constant Daesh attacks in the YPG/PKK-held territory. While Daesh cells still do carry out attacks in Manbij, in which two US soldiers have been recently killed, the neighboring opposition-held Al-Bab or Jarablus remain safe from Daesh attacks, both of them being among the areas Turkey cleaned from Daesh. The two recent Daesh attacks in Manbij and Hasakah which targeted US soldiers are a clear sign of the YPG/PKK’s inability to eliminate Daesh and its root causes in the areas under their control.

Lastly, Turkey wants to ensure that Syrian refugees are able to return to Syria and aims to restore the original demographic structure of the areas in the safe zone. Despite all the U.S. support in the areas controlled by the YPG/PKK, refugees in Turkey as well as in northern Iraq have not been able to return to the east of the Euphrates. While around 15 percent of the 3.5 million Syrian refugees in Turkey were originally living in what are today YPG/PKK-held areas, all of the 250 thousand Syrian refugees in northern Iraq fled from YPG/PKK-held areas. In contrast, almost 300 thousand Syrian refugees have returned to the area liberated by Operation Euphrates Shield. The current YPG control in the east of the Euphrates is not only preventing refugees from going back to their homeland, but also creating many new pockets of IDPs (internally displaced people) inside Syria. Over 350 thousand IDPs from YPG/PKK-held areas are now living in northern Aleppo. In addition to her goal of enabling the voluntary resettlement of refugees and IDPs to the east of the Euphrates, Turkey wants to have the original demography back to prevent the PKK-affiliated organizations from building a de facto entity. Speaking only of the discussed 32-km safe zone, the majority of the population consists of Arabs. Except for the enclave in Ayn al Arab and the villages to the west and east of Qamishli, which are dominantly Kurdish, the area has a significant Arab majority. Other minorities are the Turkmens who live in a number of areas from Tal Abyad to Raqqa and the Assyrians living in the strip between Hasakah and Tal Baydah.

All in all, Turkey might well be the nation that has suffered most from all the collateral damages resulting from the chaos in Syria. Over the last eight years, Turkey has had to deal with massive refugee flows and cross-border terrorism of Daesh and the YPG/PKK along with many other complex issues caused by the war in Syria. Turkey has long warned its international allies about the danger of arming and supplying the YPG/PKK, but its warnings have so far fallen on deaf ears. To reiterate, the establishment of a safe zone has been a Turkish demand since the earliest days of the crisis. Now as its implementation is being discussed, Turkey is ready to take responsibility and will do so. Turkey’s objectives in the establishment of the discussed safe zone have to be accommodated, or Turkey will be obliged to take unilateral actions in order to secure its borders from terrorism and enable Syrian refugees to return to their homeland.

New actors and a new order in the Middle East
Previous

What is happening in Venezuela?
Next
Loading...
Loading...
We use cookies to ensure that we give you the best experience on our website. If you continue to use this site we will assume that you are happy with it.Ok