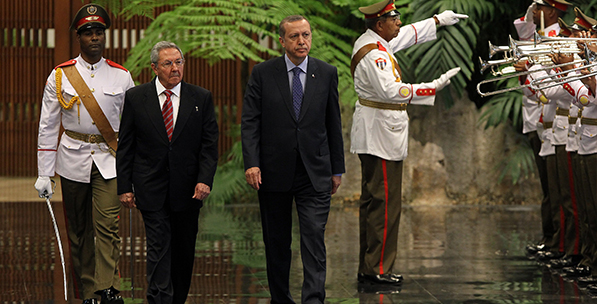 As an emerging power from the Middle East and North Africa, Turkey must be more visible in Latin America and we very likely will be.

We live in a world of shifting global power balances, competition among both established and emerging powers and multi-track diplomacy that brings together political, economic and cultural elements. In this context, despite the interruption caused by the post-Arab Spring reversals in the Middle East as well as domestic moves to undermine the legitimacy of President Recep Tayyip Erdoğan and the Justice and Development Party (AK Party) government, Turkish foreign policy is again on track to follow the pattern of an emerging power. This week, Erdoğan left behind all the fuss about the resignation of the National Intelligence Organization (MİT) chief Hakan Fidan to stand as a candidate for Parliament, the central bank’s rather indecisive interest rate decisions and the usual domestic political wrangling about the transition to a presidential system to head to a vital Latin American tour of Colombia, Cuba and Mexico.

As far as Turkey’s recent foreign policy openings are concerned, Latin America constitutes a vital and strategic region along with East Asia and Sub-Saharan Africa where extensive economic opportunities exist to extend the current profile of international trade and investment. In the first decade of the 21st century, Latin America and the Caribbean experienced steady economic growth by learning from the experiences of a series of macroeconomic crises in the 1980s and the 1990s. Progress in international trade was also impressive as at least some of the countries in the region became more thoroughly incorporated into global supply routes and diversified their commercial relations. Currently, Latin America and the Caribbean represent the third largest energy supplier and the largest producer of foodstuffs in the world.

On the other hand, the presence of Argentina, Brazil and Mexico within the G20 as representatives of Latin America provided experience-sharing and coordination opportunities with Turkey in this global governance platform. Therefore, despite the geographical distance between Turkey and the subcontinent and the different ideological roots of the political leaders, there emerged a common sense of standing shoulder to shoulder in global governance platforms demanding justice and equal representation. Turkey’s membership as a non-permanent member of the U.N. Security Council was largely supported by Latin American countries, as the nuclear swap deal for Iran that was arranged by Turkey and Brazil formed a common bond between these partners. After 2009, mutual diplomatic contacts intensified with Brazil, Chile and Argentina but there is growing interest on the Turkish side to develop relations further with Mexico and Central American countries as well. Meanwhile, Turkey became an observer in the Organization of American States (OAS), the Association of Caribbean States (ACE), the MERCOSUR, the Rio Group and the Caribbean Community (CARICOM).

Turkey’s growing interest in Latin America might be compared to that of some of the emerging powers in Asia such as China, South Korea and Indonesia, which all seek to form intensive trade and investment channels in the region. Turkey’s market diversification approach was hitherto shaped by the Commercial Development Strategy towards the Americas, which identified Argentina, Brazil, Chile, Cuba, Mexico and Venezuela as key trading partners and produced impressive results. But still, the share of commerce with Latin America constitutes only around 2 percent of Turkey’s total commerce and there is a huge potential for expansion.

Now the leadership in Turkey is adamant about going beyond regional pivots and directly reaching out to smaller actors so that diplomatic and commercial contacts can be expanded to a whole new level. Erdoğan, as an unconventional politician who does not hesitate to voice strong criticism of the hegemonic powers of the global system through mottos such as “the world is larger than five,” has received a warm regional reception. Therefore, he felt at home when he proudly posed in front of the statute of Che Guevera in

Strategic Patience and the Insanity of 'Lone Wolves'
Next
Loading...
Loading...
We use cookies to ensure that we give you the best experience on our website. If you continue to use this site we will assume that you are happy with it.Ok