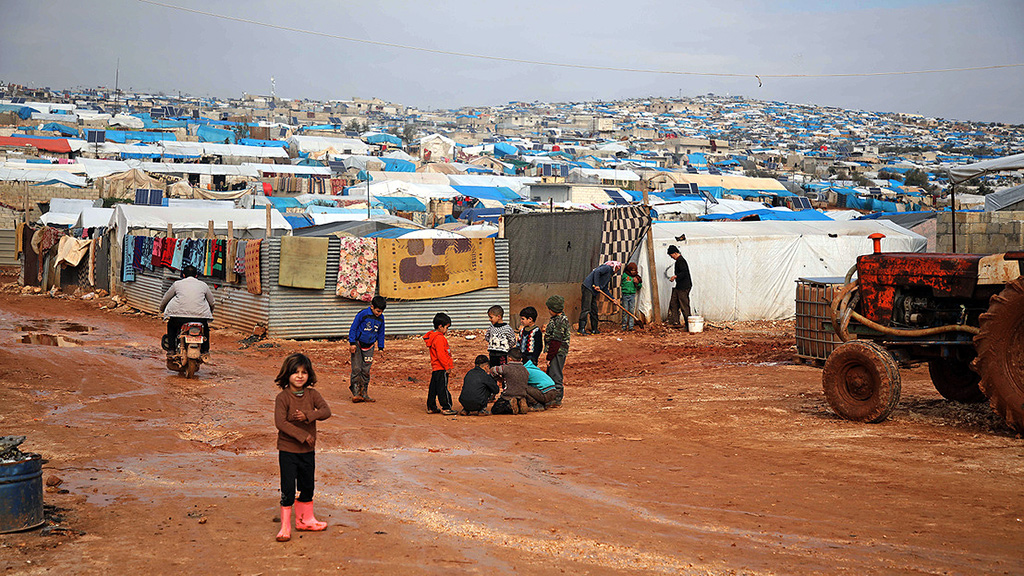 Children gather outside their makeshift shelters following torrential rain that affected a camp for displaced people near the town of Atme, close to the Turkish border, in Syria’s mostly opposition-held northern Idlib province, Jan. 10.

Turkey-US cooperation key for the stabilization of Syria

Strong Turkish-U.S. cooperation in Syria may bring more stabilization and security to the region, which could have direct positive impacts for the future of Syria

A month ago, Turkey was planning to launch a major operation to clear its border of terror groups. Turkey did it twice in the last two years in Operation Euphrates Shield and Operation Olive Branch. The U.S. administration’s statements of “concerns” did not resonate well in Turkey, especially after the announcement of border protection forces by the Pentagon. The lack of trust between Turkey and the U.S. in regards to the U.S. failure to fulfill its promises in Manbij deteriorated after these statements.

While the Turkish government was expressing its intention to launch another operation in Manbij against terrorist forces, the U.S. administration decided to agree on a road map in Manbij that would respond to Turkey’s national security concerns.

However, the implementation of the plan was delayed. When the road map started to be implemented, another statement from the U.S. military came in regards to building observation posts along the border. This demonstrated not only the continuation of relations between the People’s Protection Units (YPG) and the U.S. after the end of the operations against Daesh but also it would generate a condition that the YPG could control areas immediately south of the Turkish border.

However, since that first announcement of the decision, mixed messages started to come from Washington concerning the Syria withdrawal. The lack of clarity is not something that Turkey can tolerate when its national security is at stake. The recent reports about the beginning of the withdrawal of U.S. forces was perceived not as a real withdrawal but an attempt to win time by those who are against full withdrawal from Syria in the U.S.

In this vague situation, both the YPG and Daesh may aim to take advantage of this condition and entrench themselves in these regions. We have seen in recent years that terror groups that operate in Syria developed the capacity of flexibility in regards to changing tactics. They can sometimes act like a regular army but when they lose their territory they can return to their default settings and become a conventional terror group.

In the case of Syria, on its borders, Turkey faces the danger of an evolved Daesh after the loss of most of their territories that can organize terrorist attacks in Syria, Turkey and beyond and a YPG that is empowered, trained and equipped in the last four years by the U.S. that can launch attacks by using these updated skills. The flexibility of these groups when it comes to tactics can generate serious security problems for Turkey and can destabilize the region as a whole.

Especially, the YPG can also start searching for another state to sponsor it in eastern Syria as an armed group. Another sponsor of the YPG can generate major state-to-state conflict as Turkey demonstrates all of its determination to clear these terror groups in the region. Since the announcement of the withdrawal decision Turkey also saw that there was not any exit strategy to end the U.S.’s relations with the YPG.

In this situation, Turkey will definitely take steps to take this matter into its own hands. The power vacuum and the ambiguity of the situation should not be utilized by other countries to exploit the situation for their own geopolitical expense. Turkey is now trying to end this ambiguity on its own terms. In the last few days the visits of the Turkish defense minister to the border region and the statements of President Erdoğan show that instead of waiting for clarity, Turkey will launch its military operation.

At this critical juncture, the U.S. should provide more clarity on how to withdraw forces from Syria and how to coordinate these moves with Turkey. Recent attempts to persuade the U.S. administration to work with Turkey east of the Euphrates forgets that Turkey and the U.S. have been working together in the war against terror for more than 15 years now.

Even when Turkey was disappointed and frustrated with the U.S. insensitivity for Turkey’s national security concerns, Ankara never backtracked from these principles of working together against terror. It was Turkey that Daesh targeted in the midst of counter-Daesh operations in Syria to discourage Turkey to help the international coalition. Instead, Turkey launched massive offensives in Daesh-held territories. Turkey also was the first country to use its ground forces against Daesh in Syria.

Thus, Turkey has the most seasoned counterterrorism forces in its military and can handle security crises in the region with the help of local elements and with the coordination of the U.S. President Erdoğan, in his op-ed for The New York Times, reiterated establishing a stabilization force in Syria to fight against different terrorist groups. It is important for the U.S. to launch a process of coordination for the withdrawal process. As stated by both leaders, coordination is key for the success of these operations and the stabilization and later reconstruction of Syria.

Turkey's Syria plan is the only viable plan
Previous

Dual containment isn't a workable plan in Syria
Next
Loading...
Loading...
We use cookies to ensure that we give you the best experience on our website. If you continue to use this site we will assume that you are happy with it.Ok