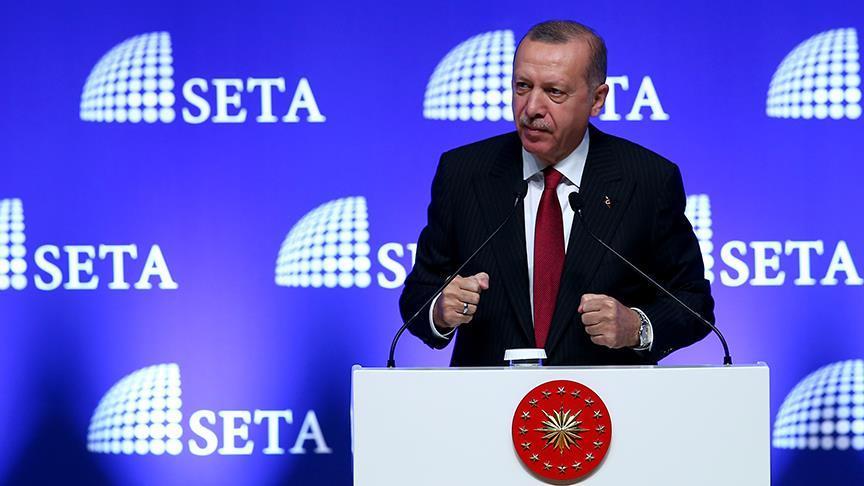 Economy is being used as a weapon against Turkey, says Recep Tayyip Erdogan

The announcement came in his address to a symposium organized by the Foundation for Political, Economic and Social Research (SETA) on the 17th foundation anniversary of the ruling Justice and Development (AK) Party.

“We will boycott American electronic products,” Erdogan said, adding that Turkey would produce a better version of every product previously bought with foreign currencies and export them.

“They do not hesitate to use the economy as a weapon against us, as they [also] tried in the diplomatic or military field, and efforts to sow social and political instability,” he added.

U.S. President Donald Trump on Friday ramped up his attack on Turkey by doubling U.S. tariffs on Turkish aluminum and steel imports to 20 percent and 50 percent, respectively.

Lambasting the “economic attack” on Turkey, Erdogan said: “Our country today has one of the most solid banking systems in the world in all respects.”

The president said the reasons for the economic attack have nothing to do with the Turkish economy, but that behind the attack lie “some other plans.”

To fight off this attack, Erdogan stressed economic and political steps.

“We took and will take the necessary measures in the economy … The second, and the most significant point to me, is to keep our political stance strong,” Erdogan added.

On recent economic developments in Turkey, Erdogan said: “Whether one is local or a foreigner, friend or foe, anyone could see that there is something strange in our economic data.”

The president also urged businesses to do more exports.

“I call on our people and especially our business world that the best answer you could give to economic hitmen is to fully embrace your business.

“We must produce more, export more, as there is no meaning in locking [our products] up in storage.”

Turkish foreign policy 'domestic as well as global'
Next
Loading...
Loading...
We use cookies to ensure that we give you the best experience on our website. If you continue to use this site we will assume that you are happy with it.Ok