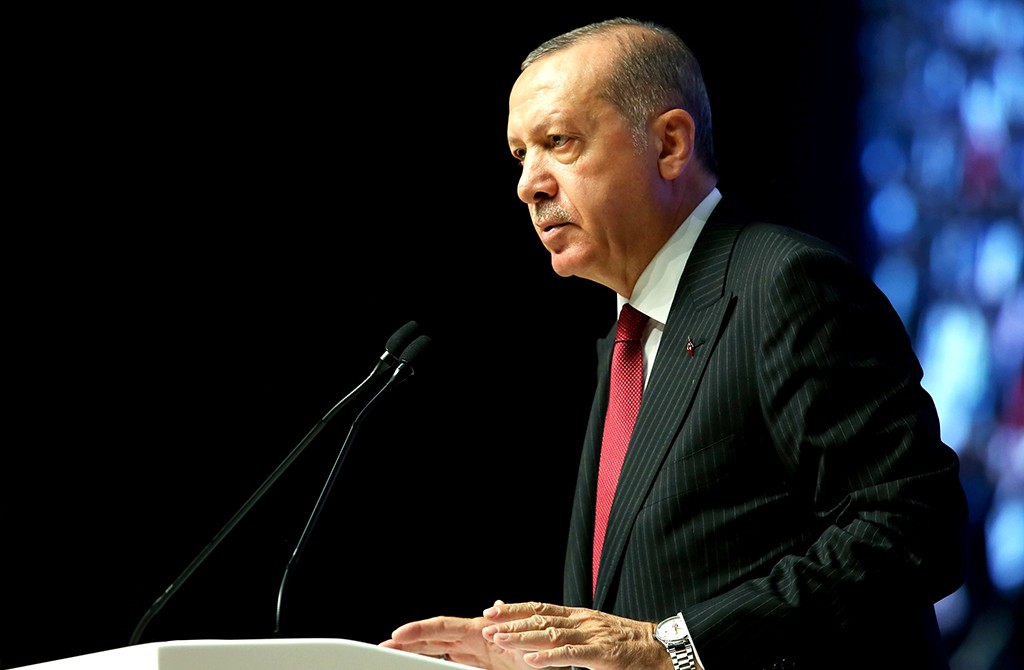 President Recep Tayyip Erdoğan said Tuesday that Turkey will impose a boycott against U.S. electronic products amid an ongoing and deepening rift between the two NATO allies over a number of issues.

President Recep Tayyip Erdoğan said Tuesday that Turkey will impose a boycott against U.S. electronic products amid an ongoing and deepening rift between the two NATO allies over a number of issues.

Speaking at a symposium organized by the Foundation for Political, Economic and Social Research (SETA) in the capital Ankara on the 17th foundation anniversary of the ruling Justice and Development Party (AK Party), Erdoğan said: “For each product we buy from abroad with foreign currencies, we will manufacture better ones and sell them abroad. We will implement a boycott on U.S. electronic products.”

“If they have iPhone’s, there is Samsung on the other side. We have Venus in our own country, Vestel. We will implement these,” he said.

Following Erdoğan’s speech, the shares of Turkish electronics producer Vestel trading in Borsa Istanbul (BIST) increased by as much as 7 percent amid an overall surge in benchmark BIST-100 Index by 1.1 percent.

“They shall understand what we do; what we will do. So, we will be self-sufficient. We will produce what is not here. This nation is able to do these things,” he added.

Erdoğan reiterated the Turkish government’s view that the recent downturn in Turkish lira and stocks was caused by an attack by U.S. President Donald Trump and his administration.

“When they fail to make us what they want on the field, they don’t hesitate to use the economy as a weapon, just like diplomacy, just like military power, just like social and political instability,” Erdoğan said.

Lambasting the “economic attack” on Turkey, Erdoğan said: “Our country today has one of the most solid banking systems in the world in all respects.”

The president said the reasons for the economic attack have nothing to do with the Turkish economy, but that behind the attack lay “some other plans.”

To fight off this attack, Erdoğan stressed economic and political steps.

“We took and will take the necessary measures in the economy … The second, and the most significant point to me, is to keep our political stance strong,” Erdoğan added. “There is a clear economic attack against Turkey. In the past, these things used to be carried out in a more sophisticated, subtle way.”

On recent economic developments in Turkey, Erdoğan said: “Whether one is local or a foreigner, friend or foe, anyone could see that there is something strange in our economic data.”

“We must produce more, export more, as there is no meaning in locking [our products] up in storage.”

“The U.S. has targeted not only our country but also China, Russia, Iran and Europe. It has already targeted Canada. However, this situation alone is not enough to understand what’s happening in our country; so, it’s a bigger and deeper operation against my country,” the president asserted.

Turkey and the United States have been locked in a heated crisis emanating from unjust sanctions and the actions of U.S. President Donald Trump, as Washington levied sanctions on Interior Minister Süleyman Soylu and Justice Minister Abdulhamit Gül for not releasing American pastor Andrew Brunson, who faces terrorism charges in Turkey.

Serving at the Diriliş (Resurrection) Protestant Church in the western province of Izmir, Brunson was arrested in October 2016 and moved to house arrest on July 25 due to health problems. He is scheduled to appear before a court in October for his third hearing after the court rejected an appeal for his release in a July 18 hearing.

Brunson, a Christian pastor from North Carolina who has lived in Turkey for more than two decades, was indicted on charges of helping the Gülenist Terror Group (FETÖ), which is responsible for the failed 2016 coup, as well as for supporting the PKK.

Trump ramped up his attack on Turkey on Friday by doubling U.S. tariffs on Turkish aluminum and steel imports to 20 percent and 50 percent, respectively.

Turkish officials led by Erdoğan said that the increase in tariffs doesn’t comply with World Trade Organization (WTO) rules, let alone the strategic partnership and alliance between the two countries. Turkey retaliated in kind to the sanctions on its ministers, although noting that these sanctions are meaningless.

The two countries are also at odds over their policy in Syria as the U.S. backs the Syrian Democratic Forces (SDF), which is dominated by the People’s Protection Forces (YPG), the armed wing of PKK terrorist group’s Syrian offshoot the Democratic Union Party (PYD). Turkey considers the control of regions in northern Syria by the SDF and the YPG a direct threat against its national security due to the ongoing conflict with the PKK since early 1980 that killed more than 40,000 people and cost billions to the country’s economy.

Fethullah Gülen, the leader of FETÖ group that launched the July 15, 2016 coup attempt killing 251 people and injured 2,200 others, also resides in U.S. state of Pennsylvania. Turkey repeatedly demanded Gülen’s extradition but the issue has not progressed so far.

Economic wars and the emergence of a new chaotic world order
Next
Loading...
Loading...
We use cookies to ensure that we give you the best experience on our website. If you continue to use this site we will assume that you are happy with it.Ok