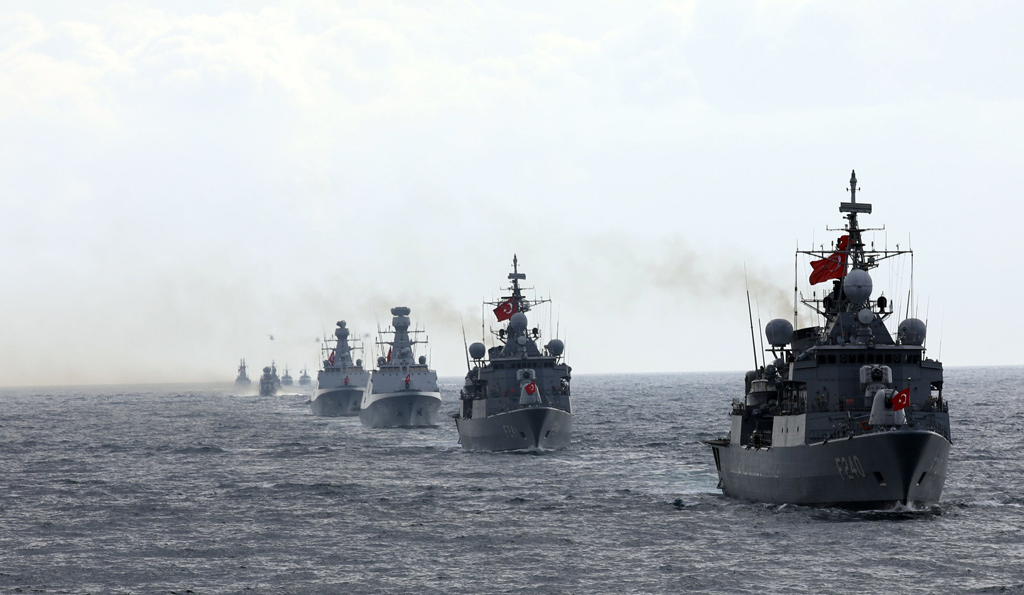 Turkey is an indispensable pillar of Europe’s security

Some influential figures in Washington and Brussels are continuing to advise authorities on both sides of the Atlantic to sideline, or even contain Turkey in the defense architecture of the Middle East and North Africa (MENA), the Black Sea region and southeastern Europe.

Some influential figures in Washington and Brussels are continuing to advise authorities on both sides of the Atlantic to sideline, or even contain Turkey in the defense architecture of the Middle East and North Africa (MENA), the Black Sea region and southeastern Europe.

They are advising decision-makers on both sides of the Atlantic to put more diplomatic, political, and economic pressure on Turkey. Despite their failed attempts to constrain the country over the last several years, they insist on their fallacious game plan and strategy with different tactics.

There are hostile voices coming from both Europe and America, calling to coordinate efforts to put more pressure on Turkey in the coming months. Members of the anti-Turkey alliance consider the Joe Biden administration a renewed opportunity for their goals.

There is a systematic and coordinated smear campaign against Turkey in various political spheres, media and think tank circles. Those circles are disappointed by the reluctance of European leaders and NATO to criticize Turkey vociferously in high-level meetings.

Nowadays, there is a decline in critical coverage of Turkey in American outlets. This could likely be due to the reduced enthusiasm from the coalition of anti-Turkey Gulf monarchies to fund such coverage.

There is also saturation in the anti-Turkey and anti-Recep Tayyip Erdoğan coverage in the U.S. The narratives of the “new sultan,” “neo-Ottomanism,” “Turkish expansionism,” “authoritarianism” or “allies no more” are no longer selling in mainstream circles.

The anti-Turkey coverage, however, is more visible in Greek, German and French outlets.

The credibility of the anti-Turkey and anti-Erdoğan coverage in Europe will decline gradually because that coverage is extraordinarily biased and does not serve the long-term plan and strategic interests of European actors.

Rather than playing into these alliances’ hands and escalating the tensions with various actors in Europe, Turkish authorities are being more careful to reduce tensions.

Turkey is pursuing a strategy to reduce anxieties with its European counterparts and the other stakeholders in the MENA region. This patient and prudent strategy has already returned some achievements.

The recent normalization with Egypt is an example of such a success. Erdoğan has signaled that there is more to come in the coming days. Turkish authorities will not be dragged into the escalating strategy of anti-Turkey actors. This does not mean that Turkey will keep silent while its interests are targeted

Turkey is under a tacit or implicit arms embargo, and under Washington’s political pressure since the failed July 15 coup attempt by the Gülenist Terror Group (FETÖ).

Still, Washington continues to think that it lost its clout over the Turkish military and Turkey’s stronger civilian leadership under Erdoğan.

Those actors try their best to weaken or slow down Turkey’s struggle to develop an autonomous defense capacity. Indeed, this strategy weakens Europe’s security and defense capacity as well.

The Biden administration may reconsider returning to the Joint Comprehensive Plan of Action (JCPOA) or the Iranian nuclear deal.

Still, after expanding in Iraq, Syria and Yemen, Iran will be unwilling to backtrack its strategic gains. Washington also seems reluctant to expand its military presence in the MENA region. It will be challenging for Washington to gain more from the JCPOA without putting more pressure on Iran.

It will be impossible to put more pressure on Iran by withdrawing its troops from Iraq, Afghanistan and the Persian Gulf. This paradoxical situation may force Washington to change its dysfunctional regional strategy.

Containing Iran by using the Kurds, Saudi Arabia and some Gulf monarchies is a dysfunctional Washington policy. This strategy, coordinated during the Donald Trump administration, has already crumbled.

In the Eastern Mediterranean, Washington is the key factor in coordinating efforts to push Greece forward and contain Turkey.

Washington and Athens share a similar concern about Turkey’s increasing military and geopolitical influence in the region. Washington’s efforts to bring Greece, Egypt, Israel, and the United Arab Emirates (UAE) closer to balance Moscow and Ankara is a mission impossible.

France is also playing along with this alliance, but Paris’ objectives do not overlap with those of Washington or Athens. Coordinating their interests may be much easier and much less costly for Ankara and Paris, than trying to contain each other in the Eastern Mediterranean and North Africa.

Washington’s efforts to reduce its dependence on Turkey in the security of the Black Sea is also another deadlock.

Washington has been expanding its military presence in Greece and Romania over the last couple of years to strengthen its presence in the Black Sea. The Biden administration will probably boost its security ties with Ukraine, and Georgia’s strategic significance will increase over the coming years.

The U.S. efforts to strengthen its standing, and encircle and balance Russia are contingent on too many complicated conditions. Alienating Turkey further will not help Washington’s efforts to counterbalance Russia in the Black Sea basin.

Politicians, analysts and pundits in Europe and the U.S. continue to claim that Turkey is not an inevitable asset for trans-Atlantic security. They try to convince decision-makers to punish and put more pressure on Turkey in order to regain Turkey’s loyalty.

Efforts to engage with opposition parties are another game plan to weaken Erdoğan and the People’s Alliance. Turkey is not the ally it used to be during the Cold War. Efforts to expand Turkey’s strategic autonomy and reduce Turkey’s dependence on imported military technology will continue, whoever controls the government in Ankara.

A reset between Ankara and Washington and Brussels seems to be problematic in the short run. Continuing the toxic stalemate is also costly to the interests of all parties.

Struggling to get more by insisting on the current dysfunctional impasse, both the U.S., the EU and Turkey are risking more losses.

All the parties seem to be in the mood for strategic patience to gain more. Working on some concrete confidence-building steps rather than waiting for a reset or complete avoidance will be a much better strategy to strengthen the trans-Atlantic partnership. Sooner or later, the parties will recognize this.

On anniversary, Erdoğan calls for West’s support in Syria
Next
Loading...
Loading...
We use cookies to ensure that we give you the best experience on our website. If you continue to use this site we will assume that you are happy with it.Ok