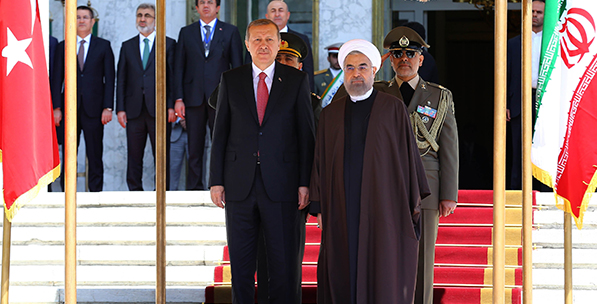 The timing of the critical visit by President Recep Tayyip Erdoğan to Tehran this week corresponded with a very sensitive regional and international conjuncture.

The timing of the critical visit by President Recep Tayyip Erdoğan to Tehran this week corresponded with a very sensitive regional and international conjuncture. The tug of war between Iran and the Saudi-led alliance over the sectarian-political future of Yemen, unambiguous criticism from Erdoğan concerning Tehran’s expansionist policies in the Middle East and populist reactions from Iranian political figures and finally, the nuclear agreement between the P5+1 and Iran promising the prospects of a gradual lifting of international sanctions in the long-term. Therefore, it was not surprising to see many commentators from both sides of the border calling for a cancelation or at least delay of the sensitive visit. Yet thankfully, everything went rather smoothly. When Erdoğan and Iranian President Hassan Rouhani were smiling at a curious press briefing at the end of deliberations, the scene reflected the common sense of two ancient societies with deep historical roots and a legacy of centuries-long competitive collaboration between them. Two societies with strong state and diplomatic traditions that could collaborate on fundamental issues while pursuing conflicting agendas in some others.

As far as the recent changes in global perceptions are concerned, Iran under Rouhani is seen to have acquired a new air of optimism vis-a-vis the West since the strategic shift of U.S. President Barack Obama’s administration concerning the nuclear issue in 2014. Therefore, the historic agreement between Tehran and the P5+1 could signify a major turning point in terms of the political and economic reintegration of Iran with the modern global system. But at the same time, the Iranian establishment maintains the pursuit of expansionist sectarian policies towars Iraq, Syria, Lebanon and Yemen working through Shiite paramilitary forces and meddling with local demographic dynamics. Hence, Turkey’s reaction to Tehran to recalibrate its carefully veiled presence across the region is understandable, despite positive developments on the nuclear agreement front, which was supported by Turkey along with Brazil.

From the vantage point of economic relations though, Turkey and Iran constitute two of the strongest socio-economic actors in the region, equipped with industrialization experience and qualified human potential. The cumulative gross domestic products of the two countries reach $1.2 trillion, and almost $2 trillion according to purchasing power parity. Turkey is the major manufacturing and agricultural exporter in the region with an annual export figure of $160 billion while Iran’s exports, dominated by crude oil and natural gas, are around $50 billion. Despite geographic proximity, bilateral trade levels are unsatisfactory, with Turkey’s annual exports to Iran being around $4 billion and imports from Iran hovering around $10 billion. So there is ample opportunity to increase trade levels between these uneasy neighbors and play into the theory of “complex interdependence” by using economic linkages as a tool to instigate political compromises.

Turkey has a competitive advantage in manufacturing industries led by the automotive industry, machinery and white goods as well as large-scale construction industries while Iran has a competitive edge in terms of energy costs due to its large natural gas and oil reserves. A rational strategy to create synergies seems to be the creation of “specialized production zones” on border cities such as Van where Turkish industrialists and Iranian energy suppliers could collaborate for mutual production initiatives. Integration of transportation and logistics routes through highways, railways and ports also constitute a critical step as Iran represents the shortest land route for Turkey’s exporters to Central Asia, while Trabzon, Turkey represents the shortest provision route for the industrial facilities in northern Iran from the Black Sea.

As the nuclear negotiations go through after June and prospects for a partial lifting of the international sanctions emerge on the horizon, Turkey

Overcoming Sectarian Tensions in the Middle East
Next
Loading...
Loading...
We use cookies to ensure that we give you the best experience on our website. If you continue to use this site we will assume that you are happy with it.Ok