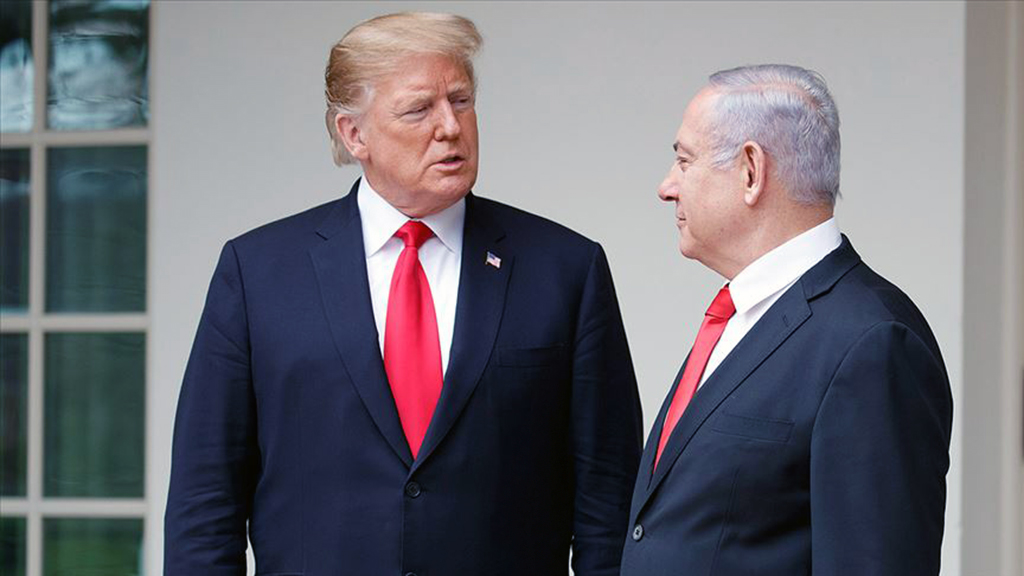 U.S. President Donald Trump took yet another step to legitimize Israeli expansionism after recognizing Jerusalem as Israel's capital last year. 'After 52 years it is time for the United States to fully recognize Israel's sovereignty over the Golan Heights, which is of critical strategic and security importance to the state of Israel and regional stability', Trump tweeted. Governments around the world reacted harshly to that decision.

U.S. President Donald Trump took yet another step to legitimize Israeli expansionism after recognizing Jerusalem as Israel’s capital last year. “After 52 years it is time for the United States to fully recognize Israel’s sovereignty over the Golan Heights, which is of critical strategic and security importance to the state of Israel and regional stability,” Trump tweeted. Governments around the world reacted harshly to that decision. President Recep Tayyip Erdoğan joined the chorus by pledging to disallow “the legitimization of the occupation.”It should go without saying that Trump’s announcement was an attempt to help Israeli Prime Minister Benjamin Netanyahu ahead of next month’s election. In addition to dispatching U.S. Secretary of State Mike Pompeo to Israel, Trump will host Netanyahu at the White House this week.

The Golan Heights have huge strategic importance for Israel. Just 60 kilometers away from Damascus, those hills are key to controlling Syria. At the same time, there are some 20,000 Jewish settlers and fresh water resources in Golan.

Trump’s statement was also significant for U.S. politics. The White House seeks to win over the Jewish lobby, which has traditionally enjoyed closer relations with the Democrats. In doing so, Trump wants to make more friends in Congress and, by extension, prevent his potential impeachment. Yet the decision goes beyond everyday politics. Trump is hell bent on uprooting Washington’s Middle East and Israel policy. His administration’s top priority is to undermine the existing international framework for resolving the Arab-Israeli conflict.

The U.N. Security Council’s resolutions 242 and 497 require Israel to retreat to its pre-1967 borders. Although those resolutions declare any seizure of Palestinian territory null and void, Trump refuses to recognize that framework. Instead, he is moving to recognize Israel’s control over eastern Jerusalem and the Golan Heights. The only missing piece in Trump’s road map is the West Bank, which he could bring up in the coming days to further strengthen Israel’s hand.

By taking those steps, Trump lays the groundwork for the “Deal of the Century,” which Jared Kushner, his son-in-law, negotiated and will be unveiled in April. According to the U.S. president, his administration’s only concern is to promote peace between Arabs and Israelis. He wants to succeed where his predecessors, including Barack Obama, failed by adopting a new bargaining strategy that forces Arabs and Palestinians to settle. Needless to say, Trump’s approach will not only fail to promote peace but also create more problems by breaking international law.

Here are some of the potential outcomes of Trump’s approach:

1. The U.S. could legitimize seizure of territory through occupation in other parts of the world. There are plenty of other countries which would be ready to ignore U.N. resolutions. The Russian annexation of Crimea immediately comes to mind.

2. The U.S. will lose its status as the go-between between Palestinians and Israelis. It will also lose any leverage over the Israeli right to sell them a peace deal. Consequently, it will be impossible to fall back on the 2010 talks or the Oslo process.

3. Israeli politicians will abandon the idea of offering territory to Palestinians in return for peace. With Trump’s help, the Israeli right, which was empowered by the Arab revolts, will mount pressure on other players.

4. It is possible to keep Arab leaders in line with the threat of Iranian expansionism, but the Arab street won’t recognize the occupation. Israel’s self-declaredexpansionist victory will make it a permanent enemy for the people in the Middle East and the Islamic world. That situation will not only fuel anti-Israeli and anti-Western radicalism but also cause a crisis of legitimacy for Arab governments signing off on a dishonorable imposition.

5. The Palestinian cause will evolve into an endless source of war and terrorism in the Middle East.

In any way, the Trump administration is implementing a road map with radical consequences. In doing so, it is planting the seeds of a new conflict in the region.

How foreign policy became a campaign issue in Turkey's local elections
Next
Loading...
Loading...
We use cookies to ensure that we give you the best experience on our website. If you continue to use this site we will assume that you are happy with it.Ok