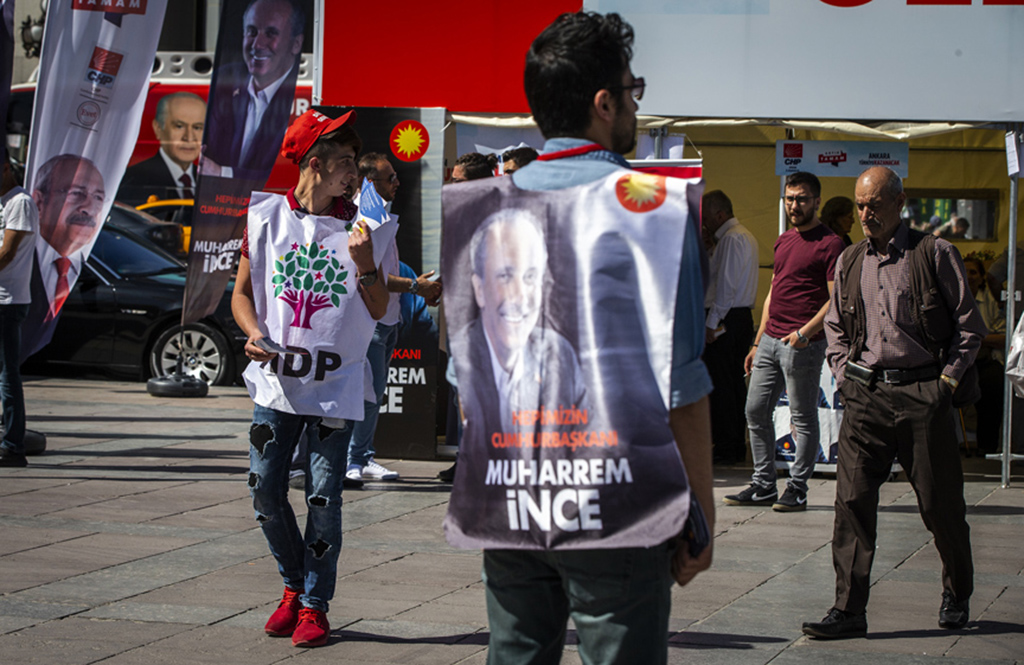 Time for Turkey to cast a ballot

The elections on June 24 – the first since the constitutional amendment referendum last year – will be an important turning point in the history of Turkish democracy.

The elections on June 24 – the first since the constitutional amendment referendum last year – will be an important turning point in the history of Turkish democracy.

That referendum changed Turkey’s governing system from a parliamentary system to a presidential one and for the first time since the first multiparty elections in Turkey, voters will elect a president and members of Parliament at the same time.

The early elections only entered Turkey’s political agenda in April with the statements of Nationalist Movement Party (MHP) leader Devlet Bahçeli. Shortly after a series of meetings, the Justice and Development Party (AK Party) and the MHP introduced legislation for the June 24 early elections; kicking off the election campaigning season.

For the last 50 days, Turkey has seen some dynamic election campaigning. The deputy and the presidential candidates organized campaigns and tried to win the hearts and minds of Turkey’s 59 million voters.

Turkish people overwhelmingly showed their interest in politics by joining the campaigns and participating in rallies despite the summer heat. Just like the previous elections, rallies have become the most significant aspects of the campaigns and attracted tens of thousands of people from all walks of life.

Most analysts expect that Turkish people will continue to show their interest in the election by going to the ballots on June 24. The turnout rate is expected to be more than 85 percent again. Because of the alliance system in this election, a predominant majority of the votes are expected to be represented in Parliament.

Of course, once again we witnessed some competition between public opinion polls. Compared to previous elections, we were presented with a higher number of public opinion polls this time around. The many public opinion polls in Turkey over the last two months have put President Recep Tayyip Erdoğan as the front-runner to win the presidential election. Even those who project that Erdoğan may not get 50 percent of the votes in the first round of the elections argue that it will be by a small margin.

The AK Party under Erdoğan’s leadership has won every election it entered since its foundation, and this election does not seem like it will be an exception. Unlike the previous election, opposition candidates this time organized campaigns to mobilize their voter bases. However, according to the recent polls they failed to attract votes from AK Party electorate pool. Instead, the Republican People’s Party’s (CHP) Muharrem İnce and Good Party’s (İP) Meral Akşener may steal votes from each other and the most significant number of swings voters were undecided between the opposition candidates.

This demonstrates the continuous problem of effective opposition in Turkey that can reflect in the ballot box. During the oppositions’ campaigns, İnce was able to consolidate the CHP votes, some of which were lost to the newly formed İP. While Akşener failed to meet the expectations of some, İnce turned out to be a better mobilizer of the CHP base than the head of CHP, Kemal Kiliçdaroğlu. This situation is expected to inspire a leadership struggle in CHP after the elections.If the public opinion polls projected accurate results and Erdoğan wins the election, following the election there will be a transitional period before Turkey switches to the new governance system. The details of the new administration system were unveiled by Erdoğan. It is an ambitious plan to reorganize the administration and governing mechanisms of the Turkish state.

Besides ministries, the new administration will also have councils to handle issues like foreign policy, national security and the economy. The implementation of this plan will start immediately after the election and the government will try to achieve a smooth transition to the new system.

In addition to preventing bureaucratic deadlocks, the new system will look to provide an effective executive and strong Parliament that will make laws. The structural reforms that are necessary for the economy and politics of Turkey are expected to be carried out by the government that will be formed in the aftermath of this election.

On the eve of the great transformation
Next
Loading...
Loading...
We use cookies to ensure that we give you the best experience on our website. If you continue to use this site we will assume that you are happy with it.Ok