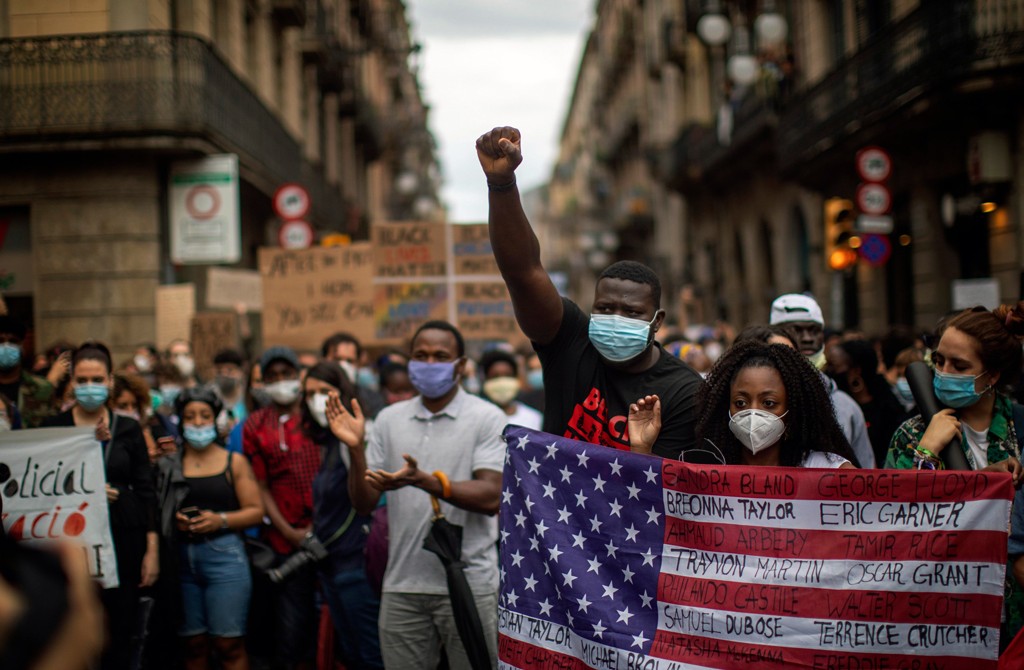 People gather during a demonstration over the death of George Floyd, Barcelona, Spain, June 7, 2020. (AP Photo)

The wave of riots in light of Floyd protests

The outrage over George Floyd’s death at the hands of a racist police officer, which triggered riots in 140 cities across the United States and forced President Donald Trump to threaten military action against protestors, highlighted the importance of "the streets." Attempts to reshape politics through street protests have repeatedly captured the world’s attention over the last three decades. The Velvet Revolution in Czechoslovakia, along with other anti-communist uprisings across Eastern Europe, was hailed as a new wave of democratization. Although that revolution resulted in Czechoslovakia’s partition, most observers celebrated its peaceful nature.

The outrage over George Floyd’s death at the hands of a racist police officer, which triggered riots in 140 cities across the United States and forced President Donald Trump to threaten military action against protestors, highlighted the importance of “the streets.” Attempts to reshape politics through street protests have repeatedly captured the world’s attention over the last three decades. The Velvet Revolution in Czechoslovakia, along with other anti-communist uprisings across Eastern Europe, was hailed as a new wave of democratization. Although that revolution resulted in Czechoslovakia’s partition, most observers celebrated its peaceful nature.

There was an initial expectation that the 2010 self-immolation of a Tunisian street vendor and the resulting Arab revolts would also trigger a wave of democratization in the Middle East and North Africa. With the help of the Gulf states, which advocated the status quo, Gen. Abdel-Fattah el-Sissi toppled the nation’s democratically elected government to reverse the Egyptian revolution of 2011. Syria and Yemen were dragged into prolonged civil wars. Tunisia still tries to stay on its feet thanks to the wisdom and sacrifice of Ennahda leader Rached Ghannouchi.

The main problem was that those peaceful protests were hijacked by violent radical groups. Lacking official leadership, the masses failed to replace old regimes with stable administrations. Worse still, external factors, including foreign intelligence services and their collaborators, could manipulate protests to maximize their own political interests.

Turkey was far more successful in countering street violence and managing its crises. Having successfully responded to the 2013 Gezi Park protests, which took a violent turn to become an act of looting and rebellion, Turkey cracked down on a series of outside interventions. The Gülenist Terror Group’s (FETÖ) 2013 judicial coup attempt and the PKK’s attempt to occupy Turkey’s southeastern provinces were systematically stopped. In the aftermath of the July 15, 2016 coup attempt, the Turkish government identified and disempowered parties complicit in such interventions, including FETÖ.

In Western democracies’ street protests, however, the legitimacy of their purpose did not lead to change. The yellow vests movements in November 2018 brought little more than torched cars and looted stores to the home of the French Revolution. The same goes for the United States, where street protests against institutional racism, a permanent feature of American life since the Civil War, quickly took a violent turn. The movement’s lack of official leadership and attempts by radical groups, including Antifa, to hijack the protests played into Trump’s hands.

We have thus witnessed many firsts in modern U.S. history. Police officers and the National Guard dispersed protesters near the White House so Trump could walk to St. John’s Church and hold a Bible for a photo op. Army Gen. Mark Milley, the chairman of the Joint Chiefs of Staff, appeared on the streets in a combat uniform, as the debate on the use of military force against American citizens represented a fresh crisis in the United States. Indeed, Attorney General William Barr accused “foreign actors” and “provocateurs” like Antifa of sowing unrest and violence, claiming that those groups used social media to divide the American people. Whether the latest riots will have an impact beyond the upcoming presidential election remains unclear. History teaches us, however, that politicians do not tend to benefit from placing their hopes in street protests.

In Turkey, the Republican People’s Party (CHP) has repeatedly turned to street rallies to try to remove the Justice and Development Party (AK Party) from power. The 2007 Republican protests, the 2013 Gezi Park revolt and CHP Chairman Kemal Kılıçdaroğlu’s 2017 “walk of justice” from Ankara to Istanbul immediately come to mind. At the same time, the Peoples’ Democratic Party (HDP) incited violence and a dozen innocent people were killed between Oct. 6 and Oct. 8, 2014. Even today, the radical groups guiding CHP leadership call for street protests. They have referred to Parliament’s decision to remove three representatives from the assembly as a “parliamentary coup” and talk about “learning from U.S. protests.”

If there is indeed a lesson to be learned, it is that taking to the streets hardly accomplishes anything and comes with a heavy price. Let us hope that Kılıçdaroğlu does not talk about “efforts to drag us into the streets” to legitimize the radicals’ move to incite street riots. The only legitimate way to transfer power is through elections. Turkey’s national will, which manifested itself during the July 2016 coup attempt, can protect it.

Sarraj's Turkey visit and a new era in Libya
Previous