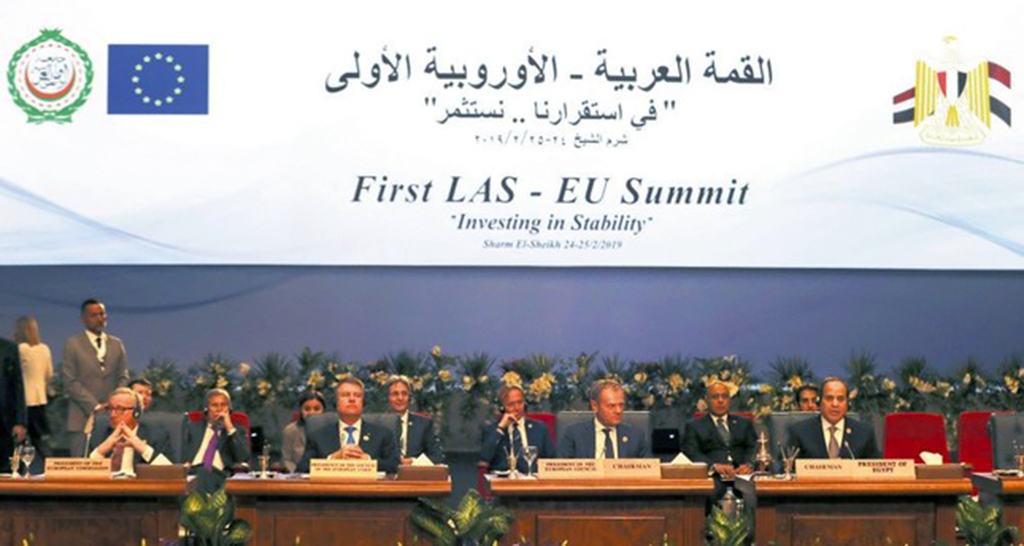 The ugly face of power

The Europeans are following in America's footsteps, revealing that they only care about their own interests. Their support for Egypt proves that

The Egyptian resort city of Sharm el-Sheikh set the stage for a curious event in recent days. Abdel-Fattah el-Sissi, the country’s usurper president, hosted the first European Union-Arab League summit. The items on the agenda included trade, the fight against terrorism and illegal immigration, ongoing conflicts in Syria, Yemen and Libya, and the Middle East peace process. The summit attracted representatives from 47 countries, yet European participants had higher profiles. European Council President Donald Tusk, European Commission President Jean-Claude Juncker, German Chancellor Angela Merkel and British Prime Minister Theresa May were present in Egypt. Those leaders came under criticism for ignoring the execution of nine young Egyptians by the el-Sissi regime last week. Their efforts to downplay Egypt’s human rights violations, use of torture and executions as “differences of opinion” came to be seen as a betrayal of European values. Critics argued that Europe chose the short-term stability that authoritarian leaders provided over “liberal values.” Before engaging in a discussion of those values, let us concentrate on the realpolitik dimension.

Bogged down in Brexit uncertainty, the European Union’s main interest in the Arab League’s member states is strategic. Brussels wants to balance against China and Russia in the Middle East and North Africa, from which the United States has gradually retreated. Having seen U.S. President Donald Trump implementing his “America First” policy, European leaders woke up to the fact that the European Union needed to take care of itself. After all, the cracks in the trans-Atlantic alliance are here to stay, and Europe is compelled to take precautions against Russia and China on one hand, and the brewing storm in its neighborhood on the other. Hence the emphasis by Europe’s leaders on their “real” interests. To address the threat of terrorism and illegal immigration from North Africa and the Middle East, they work more closely with authoritarian regimes.

Merkel and French President Emmanuel Macron, among others, care about stopping the influx of immigrants from Libya with el-Sissi’s help – not how many people he tortured or executed. To be clear, they did not make that choice just now. Germany and France rolled out the red carpet for el-Sissi in 2015 and 2017, respectively. It is no secret that Berlin cares about refugees and Paris cares about arms sales. As such, it is pointless to complain about the European Union is abandoning its policy of democracy promotion now.

The Arab Spring revealed that the idea of promoting democracy was but a fairy tale. When el-Sissi overthrew Egypt’s first democratically elected president, Mohamed Morsi, in 2013, it became clear that “values” were a legitimizing cover draped over interests. The European Union’s Syria policy reflected the same view. To be clear, the criticism of the Assad regime by Western governments, too, is about the refugee crisis rather than atrocities. They understand that the refugee crisis won’t end as long as Bashar Assad is in charge, and Syrians will keep marching to the gates of Europe.

Europeans like to blame the death of “liberal values” on Trump, but that is not necessarily the case. The Clinton, Bush and Obama administrations, which promoted a “liberal hegemony,” did not wholeheartedly embrace those values either. Instead, they used “liberal values” to conceal American interests. During that period, Washington intervened wherever it saw fit, only to fail to promote stability and democracy in those areas. The “values” of the Western-centric liberal order gave their final breath under U.S. President Barack Obama – and Europe did not even lift a finger to save them. On Trump’s watch, the powerful do not even try to legitimize themselves. Today, the Europeans follow in America’s footsteps to reveal that they only care about their own interests. Same goes for the Russians and the Chinese.

It is true that the face of power is ugly. Yet that’s a fact of life and Turkey must make its plans accordingly.

Think tanks hail Turkish-Ethiopian relations
Next
Loading...
Loading...
We use cookies to ensure that we give you the best experience on our website. If you continue to use this site we will assume that you are happy with it.Ok