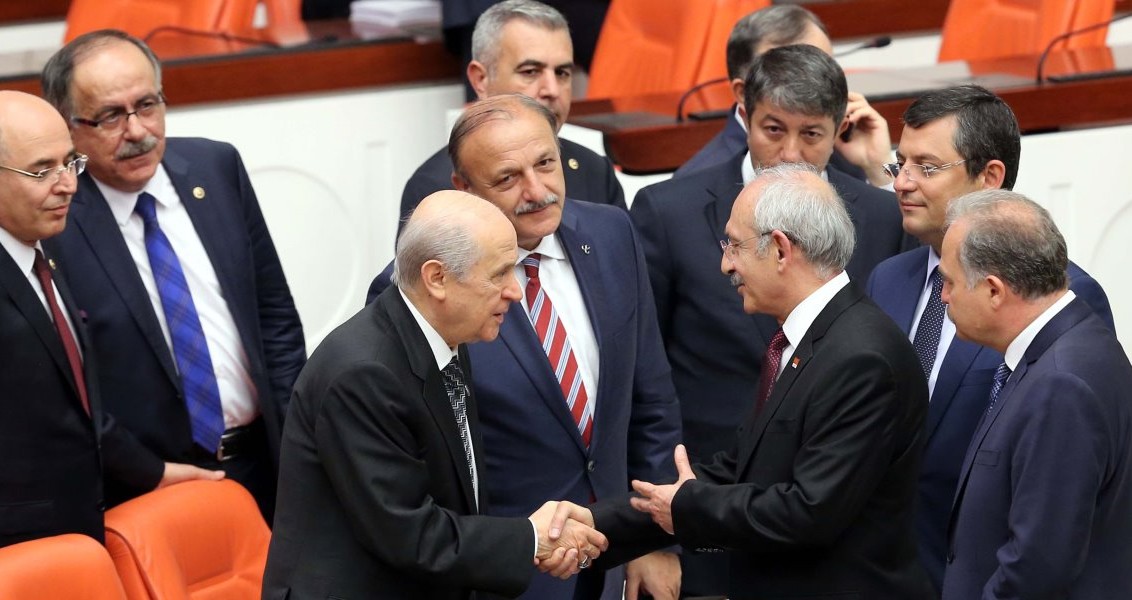 The State of Turkey’s Opposition Parties

The proposals from the opposition parties rest on the premise that something extraordinary is happening in the country today. But their argument is fatally flawed because the AK Party can score more points off extraordinary circumstances than the opposition.

Since President Recep Tayyip Erdoğan’s Justice and Development Party (AK Party) came to power in 2002, Turkey’s opposition parties have been obsessively trying to remove the party from power. Fourteen years later, they still cannot break the AK Party’s hegemony, which they find disturbing, sickening and unacceptable.

To be clear, the opposition’s numerous attempts to remove the AK Party government have been consistently unsuccessful. Having failed to score electoral victories, opposition parties recently resorted to extra-parliamentary measures including the Gezi Park protests, violent clashes during the siege of Kobani and the Gülen Movement’s 2013 coup attempts. When the AK Party lost its parliamentary majority in the June 2015 elections, the opposition had a historic opportunity.

But the PKK’s return to violence in July and the Nationalist Movement Party’s (MHP) uncompromising stance on a potential partnership with the Peoples’ Democratic Party (HDP), the PKK’s political wing, led to a repeat election in November, which the AK Party won in a landslide. Although a single-party government is good for stability, it further deepens the opposition’s existential crisis. Today, the hopelessness of the opposition parties places democratic politics at risk by fueling two extreme discourses.

First, opposition leaders have been talking about bloodshed and an impending civil war to twist the government’s arm. In recent weeks, leaders of the Republican People’s Party (CHP) and the HDP have raised this point repeatedly. Their claims are backed by anti-government political commentators who maintain that popular anger toward the AK Party could go beyond the Gezi Park protests.

The second risk, which emerged more recently, relates to the idea that Turkey’s supposed authoritarian turn was part of a global decline of democracy. The advocates of this claim argue that the rise of racism and far-right extremism in Europe and the United States reflects a broader trend. Today, a small number of people say they would consider leaving Turkey and become a citizen of another country.

To be clear, the proponents of the first option call for resistance and violence, which reduces them to a source of political polarization. Even though harsh words reflect the elite’s rage, this line of reasoning does not even enjoy support from the CHP and HDP’s bases. The ineffectiveness of this argument is closely related to Erdoğan’s leadership and the AK Party’s ability to change the conversation by fighting terrorism, dismantling Fethullah Gülen’s criminal network, promoting economic growth and improving the average citizen’s standard of living. The opposition crumbles into pieces when faced with the government’s success. Hateful and desperate, elites turn to leaving as a last resort.

The problem with the threat to leave Turkey, however, is that only a handful of well-educated citizens actually have this option. Sure, it is quite ironic that the places where they would rather live – Europe, Britain and the United States – have taken a dangerous turn against non-white ethnic groups and Muslims. Having come to terms with this, the opposition came up with two supposedly moderate proposals to either share political power or form a united opposition front.

By calling on the AK Party government to share power, the opposition essentially wants Turkey’s most popular politicians to behave like Rachid Ghannouchi’s Ennahda movement, which recently denounced political Islam, to stop democratic-Islamic demands from shaping the mainstream. This is their way of saying that the unique blend of Islam and secularism is undesirable.

Others maintain that the largest opposition parties must form a united front against the AK Party government under the pretext of strengthening the country’s democracy. Their plan? Inspired by the Turkish War of Independence, they would like to hold an emergency convention to create a viable alternative to the current government. Obviously, they are free to do as they please, but it might be a good idea to keep in mind that the AK Party leadership might snatch this narrative from the opposition.

The German Resolution: A One Sided Understanding and Reading of History
Previous

The Mission of the US President: Should He/She Accept It...
Next
Loading...
Loading...
We use cookies to ensure that we give you the best experience on our website. If you continue to use this site we will assume that you are happy with it.Ok