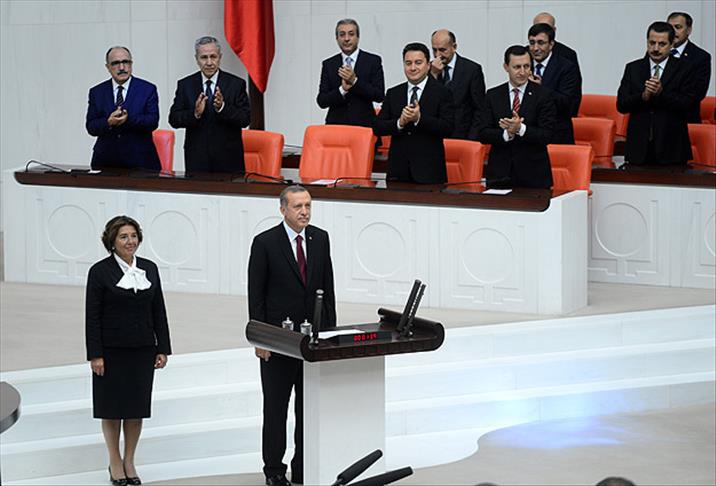 The start of a new era in Turkey

With the new system, Turkey has now caught a great chance to develop comprehensive policies to build a better future and prevent turmoil

President Recep Tayyip Erdoğan took his oath of office at Parliament on Monday and thus begins a new era in our nation’s history. The first presidential decree was subsequently issued to create the framework of Turkey’s new system of government. July 9, 2018 went down in the country’s political history as a day of extraordinary change.

Historians of the Turkish republic tend to disagree on “critical junctures” – namely, some scholars posit that the adoption of the Constitutions of 1961 and 1982, respectively, created the second and third republics. But there is a broad consensus that the Justice and Development Party’s (AK Party) 16-year rule was unique in its ability to transform the Kemalist secularist order. Still, it is possible to argue that all the steps taken up to Turkey’s official transition into its new presidential system aimed to overcome numerous hurdles.

Personally, I maintain that the adoption of the presidential system marked the beginning of the third stage of our history. Obviously, the first turning point was the proclamation of the republic in 1923. The second leap forward took place in 1950 when Turkey became a multiparty democracy. Moving forward, it would be best for professors of Turkish political history to use this method of definition.

By taking the oath on July 9, Erdoğan became the founding president of Turkey’s new system of government. Just as the creation of this new system was the result of his political struggle at home and abroad, so too will its institutionalization depend on his charismatic leadership.

At the same time, Erdoğan has set a precedent that will allow each future president to govern according to their model of choice. This fresh start makes it possible for him to seize two opportunities simultaneously. First, he could institutionalize a new system of government that remedies the shortcomings of the parliamentary system to end bureaucratic guardianship and address the problem of dual legitimacy. At the same time, he could bring about change within the AK Party to rid the movement of the baggage of the past 16 years.

Under this new model, which is open to revisions, the Turkish government can focus on strategic planning and coordination. It can promote an active, effective and risk-taking approach among senior leadership. Transforming the notion of government, not just its structure, can be on the nation’s agenda. Provided that the new system highlights competition between various players in the policy development process, it could transform Turkey’s static, slow and guardianship-prone bureaucracy based on performance and merit.

It is crucial for Turkey’s new governmental system to promote comprehensive change. Provided that Erdoğan’s goal is to deliver more economic welfare, democracy and freedom to Turkish citizens as promised in his election manifesto and statement for the June 24 elections, it is key to reach out to all parts of society.

The war on terror must continue uninterrupted as this new era revives hope about the future. Moving forward, the new administration must concentrate on microlevel improvements. At the same time, it must reconsider policies related to structural transformation, culture, education, higher education, agriculture, food and livestock. Likewise, the AK Party must take steps to empower local players over the next five years.

Turkey has paid a heavy price since 2013 to get to this point. Now is the time to develop comprehensive policies to build a better future and prevent turmoil. May this glorious new start serve our country well.