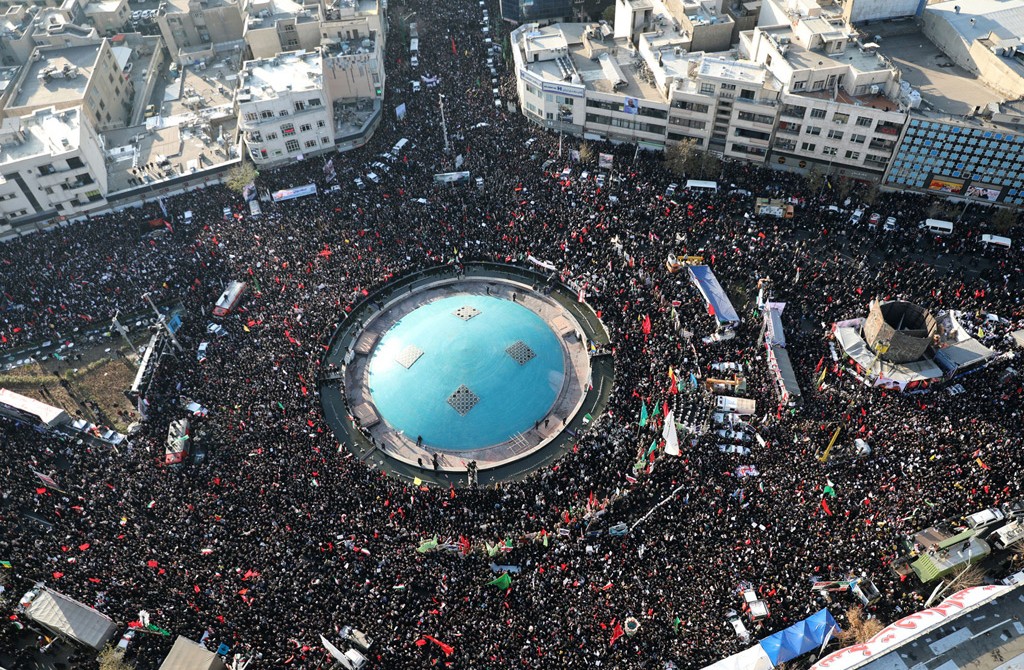 A drone photo shows thousands of Iranians attend the funeral ceremony of Qasem Soleimani, commander of Iranian Revolutionary Guards' Quds Forces, who was killed in a U.S. drone airstrike in Iraq, in Tehran, Iran on January 06, 2020.

Since the killing of Quds Force commander Qassem Soleimani and senior Hashd al-Shaabi leader Abu Mahdi al-Muhandis in a U.S. strike at Baghdad airport, the power struggle between the United States and Iran in Iraq has transformed into a hot conflict. Washington's latest move has the potential to irreversibly up the ante in the long-standing hostilities between the two nations.

Since the killing of Quds Force commander Qassem Soleimani and senior Hashd al-Shaabi leader Abu Mahdi al-Muhandis in a U.S. strike at Baghdad airport, the power struggle between the United States and Iran in Iraq has transformed into a hot conflict. Washington’s latest move has the potential to irreversibly up the ante in the long-standing hostilities between the two nations.

Here’s a quick rundown: Kataib Hezbollah, a wing of the broader Hashd al-Shaabi alliance of militant groups, fired rockets at a U.S. base in Kirkuk, Iraq, killing one American contractor. Washington responded to the attack by targeting the headquarters of Kataib Hezbollah, killing 25 militiamen. Tehran retaliated against the American attack by ordering Hasdh al-Shaabi fighters to raid the U.S. Embassy in Baghdad – to which Washington responded by killing Soleimani, al-Muhandis and six others. U.S. officials claimed that Soleimani, whom they considered a terrorist, was planning an imminent attack against American forces in Iraq.

Military officials from Iran and Iraq have been killed in a U.S. strike on Iraqi territory. In other words, Iraq is set to stage some kind of hybrid field battle between the United States and Iran. Baghdad is fearful and Tehran is outraged. Supreme Leader Ayatollah Ali Khamenei, among other Iranian officials, warned that Washington had “crossed the red line,” pledging vengeance in return.

An all-out war in the making?

Some observers are afraid that tensions between the United States and Iran will lead to an all-out war. Indeed, many have already described Soleimani’s death as a “1914 moment,” drawing parallels between his and the assassination of Archduke Franz Ferdinand – an act which sparked the tinder that produced World War I.

It would be highly unrealistic to think that a new world war could break out without Chinese or Russian involvement, despite Washington’s military hegemony. Indeed, U.S. officials urged Tehran to negotiate terms after the attack. Whereas Secretary of State Mike Pompeo reiterated his commitment to deescalating tensions, U.S. President Donald Trump was much more direct: “Iran never won a war, but never lost a negotiation.” Washington thus extended an invitation to Tehran to talk at the negotiating table. When thinking up a way to retaliate against the Americans, however, Iran needs to assess its own position first.

Iranian elites, including Soleimani, misjudged Trump. They falsely assumed that the U.S. president would not risk a hot conflict as the president claimed he would end the country’s trend of entering “endless” wars. The Iranians thought that Trump could not launch “selective” military operations against Tehran. Judging by reactions against the Aramco attacks and the seizure of vessels in the Gulf, Iran dismissed the possibility of Trump doubling down. Obviously, Washington’s decision to designate the Iranian Revolutionary Guard Corps as a terrorist organization was matched in both deed and rhetoric.

The question now is how, and indeed where, the Iranians will retaliate against the United States, seeing that Iran has sworn an oath to avenge the dead.

Retaliation will lead to many losses

Tehran finds itself between a rock and a hard place. It is clear that another act of retaliation will result in open war. A serious response from Iran could trigger U.S. action against even more senior officials. There is no way of knowing how Trump would respond to a new Iranian attack, given that he retaliated against the attack against the U.S. Embassy in Baghdad by killing Soleimani. Indeed, Washington’s next move could range anywhere between strikes on oil fields to a tactical nuclear strike.

On the other hand, if Iran responds to the Soleimani assassination too mildly, it will suffer greatly from the loss of its poster boy of Shia military expansionism – which would mark a huge blow to the Iranian regime. Soleimani was a founding leader of the Shia militia force that Tehran trained across the Middle East following the Iran-Iraq war. Sure enough, Soleimani was the single most important military and intelligence leader of Shia Iranian nationalism. Reporting directly to Khamanei, Soleimani also carried an inspirational story of success; a humble construction worker who went on to become the head of a military empire. In a way, his story embodied the best success of the revolution, representing a personification of his country’s spirit of resistance.

Soleimani’s assassination has inflicted irreparable damage to Iran’s “Axis of Resistance.” Washington now threatens to go beyond targeting official military commanders, along with all Iranian militias in the region. Tehran’s response now is set to determine the fate of U.S.-Iran tensions.

Mediterranean powers unite against Turkey, seeking ways to limit Ankara's moves in region
Next
Loading...
Loading...
We use cookies to ensure that we give you the best experience on our website. If you continue to use this site we will assume that you are happy with it.Ok