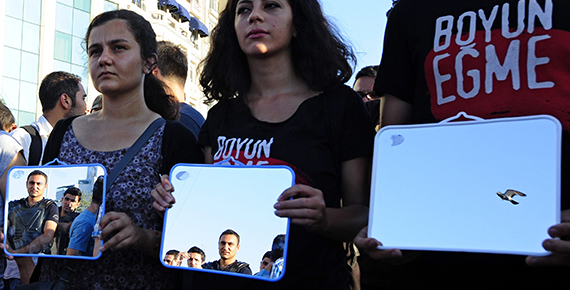 The Psychology of the Gezi Park Protesters

There are four main emotions that the Gezi Park protesters were moved by: elitism, defeat, despair- hopelessness and fear-paranoia.

With a retrospective look, it is possible to define the protests as an objection to the fact that the ruling Justice and Development Party (AK Party) and/or Prime Minister Recep Tayyip Erdoğan construct the New Turkey. Some of the protesters took to the streets because they are against the elimination of the old Turkey and the formation of the New Turkey no matter who constructs the new Turkey while some others took part in the protests because they are against the formation of the new Turkey by the AK Party and/or Erdoğan although they supported the elimination of the old Turkey and the construction of the new Turkey. What united these two groups with incompatible political visions was not the demand for democracy but the presumption that Erdoğan will shape the future. Adopting a reactive attitude rather than a proactive one, protesters, poured into the streets not for voicing some demands but for raising their objections. As one can see from the slogans such as “Enough is enough” and/or “Kahrolsun Bağzı Şeyler” (Lit. God Damn Some Things) Gezi protesters did not have a claim, target or argument. They instead had objections; they were dissatisfied and angry. It will, therefore, be more correct to understand and analyze the psychology of the protesters and why they protest rather than focusing on what they demand.

ELITISM AS A REFERENCE

There are four main emotions that the Gezi Park protesters were moved by: elitism, defeat, despair- hopelessness and fear-paranoia. The protesters experienced emotions at different levels but these emotions, in the end, provoked emotional stress. The leading emotion felt by all social groups and actors among the protesters from the very beginning of the demonstrations was elitism. Elitism was the number one emotion led to other three emotions. It is possible to see political, cultural, ideological, economic and denominational kinds of elitism in the Gezi Park protests. Elitism of some groups manifested in the form of a requiem for political-economic-cultural privileges that they lost during the AK Party ruling while elitism of some groups manifested in the form of a failure to accept the success and gains of religious-conservative groups who were marginalized for a century. From this perspective, one can argue that elitism united nationalist groups who attempt to sustain the militarist tutelary system and the liberal left groups who are against this. Owing to the elitism, the nationalist groups were offended by politics and democracy as these turned out to serve to the AK Party in the last decade and they resorted to undemocratic ways.

However, it is necessary to analyze the hesitation of the left-liberal groups, who surpass others in their pursuit of democratizing the political system, due to the fact that the AK Party is taking necessary steps towards democratization. That the groups, who were considered as reactionist, uneducated and peasant for years, put democratization to the top of the political agenda and eliminated tutelary bastions one by one caused great tension among left-liberal groups. The tension was manifested in the “Yes but not enough” attitude adopted on the September 12, 2010 referendum. The expression “not enough” was introduced to draw attention to the lack of democracy in the regulation; however, it was a lament about the elimination of the tutelary system by the AK Party and a manifestation of concerns that this regulation will politically strengthen the AK Party. What i

A Year of Morsi and the Power Struggle
Previous

Tahrir Between a Rock and a Hard Place
Next
Loading...
Loading...
We use cookies to ensure that we give you the best experience on our website. If you continue to use this site we will assume that you are happy with it.Ok