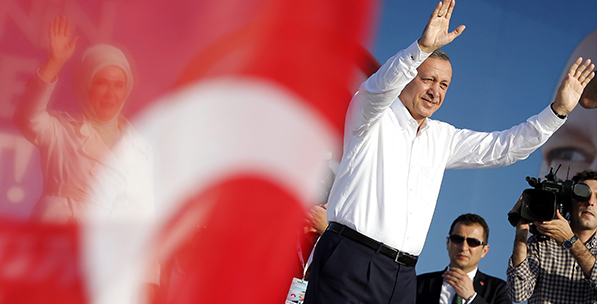 In the future, the 2014 presidential election in Turkey will serve as an oftencited example of the difference between political engineering and genuine politics.

In the future, the 2014 presidential election in Turkey will serve as an oftencited example of the difference between political engineering and genuine politics.

The opposition could have initiated their search for the most popular and acceptable contender against Prime Minister Recep Tayyip Erdoğan a little earlier. In fact, the chairmen of the Republican People’s Party (CHP) and the Nationalist Movement Party (MHP) could have participated in the race themselves rather than fielding an outsider. Either way, the presidential vote would have been more exciting and persuading voters to go to the polls would have been an easier task for the opposition parties. The leaders of both the CHP and the MHP, however, could not afford a defeat against Erdoğan and, unwilling to facilitate the rise of other prominent figures from party ranks, they opted to nominate a retired bureaucrat for president.

Another mistake was to launch a joint presidential campaign. For some reason though, they were convinced that this was the only way to deny Erdoğan a first-round victory. Had each party participated in the race individually, their voters could have rallied behind one of their own and an impromptu alliance would have emerged in the second round. At the end of the day, it became clear that launching a joint campaign and nominating Ekmeleddin İhsanoğlu failed to boost the opposition’s popularity and appeal to the bases of multiple parties. Such miscalculations, of which İhsanoğlu became an embodiment, shows that the opposition had picked political engineering over genuine politics. The downside of backroom projects, however, is that they often yield unpredictable results and, in the end, inflict serious and lasting damage on their masterminds.

İhsanoğlu is participating in the race as the representative of various social groups with irreconcilable differences. Even reading the names of the nine political parties that endorsed him out loud establishes just how absurd an enterprise the whole campaign has been, and anti-Erdoğan sentiments alone keep the group together. In this sense, İhsanoğlu represents every voter who does not want to see Erdoğan in the presidential palace – which is exactly why he has had embarrassing gaffes and frustrated supporters.

Singing the praises of the Democratic Party of the 1950s, he upsets the CHP base. Trying to maintain his campaign’s delicate balance, he turned to left/socialist symbols but caused outrage among nationalists. As such, İhsanoğlu cannot motivate his supporters without political statements but each political statement makes it more difficult to keep the fragile coalition together.

The situation is hardly different for Selahattin Demirtaş, who represents the Kurdish nationalist Peoples’ Democratic Party (HDP) in the race. His campaign sought to address the Kurdish political movement’s desire to reach out to the entire country through simplistic projects rather than genuine political initiatives. Instead of building on the Kurdish political movement’s political experience to expand his base with reference to democracy, the Demirtaş campaign has thus far relied on anti-Erdoğan populism in the hope of finding convenient shortcuts to popularity. In this regard, he has sent mixed signals to the electorate for the sake of speaking to multiple constituencies and re-invented his rhetoric from scratch. In doing so, Demirtaş revised his position on the Kurdish peace process, Gezi Park protests, and the Gülenist shadow state.

Both campaigns have established that seemingly brilliant ideas developed behind a desk have a tendency to lose their edge in front of real people and therefore fail to yield the desired results. Inability to meet targets, in turn, discredits all players that have a vested interest in such efforts. Most important, however, is that these failed attempts water down the quality of politics and jeopardize the meaning of political activity. They place the people’s ties to politics and their confidence in political institutions at risk.

The Role of Islam in Turkish Foreign Policy
Next
Loading...
Loading...
We use cookies to ensure that we give you the best experience on our website. If you continue to use this site we will assume that you are happy with it.Ok