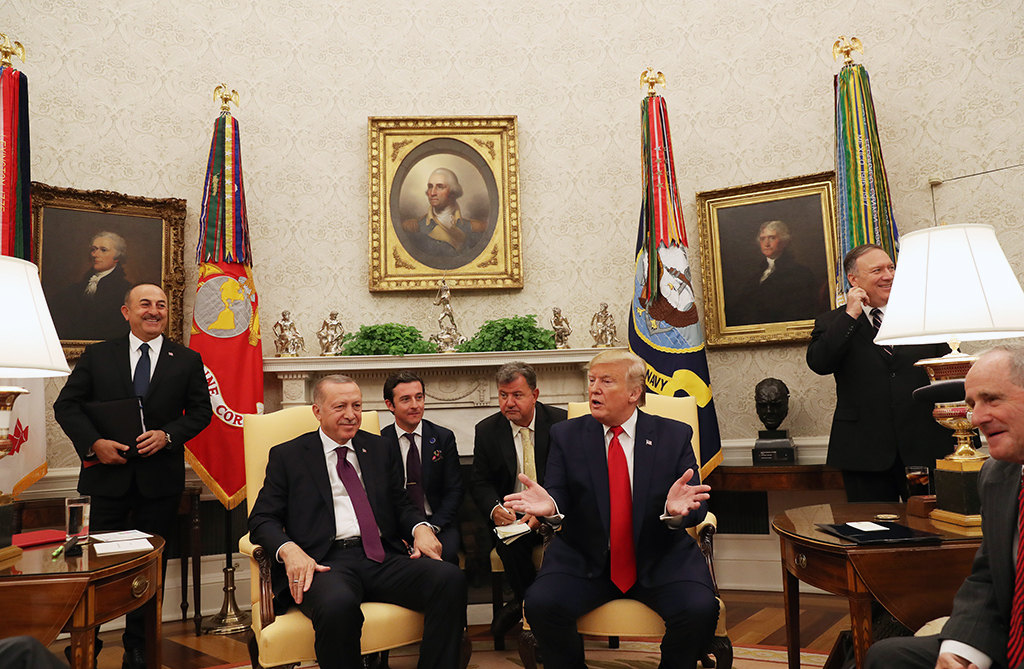 The obvious outcomes of the Erdoğan-Trump meeting

President Recep Tayyip Erdoğan's meeting with U.S. President Donald Trump has contributed positively to bilateral relations. Their commitment to working together and continue negotiations was one of the meeting's concrete outcomes.

President Recep Tayyip Erdoğan’s meeting with U.S. President Donald Trump has contributed positively to bilateral relations. Their commitment to working together and continue negotiations was one of the meeting’s concrete outcomes.

There is no point in dreaming about Turkey and the U.S. solving all of their bilateral problems, including the terrorist groups, the Gülenist Terror Group (FETÖ) and People’s Protection Units (YPG), in the short run. Those issues became what they are over long years. Some, perhaps, won’t ever be resolved.

It is no secret that Ankara and Washington have different views on the future of bilateral relations and the fate of the international order. That difference of opinion manifested itself most clearly in Erdoğan’s discussions with a group of U.S. senators.

When the Russian S-400 air defense system came up, one of the senators asked the Turkish president whether Turkey saw Russia or the U.S. as the enemy. That question revealed the perception gap regarding the spirit of the Turkey-U.S. alliance.

From the American perspective, harboring FETÖ’s ringleader and arming the YPG, the designated terrorist organization PKK’s Syrian branch does not amount to a betrayal of Turkey. Nor does the U.S. seem to believe that inviting the YPG’s leader, who is wanted on an Interpol red notice, to Washington is an act of hostility. Yet U.S. senators dare to ask Turkey whom it sees as its enemy when Ankara moves to buy Russian military equipment.

The U.S., which once told countries around the world that they were either with or against Washington in the war on terror, has no problem joining forces with a terrorist entity, describing that partnership as temporary. In doing so, the U.S. blurs the line between friends and adversaries. Indeed, Erdoğan’s response to that senator’s question was a perfect summary of the new balance of power, “I want to be friends with both the U.S. and Russia.”

In my view, the Turkish president did more than saying that he favored win-win relationships. He went further, hinting that there were many questions in his own mind: is it possible to Washington’s policy toward Turkey as friendly?

If Turkey and the U.S. are allies, why doesn’t Washington support Turkey’s counter-terrorism efforts – or, at a minimum, refrain from sponsoring terrorist entities like FETÖ and the YPG?

Does it make sense to treat today’s Russia as the Soviet Union of the post-World War II period?

Why would it be a problem for Turkey to buy the S-400 air defense system from Russia, seeing that NATO fails to give support to Turkish defenses?

As the U.S. abandons multilateral partnerships for bilateral relationships, can it expect Turkey to part ways with its interests from dealing with Russia for the sake of NATO?

Recalling the aftermath of the 2015 Russian jet downing incident, can Turkey count on NATO or the U.S. next time Ankara is at odds with Moscow?

There are many more questions to be asked. Yet their focus remains the same. Turkey won’t approach Russia in friend-versus-enemy terms – which would hurt Turkish interests. This is in line with the new rules of the game. Unless Washington reshapes its policy toward Turkey to address those questions, bilateral tensions will persist indefinitely.

The obvious outcome of the Erdoğan-Trump meeting was the realization that the S-400 issue is at the heart of the current dispute – and the mutual commitment to keep negotiating. Diplomatic talks give both sides time to keep tensions under control. In the meantime, Ankara and Washington could work together to ensure the repatriation of Daesh fighters and to secure financial support for the resettlement of 1 million refugees in the Syrian safe zone. That their resettlement will take place according to the UNHCR criteria will encourage the EU to pitch in as well.

As such, the top item on Turkey’s agenda will be the repatriation of Syrian refugees to northern Syria.

Highlights of the Erdoğan-Trump meeting
Previous

Last nail in the coffin: US decision on illegal Israeli settlements
Next
Loading...
Loading...
We use cookies to ensure that we give you the best experience on our website. If you continue to use this site we will assume that you are happy with it.Ok