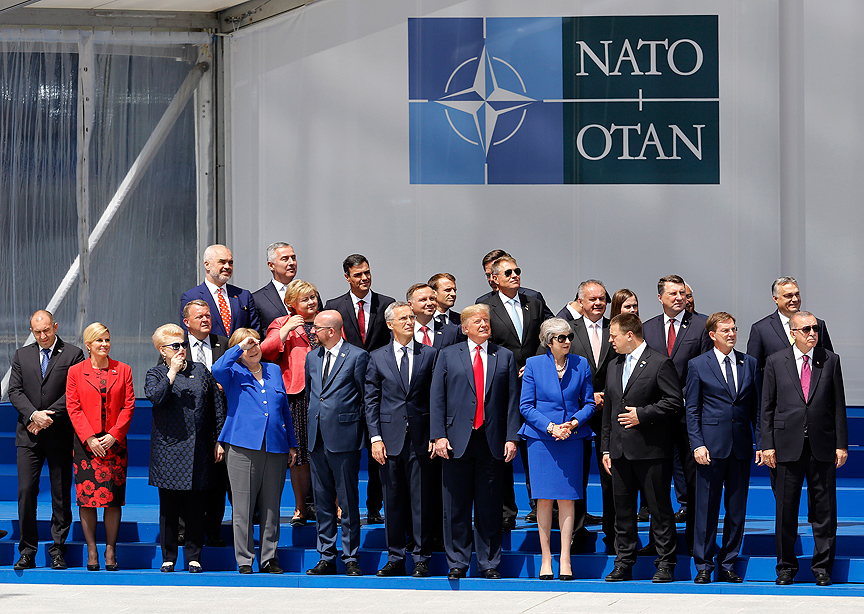 The NATO Summit and the future of transatlantic relations

It seems that Western unity has slowly shattered over the last decade with most Western or Western-dominated international organizations starting to splinter.

It seems that Western unity has slowly shattered over the last decade with most Western or Western-dominated international organizations starting to splinter.

On one hand, Western countries have faced many challenges with the European Union, NATO and other platforms; on the other hand, traditional Western values, such as liberal democracy and liberal economics, have begun to deteriorate over the last several decades. Similarly, Western politics, economics and society as a whole have been increasingly facing substantial threats. There are several significant reasons for this decay and challenges.

First, increasing illiberalism in the West has begun to threaten the main liberal values that provide an expedient environment for social development and peaceful coexistence. Increasing xenophobia, racism, ultra-nationalism and anti-Islamism uncovered illiberal Western traditions. It is important to understand that currently there is a division not only between Westerners and non-Westerners, but also between Westerners themselves. Namely, there are many fault lines that divide and alienate Western countries from each other. For instance, there is increasing friction between the relatively robust economies of the North and volatile economies of the South.

Second, the Western world has lost its common enemy. Throughout the Cold War, most Western countries stood behind the U.S.’ struggle against all global and regional threats. However, Western countries have different national priorities today. While the U.S. administration expects European countries to contribute more to the NATO budget, the latter refuse to increase their defense budgets. On the other side, while Washington requests that EU members refrain from buying oil and natural gas from Russia, European countries continue to cooperate with Russia in many economic sectors.

Third, European countries intend to maneuver independently, while the U.S. wants to continue the current hierarchical relations. Many European countries do not consider Russia an imminent threat and therefore, claim that they do not need American protection anymore. Furthermore, due to the unpredictability of U.S. President Donald Trump’s behavior, European countries worry that the U.S. president could bargain away European security to improve U.S. relations with Russia.

Fourth, the future of NATO was and is closely associated with the future of the EU. Maintaining the unity in military and security issues requires cooperation in other sectors, especially in economics. However, the U.S. administration has been following a nationalist, unilateral and therefore contradictory economic policy toward Europe. Considering the European trade surplus with the U.S., Trump has declared Europe as “as bad as China.”

Finally, despite his unilateral and bullish approach toward other states, Trump indirectly designates the U.S. as an ordinary global power rather than the hegemon of the world by refusing to provide the main global public goods, i.e. free trade and liberal democracy. In other words, by asking its allies to spend as much as the U.S., Trump downgrades the U.S.’ global position.

These factors have directly impacted NATO. In this framework, the NATO summit in Brussels will be remembered as a milestone in the organization’s history for two reasons. First, the number and the kind of threats – besides traditional threats, unconventional threats such as cyberwarfare and international terrorism emanating from non-state actors – facing NATO have increased. Compared to threats emanating from states such as Russia, deterrence policy is more difficult to apply against these new threats. Therefore, partnering with the U.S. would allow them to tackle these threats more efficiently.

Second, the Trump administration’s foreign policies and its approach to NATO have begun to differ from those of European countries. Many European politicians now believe that maintaining the unity of NATO has become significantly more difficult. However, the intra-EU problems restrain the alternative course of actions for the bloc’s countries.

In conclusion, the NATO summit will produce significant results that will lead to the redefinition of transatlantic relations. European countries may ask the U.S. to withdraw from the continent and to search for a new international system, which may contribute to the already increasing polarity. As I have said earlier, Trump continues to push the U.S.’ limits and to cut the branch that his country sits on by alienating and fighting with its European allies.

The start of a new era in Turkey
Previous

Western bloc crumbles as US-EU rift emerges
Next
Loading...
Loading...
We use cookies to ensure that we give you the best experience on our website. If you continue to use this site we will assume that you are happy with it.Ok