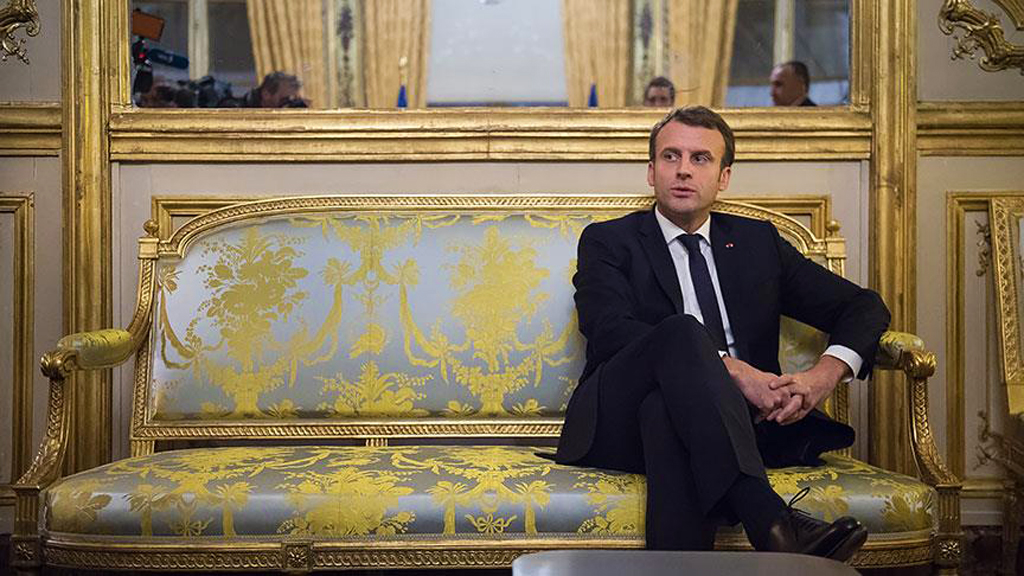 For the last several weeks, French President Emmanuel Macron has been targeting Turkey and President Recep Tayyip Erdoğan in his statements about regional developments in the Middle East and Eastern Mediterranean. Although it is not uncommon for him to make such undiplomatic positions when it comes to foreign policy, his recent remarks about Turkey demonstrate that his tone is becoming more aggressive than it used to be.

For the last several weeks, French President Emmanuel Macron has been targeting Turkey and President Recep Tayyip Erdoğan in his statements about regional developments in the Middle East and Eastern Mediterranean. Although it is not uncommon for him to make such undiplomatic positions when it comes to foreign policy, his recent remarks about Turkey demonstrate that his tone is becoming more aggressive than it used to be.

There are several reasons for this aggressive tone, but his attempt to present himself as a new actor in the region and use this stature in order to divert attention from his chronic problems plays an important role in his choice of words nowadays.

Just before the eruption of the COVID-19 crisis at the NATO summit in London, Macron irritated almost all of the participants by declaring the organization “brain-dead.” This important meeting had to start in the midst of debates regarding his words and the statements overshadowed a needed summit among the allies.

Although Macron tied his position to the lack of American leadership in the organization, he was also openly reacting to the U.S. decision to withdraw from Syria and Turkey’s operations against the YPG/PKK targets in that country’s north. It was not entirely clear why he was against Ankara’s operations in northern Syria and how his statements criticizing a NATO ally’s fight against terrorism would contribute to the strength of the organization. It was also not clear what France was offering for the future of NATO.

After failing to convince U.S. President Donald Trump not to withdraw from the Iranian nuclear deal and after making a fiery speech at the Congress where he called more American engagement in the world, Macron started to argue a more independent foreign policy and a reset of relations with Russia.

The contradictions and confusions during this period were part of the domestic protests and unrest he was facing in France. Macron was trying to gain stature for himself as a major international figure while losing control domestically.

His engagement with Libya and the Eastern Mediterranean was part of this foreign policy driven by failure. After a confrontation with the Turkish navy, he called NATO – the same group he insulted just a few months earlier – to take steps against Turkey.

When he was unable to garner support from most NATO members, however, he suspended France’s role in Operation Sea Guardian. Following this failure, he started to make statements supportive of Greece’s claims in the Eastern Mediterranean, and his disputes with Turkey grew.

It was clear that Macron was not trying to resolve the tension and differences between Greece and Turkey as he mostly wants to “punish” Ankara in the region. He made this intention known during his remarks last week on Turkey. In fact, he more specifically stated that he is willing to take steps against Erdoğan.

According to Macron, what was generating crises in the Eastern Mediterranean was essentially Ankara and its leader Erdoğan. Following these statements, there were demonstrations and protest emails against France in Turkey. Both opposition and governing parties were united against Macron. While he was trying to distinguish the Turkish people from the country’s president, he one more time failed to reach his goal, further unifying the actors and parties in the Turkish political spectrum.

It seems, however, that Macron will not give up as a result of these mistakes. His attempt to increase the militarization of Greece in the Aegean Sea and his push to heighten the conflict in the coming months will generate more failure. He may talk about his foreign policy objectives, but soon the French people will also start to understand Macron’s diversionary maneuvers.

Europe must get off the Macron-Mitsotakis bandwagon
Next
Loading...
Loading...
We use cookies to ensure that we give you the best experience on our website. If you continue to use this site we will assume that you are happy with it.Ok