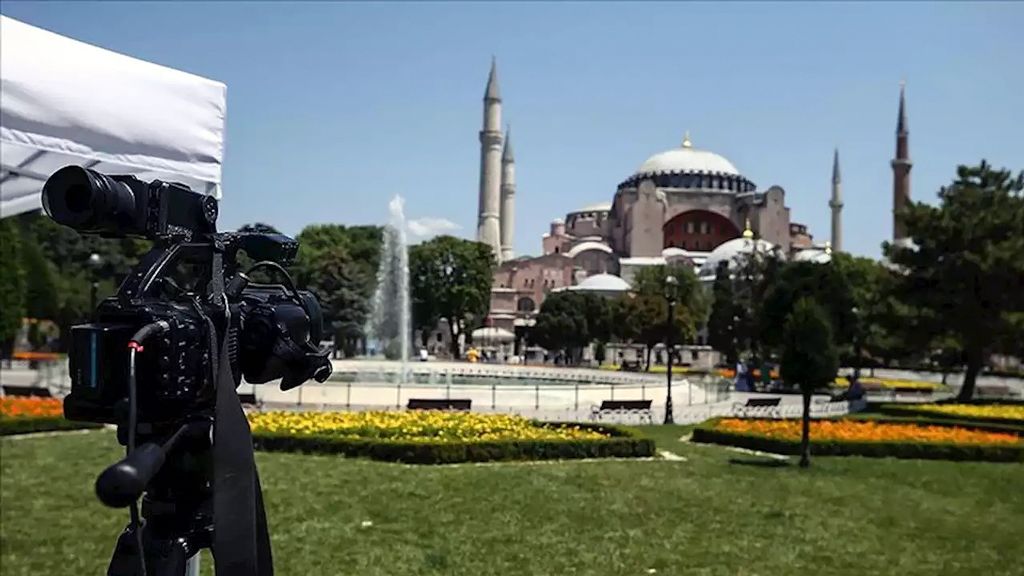 The July 15 effect and Hagia Sophia

Today marks the fourth anniversary of the July 15 coup attempt in Turkey. This is a time to remember how the people foiled the Gülenist Terror Group's (FETÖ) conspiracy to overthrow the country’s democratically elected government.

Today marks the fourth anniversary of the July 15 coup attempt in Turkey. This is a time to remember how the people foiled the Gülenist Terror Group’s (FETÖ) conspiracy to overthrow the country’s democratically elected government. The years fly by so fast, but it is imperative that we remember and remind others of what happened on that fateful night. July 15 went down in history as a heroic nation’s defense of democracy against internal and external enemies. The popular will that manifested itself in front of tanks was proof that Turkey was prepared to become an active player on the international stage, able to determine its own future. A quick look back at Turkey’s recent steps in the areas of foreign policy and national security reveal how important July 15 really was.

Over the last four years, FETÖ’s undercover operatives within Turkey’s state institutions have been identified and dismissed. Two hundred seventy-five out of 289 legal cases pertaining to the failed coup have been concluded. As President Recep Tayyip Erdoğan, whom I interviewed for the magazine Kriter this month, said: “Our military got back on its feet with the dismissal of the traitors within. That cleanse was behind the recent accomplishments of our armed forces, from counterterrorism to international operations.” The new political footing that July 15 generated facilitated the Euphrates Shield, Olive Branch and Peace Spring operations in Syria. Turkey has since adopted the presidential system and taken bold steps in Libya and the Eastern Mediterranean. Finally, last week, the Hagia Sophia was reinstated as a mosque.

The July 15 coup attempt was part of the reason why opposition parties, starting with the Republican People’s Party (CHP), did not protest the Hagia Sophia’s conversion into a mosque. Although the main opposition leader Kemal Kılıçdaroğlu dismissed the crackdown on coup plotters as a “civilian coup,” he understands that his party cannot win elections unless it stops clashing with the Turkish people’s values and symbols. Consequently, he has dialed down his critique of the Justice and Development Party’s (AK Party) steps to promote religious freedom and meet popular demands and claimed to have made his peace with Islamic symbols like the headscarf and mosques. Although a CHP parliamentarian urged the government to “convert the Blue Mosque into a museum” as an expression of repressed ultra-secularism, Kılıçdaroğlu called for the Hagia Sophia’s reinstatement as a mosque amid objections from his party’s radical wing. He thus ignored criticism from his own colleagues that the Hagia Sophia’s conversion was demanded by a small group of Islamists, rather than all conservatives, and the accusation that the CHP leadership “bowed to Islamists” as they “avenge the republic.”

Kılıçdaroğlu shared his concerns about objecting to the Hagia Sophia’s conversion into a mosque as follows: “They were going to convert it, and if we were to object, they were going to say: Look! These infidels are opposing this move.” There are four reasons why the CHP chairman was concerned.

First, Kılıçdaroğlu did not want to shoulder the baggage of the single-party regime’s ultra-secularist legacy, hence his refusal to claim that the AK Party government was “reversing Mustafa Kemal Atatürk’s decision.” At the same time, the main opposition party did not want to join Western governments in their critique of that decision to avoid fresh accusations from the pro-government People’s Alliance regarding the opposition’s allegiance. Thirdly, Kılıçdaroğlu did not wish to start a fight over symbols with Erdoğan – which he would have certainly lost. Last but not least, he did not want to be at odds with Turkey’s conservatives and nationalists in the post-July 15 universe of symbols and values. After all, the CHP leadership would like to win over conservative voters in the 2023 elections.

What I found most interesting was the remarks of Ali Babacan, whose Democracy and Progress Party (DEVA) tends to make liberal and pro-Western arguments, saying that he hoped the government “carefully considered the implications.” Like the pro-PKK Peoples’ Democratic Party (HDP), he attempted to send a message to Western governments.

Is it possible that Kılıçdaroğlu, unlike Babacan, understands that Western pressure on Turkey over the Hagia Sophia’s conversion would play into the People’s Alliance’s hands? Or is this some new assignment of roles? Either way, the spirit of the July 15 resistance is the main reason why no party could vocally oppose the Hagia Sophia’s reinstatement as a mosque.

The impact of the July 15 events on Turkish politics
Previous

Cevdet Yılmaz: FETO a danger for 'all countries'
Next
Loading...
Loading...
We use cookies to ensure that we give you the best experience on our website. If you continue to use this site we will assume that you are happy with it.Ok