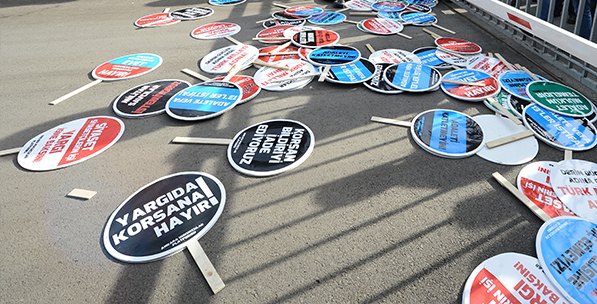 The Judiciary’s Intervention in Politics

The political institution must make legal and institutional arrangements in order to save the sphere of politics from tutelary mechanisms.

As of the 1990s, one of the most frequently debated issues among jurists in Turkish political life has been that the sphere of politics is determined by the Judiciary in terms of the “judicialization of politics”. The main reason behind this claim was that the Judiciary, starting with the Constitutional Court, was intervening in the scope of political parties and, most of the time, barring parties and politicians from politics – if not found palatable by the “regime”.

In that period, the Judiciary would set up a kind of “special judgment mechanism” mainly by using bureaucratic mechanisms through special information, practice and instruments fabricated and special networks established among institutions. First, relevant political strata would be put on target through a special operation on perception and political engineering (method), and then the crisis would be deepened by exploiting the “media” and other communication tools. Therefore, materials necessary for prospective reasoning of the Judiciary were being fabricated first, and then the same justifications were used again to provide legitimacy for the decisions of judges.

Given the “judicial crisis” after the December 17, 2013 operation (against the government) and debates among jurists – although the content is different – what we see is the enthusiasm of a group of judges to bring similar processes into the game during the periods of conjunctural splits according to what and how they have learned previously. The prosecutions through media and by the “media judges” even before the announcement of verdicts in courtrooms may be seen as a sign of this learned way of conduct. Furthermore, networks and mechanisms of informal relations, which are often said to exist in judicial and bureaucratic operations, corroborate this state of affairs.

Such a judicial mechanism introduces a structure that shapes the system according to its own worldview and interests by creating its own legitimacy within its own network. Inclined to intervene in politics for the (so-called) security of the regime in the 1990s, the judicial bureaucracy now is trying to circumvent politics for the survival/future of “an entity references of which are quite unclear or obscure”.

Being exempted from institutional oversights this structure positions itself at a supra-political level and tries to accomplish a new system of tutelage. Therefore, the very same entity trims the capabilities of governments to exercise politics, and narrows and shapes the sphere of politics.

THE MISSION OF POLITICS AND THE CHP’S DEMEANOR

When it comes to reacting to encroachment on the sphere of politics and preventing the judicial tutelage, the political institution must be the first to play a part . It must make necessary legal and institutional arrangements to clear the political sphere, where democracy operates, from tutelary mechanisms. After the December 17, 2013 crisis, the Justice and Development Party (AK Party) government has announced that the bill proposing a structural change in the Supreme Board of Judges and Prosecutors (HSYK) is prepared in this regard. Again, preparatory works to abrogate the Special Authority Courts (ÖYM) and the Counter-Terrorism Law aims the prevention of autonomous units, formed or to be formed, in the Judiciary.

As much as the government, opposition parties have the responsibility for the operation and cleaning of the political sphere from tutelary. The main opposition Republican People’s Party (CHP) is the one that has been complaining about the “autonomous units” in the Judiciary in recent years. Given the statements issued by the CHP leader Kemal Kılıçdaroğlu regarding the Ergenekon and the Balyoz (Sledgehammer) cases in the past, it would be illuminating to remind his following remarks about the said cases and their judges: “Judges at the Silivri concentration camp do not have (any) respect f

Photos of the Atrocity: Bringing the Human Tragedy in Syria to International Law
Previous