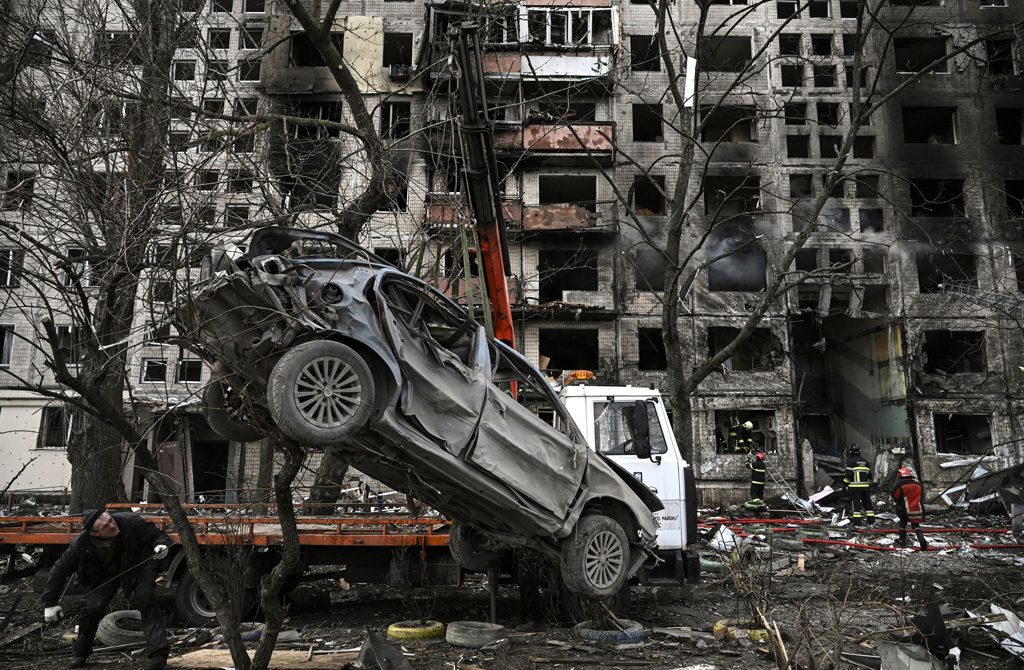 A crane removes a ruined car from in front of a destroyed apartment building after it was shelled by Russia, in Kyiv, Ukraine, March 14, 2022. (AFP Photo)

The impact of Ukraine war on the Middle East

Although the Middle Eastern countries are not active parties to the Russia-Ukraine crisis, the ongoing war will have repercussions on the region

With the Ukraine war, which is considered one of the main milestones in recent world history, some of the main principles of international politics and the discourses that accompany it have changed. The previous milestone was the 9/11 terrorist attacks against U.S. hegemony. The 9/11 attacks closed the “end of history” political discourse and the period of “ultimate victory” won by the liberal West. With the Russian invasion of Ukraine, the period of “the global war on terror” that began with the 9/11 terrorist attacks is now over. The “global rivalry between global powers” is on the rise, and the U.S., Russia and China are the main players in the new period.

Since the global rivalry has led global powers to follow realpolitik in their foreign policies, many regional powers such as Brazil, India, Germany and Turkey have been trying to increase their autonomy in order to protect their national interests against these global powers. Most global powers tend to violate basic principles of international law, rules and norms. Not only Russia and China but also Western global powers often violate the very basic principles of the international system they themselves established. Regional powers and small states do not trust the big powerful players; now the Ukraine war has shown the world why mid-sized powers should not trust the big powers either.

The Ukraine war has turned out to be more than a regional problem, it is a global one. Marking the beginning of a new period, the conflict has significant global implications. The Middle East region is not exempt from these implications. However, unlike most of Europe, Middle Eastern countries have been following a relatively neutral policy towards the Russian invasion of Ukraine. While continental European countries that were questioning the effectiveness and meaning of the NATO alliance have gathered around the U.S and consolidated the Western front, Middle Eastern countries have not changed their balanced position towards the crisis.

Turkey has been following a policy of “strategic neutrality” during the Ukraine war. Turkey has repeatedly explained that even though it considers the Russian military intervention illegitimate and a violation of international rules, it urges resolving the crisis through diplomatic means. Following an active and flexible policy, Ankara offered to mediate between the warring sides and managed to bring the foreign ministers of the two countries together in Antalya.

Through diplomatic negotiations, Turkey has been trying to prevent the spillover effect of the war. The U.S. and other Western countries have realized that Turkey has not sided with Russia and that it is still a NATO ally. That is, Turkey’s place in the global rivalry is evident and its place is with the West. Turkey is not seeking a new alliance. If Western countries reconstruct trust between the West and Turkey and recognize the country’s strategic autonomy, Turkey could play a more effective role in its region, resisting Russian and Iranian expansionism in the Middle East.

On the other hand, Iran has found itself in a very interesting position. Iran was about to sign a nuclear deal with the U.S, but the Ukraine war has dramatically changed the ground for a new agreement. While the U.S. was ready to sign the deal, Russia has blocked it. Moscow has mobilized all of its capacity in all platforms to undermine the functioning of the system as a response to the sanctions against it. In addition, if the U.S. reaches an agreement with Iran, it will probably withdraw from the Middle East, since Washington wants to downgrade its presence in the region to concentrate on its trans-Pacific and trans-Atlantic relations. This new regional setting may create further problems for the U.S. and especially for its regional allies such as Israel and the Gulf states.

It is expected that if Russia gets stuck in Ukraine, Moscow will gear down in the Middle East, an important detail for the Syrian crisis in particular. In the Syrian case, Iran will try to fill the power vacuum and will continue to compete with other actors such as Turkey. If this scenario unfolds, the U.S. and other Western countries, besides Israel, may evaluate the situation and reorient themselves accordingly. With Russia concentrating on the Ukrainian front, Iran will attract more pressure in the region. Therefore, it is not happy about the normalization processes in the region. Iran has been wary about the future of the region and reads the normalization process as a development that will damage its regional perspective.

Israel is yet another Middle Eastern power that follows a relatively neutral policy towards the Ukrainian war since it has good relations with both sides. Similar to other regional states, Israel follows a middle ground policy. It has different policy preferences in the region. For instance, the U.S. has been prioritizing the struggle against international terrorism in the Syrian crisis while Israel has been trying to prevent Iranian expansionism.

Finally, almost all Arab countries have also been following a relatively neutral policy towards the Ukrainian war. They have not followed in the footsteps of the Western countries. There are several reasons for their neutral policy. First of all, they have lost their trust in Western countries, particularly the U.S., after the Arab insurgencies and revolutions. The U.S. withdrawal from Afghanistan and the Russian invasion of Ukraine have consolidated their mistrust towards the West. They do not consider Western countries reliable partners anymore.

Second, Western countries often question the regional policies of Arab states. Even traditionally unquestioned Gulf states such as the United Arab Emirates (UAE) and Saudi Arabia are frequently criticized by Western countries for their policies towards regional crises such as Yemen. Third, Russia and China have emerged as better alternatives and more reliable partners since these two global actors do not question their policies. The bilateral relationship between the Arab states and Moscow and Beijing is purely based on interests without any political conditions.

A new paradigm in diplomacy
Previous

Turkey-EU relations in light of Scholz's visit
Next
Loading...
Loading...
We use cookies to ensure that we give you the best experience on our website. If you continue to use this site we will assume that you are happy with it.Ok