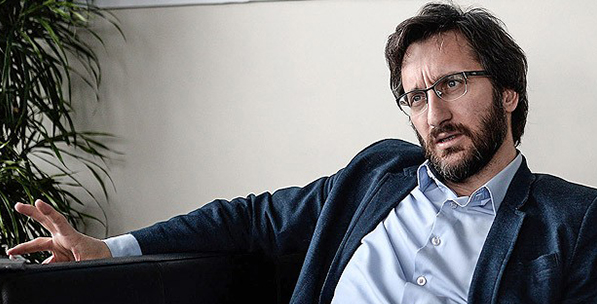 The Foundation for Political, Economic and Social Research’s (SETA) İstanbul General Coordinator Fahrettin Altun blames the Gülen Organization, which has been declared a terrorist organization by the State of Turkey, for muddying the political arena in the country. He has called the political parties “politically incompetent” as they have given in to the discourses of the illegal Gülen structure.

Altun shared his views with Turkey’s state-owned Anadolu News Agency correspondent on the election process and political party discourses. He defended that in a realistic window of opinion, the governing Justice and Development Party (AK Party) will have a landslide victory again on June 7, 2015 as it has been the case in the last 13 years.

Altun, asserting that opposition parties’ main strategy is to fray out the governing party, went on to say that the main opposition has no strategy for itself to rule the country, but instead directly targets the ruling party and exercises a strategy to wear out the party in government, and this unites almost all the parties in opposition around a common discourse.

SETA’s İstanbul General Coordinator predicts a cross-fire of accusations among the opposition actors after the elections whether or not the pro-Kurdish People’s Democracy Party (HDP) overcomes the 10 percent national election threshold, and that is an indication of how incapable the opposition is to breath in new political dimensions.

Portraying the HDP co-chair Selahattin Demirtaş and the HDP as pro-peace although they instigated the violence during the October 6-8 incidents has only to do with eroding the governing party. The only reason for the opposition parties from way-different shades of the political spectrum to join forces against the government is to halt the social and political transformation process led by President Recep Tayyip Erdoğan, according to SETA’s Altun.

THE ILLEGAL STRUCTURE LOST THE BATTLE IT STARTED

Altun noted that the Gülen organization is an illegal structure which has clearly exposed itself after the plot against the Turkey’s National Intelligence Organization (MİT) on February 7, 2014.

“This structure has infiltrated into Turkish bureaucracy and the State in the 1990s by developing a strategy to take over the government. During this period, the only way to come to power was to exploit the bureaucracy. But after the beginning of the 2000s, transparent and open politics of democracy has gained strength owing to the normalization of politics in Turkey. This structure positioned within the bureaucracy has failed to adapt to such an overt transformation of state mechanisms and seriously wished to chart out its own path to become a state within the state by following a main strategy to come to power by exploiting bureaucracy. They openly demanded a share in the Erdoğan government, the minute they were rejected they waged war against the government. But, they have lost the war they had started destroying their credibility on the course.”

He said the Illegal Structure has muddied the political arena in Turkey through manipulations and by fabricating self-conflicting and contradicting discourses every day.

The main opposition composed of the Republican People’s Party (CHP), the National Movement Party (MHP) and the pro-Kurdish People’s Democracy Party (HDP) do politics via the discourses of this illegal organization, added Altun.

“This structure itself is against open and transparent politics; they are against political parties and crystal clear party mechanisms. We have seen this in their plots against the CHP and the MHP. That means, we are not talking about a structure only against the AK Party. The existence of political parties which have already given in to the discourses of this organization has definitely something to do with political incompetency and incapability to develop and conduc

The Inevitability of System Change in Turkey
Next
Loading...
Loading...
We use cookies to ensure that we give you the best experience on our website. If you continue to use this site we will assume that you are happy with it.Ok