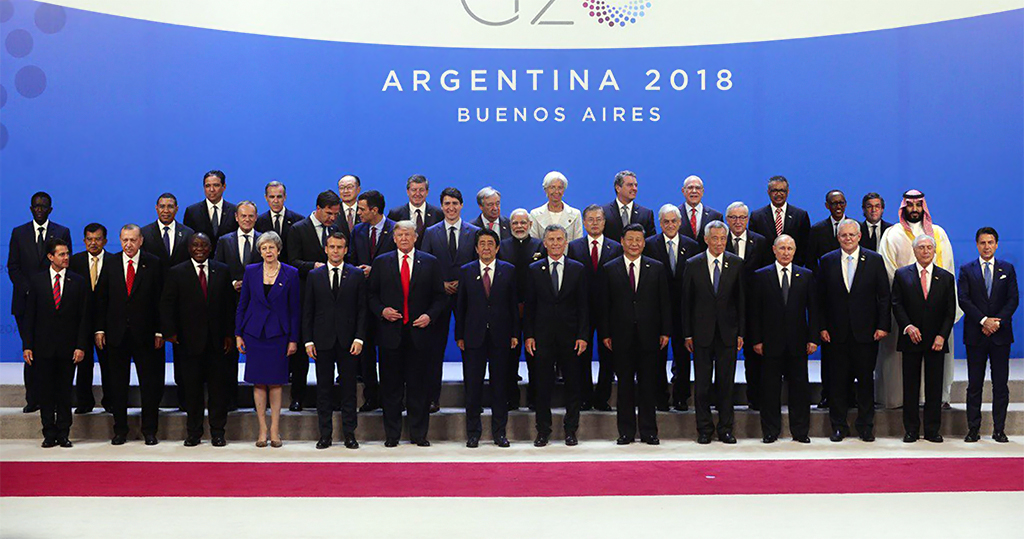 The rapid changes and challenges for the world order have generated a number of debates about the direction of the international system. There have been indicators about the decline of U.S. leadership and concerns about the vacuum that this might bring to the system. There have been different acronyms in regards to rising powers in international relations, such as the BRICS (the bloc consisting of Brazil, Russia, India, China and South Africa), and uncertainties on how these powers can help to stabilize an increasingly unraveled world. Different forums were offered for managing a mechanism to bring a collective solution for these global problems. Some offered that coordination between the two economic superpowers, the U.S. and China, would be necessary to deal with global problems. Others raised the necessity of an expansion of the original G7 and G8 groupings that would include rising powers as well. These recommendations were regarded as only ideas for the first few years of the new millennium, but then push came to shove with the global economic crisis.

Countries started to see that it is really urgent and vital now for these countries to come together and try to find collective solutions to problems. Thus, although some refer to these meetings as G zero, meaning that every country will try to pursue its narrow self-interest despite the global extent of existing problems, some exhibited a significant level of optimism about potential transformations of these summits to a meaningful body. Because of that, the first summits took place twice a year. Since the first summit in Washington, D.C. 13 of these high level gatherings have taken place. The scope of the summits also increased to include parliamentarians, businesspeople and youth. In spite of the perceived benefit of increasing interaction and understanding and constituting a forum for world leaders to debate issues, in some issue areas the G20 summits failed to fulfill the expectations of many around the world.

There were concerns that this gathering could turn into another ineffective mechanism for discussion without any solution. This year, President Recep Tayyip Erdoğan spent a large portion of his press conference on these rising concerns and the way forward for the G20. It was important that he raised the problems of the organization and underlined that it should be more than a photo op for world leaders.

In his press conference, President Erdoğan mentioned significant achievements accomplished by the organization over the last 10 years since it was first convened. He also mentioned that this platform is not important just for member states but also for issue areas on its agenda it has become a significant actor in shaping the international system. Thus, he argued it becomes increasingly important to increase the power and prestige of this forum. He further emphasized that a forum that represents a large portion of the world population and world economy should not be the prisoner of debates focusing on the narrow self-interests of some member states. Throughout his press conference he repeated his previous position on the necessity of reforming existing global institutions, such as the security council of the United Nations and even the present status and structure of the World Trade Organization. Thus he indicated that the G20 should not turn into another of these increasingly obsolete international gatherings and said the Osaka summit needed to focus on the coverage and functionality of the organization.It is very obvious that the trajectory of these summits will be critical for their credibility in the world. Today, one of the most significant causes of a lack of credibility of these institutions has been the increasing irrelevance of such organizations for the concerns of many in the world and the inability of these organizations to resolve problems. Now, many people question if the G20 will suffer from the same problems. In a world debating trade wars, territorial disputes and economic competition, a failure of the G20 will make it harder for countries to trust multilateral settings and summits to resolve global problems. For the G20 not to have similar credibility problems, the organization and other members of the organization must pay attention to warnings such as the recent one voiced by President Erdoğan. He, in the meantime, mentioned that Turkey is ready to take all the responsibility about improving the standards, strength and stature of the G20 and other member states should show the same commitment.

Some tips to save Ankara-Washington ties
Previous

The perils of a 'German Islam' project
Next
Loading...
Loading...
We use cookies to ensure that we give you the best experience on our website. If you continue to use this site we will assume that you are happy with it.Ok