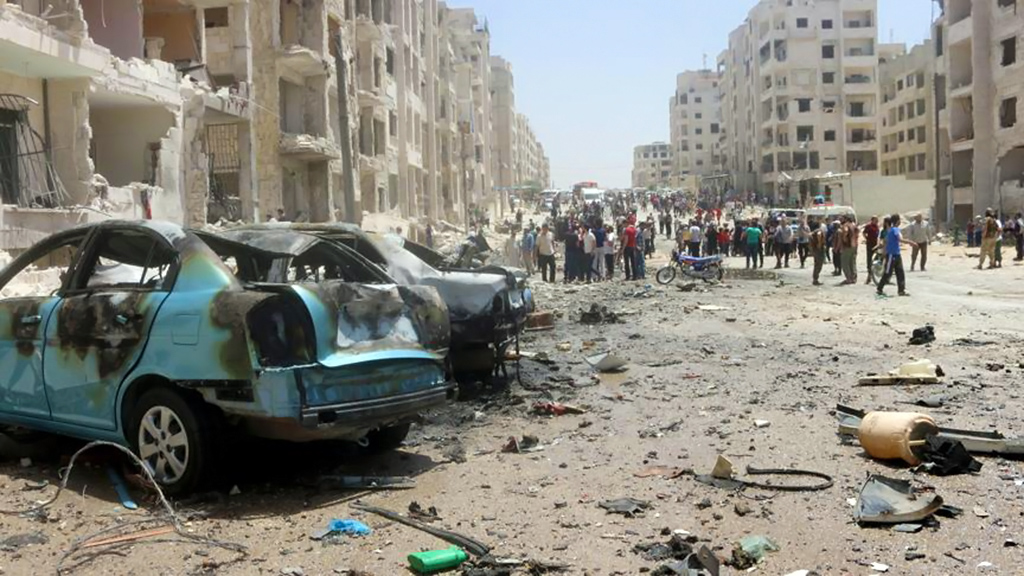 The fate of Syria depends on Idlib

The crisis in Idlib has brought the question of Syria to the top of the agenda one more time for the world.

The crisis in Idlib has brought the question of Syria to the top of the agenda one more time for the world. The tragedy that has been going on for the last seven years has reached another critical juncture. For the last seven years, the international community turned its head the other way while the regime was committing the worst atrocities in recent history. The regime killed civilian protesters, arrested kidnapped, tortured and executed political prisoners, used missiles to destroy cities, killed civilians in opposition-held areas, bombed towns with barrel bombs, attacked hospitals, schools and emergency workers, and used chemical weapons that killed countless children in cities.

The atrocities generated millions of refugees that sought refuge from surrounding countries and millions of internally displaced people. This situation generated another serious humanitarian disaster when the international community demonstrated less sensitivity than needed to the refugees.

After showing insensitivity for the last seven years, now the international community that failed in multiple different tests is facing another very serious exam in Idlib. This one, however, is even more serious than previous tests. The regime and its allies are prepared to attack a city with approximately 3 million civilians living in it. Most of these residents of Idlib are internally displaced people that fled from the violence that was incurred to them in the cities and towns of Syria by the regime. Everybody watching the unfolding of the civil war in Syria has learned the meaning of the airstrikes by the regime and its allies. These airstrikes have been responsible for most of the atrocities and casualties in war. Now, after so many years of bloodbath, the regime aims to adopt the same strategy one more time.In the summit in Tehran, Turkey warned Iran and Russia as well as the international community one more time about the humanitarian consequences of a possible military operation. Turkey warned that the airstrikes will generate mass civilian casualties and the ensuing flow of refugees will generate another massive crisis that will be hard to handle. Even rumors of the chemical weapon attacks must have caused serious anxiety in the people of Idlib. The attacks to the centers of the White Helmets demonstrated the potential violence.

However, Turkey seemed to be alone again in its humanitarian concerns about the Syrian crisis. Since the beginning of the crisis Turkey has been the only actor that has become part of all peace efforts for the war in Syria. Both in the Astana and Geneva processes, its priority has been ending the conflict and providing a peaceful solution. At this point, in order to stop the violence there should be the cooperation of other “concerned” parties as well. Both the European and U.S. administration are expressing concerns about a potential operation, but at this point there should be more than words. The concerns in regards to the use of chemical weapons should not be the only problem.

The Idlib crisis can be an opportunity for the “concerned” states to think about a long term strategy for the Syrian question. While fighting against terrorism and terrorist groups, it is also important to deal with the humanitarian crisis in the region. Turkey has been stating for a long time now that the emergence of terrorist groups is the consequence of the situation in Syria. The stabilization of Syria is particularly important in order to prevent Syria from exporting insecurity to other countries in the region. This will also necessitate the commitment and effort of different countries around the world. Both the humanitarian and security crises should be resolved simultaneously. This means more responsibility for superpowers like the U.S. to contribute to this process and stop its inaction and indecisiveness.

Other European countries, including Germany, France and Britain, also need to step up to fix the situation in Syria. So far Turkey has contributed to this process the most and can become the facilitator of a new phase for peacemaking and stabilization if the other major powers decide to become part of it.

The outcome of the Tehran summit
Previous

How Trump benefits from the 'coup'
Next
Loading...
Loading...
We use cookies to ensure that we give you the best experience on our website. If you continue to use this site we will assume that you are happy with it.Ok