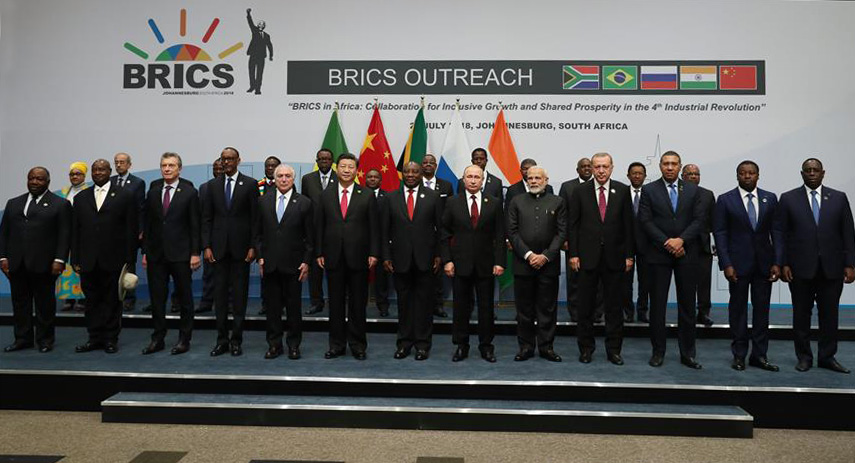 The evangelical burden and the destructiveness of threats

Last week, President Recep Tayyip Erdoğan traveled to South Africa to attend the 2018 BRICS summit along with a group of journalists, including myself.

Last week, President Recep Tayyip Erdoğan traveled to South Africa to attend the 2018 BRICS summit along with a group of journalists, including myself. The summit was key to the strengthening of relations between Turkey and the world’s rising economic giants. Moreover, President Erdoğan held successful talks with the leaders of Russia and China – which is what I originally wanted to write about until a new crisis broke out between Washington and Ankara.

Speaking at the Ministerial to Advance Religious Freedom, U.S. Vice President Mike Pence made some remarks about pastor Andrew Brunson, who faces terrorism charges in Turkey. Recalling that “the American Founders enshrined religious freedom as the first freedom in the Constitution of the United States,” he proceeded to accuse Nicaragua, China, North Korea, Russia and Iran of religious persecution. Finally, Pence portrayed Brunson as a “victim” of the aftermath of the July 15, 2016 coup attempt in Turkey. He added that Brunson’s placement under house arrest was insufficient and threatened the Turkish government with “significant sanctions.” The same threat was made by U.S. President Donald Trump on Twitter.

In my column penned on July 23, I discussed the various risks that the diplomatic traffic between Turkey and the United States entailed, and noted that the main problem was Washington’s disregard for the security concerns of its allies and insistence on having an asymmetrical relationship with them. That attitude, coupled with Mike Pence’s eagerness to start the Republican Party’s campaign for the midterm election and the greed of the evangelicals, created this mess. One could add that Washington’s inability to manage the diplomatic process was an additional factor.

To be clear, diplomacy takes time and requires patience and uninterrupted communication. If any given party focuses on domestic politics at the expense of negotiations, they end up missing opportunities. Issuing threats, in turn, escalates tensions, creates new problems and destroys mutually-agreed road maps. The public already knew that Turkey and the U.S. were engaging in diplomatic talks within the purview of the “third working group.” The question is what resulted in the collapse of negotiations. U.S. officials would like to believe that the Turks missed a great opportunity. The Turkish government, by contrast, holds the Trump administration’s lack of coordination and focus accountable for the train wreck. U.S. Secretary of State Mike Pompeo and Pence had differences of opinion, they note.

Until now, Turkey was talking to Secretary Pompeo and National Security Adviser John Bolton. It seems that their failure to keep Mike Pence in the loop or Pence’s failure to resist the temptation of populism resulted in the collapse of diplomatic talks. Under pressure from evangelicals, President Trump followed suit and decided to exploit Brunson’s situation to score political points.

In other words, Secretary Pompeo’s hard work was ruined by a single tweet. To make matters worse, Trump referred to Brunson as “a great Christian” to fuel religious tensions. Trump’s threat of sanctions, which coincided with “punitive” efforts by Congress, means that Turkey’s enemies on Capitol Hill and those seeking to exploit the Brunson issue for political gain have joined forces.

Of course, Turkey and the United States could easily launch new efforts to address their existing problems. Nor did last week’s train wreck happen for the first time. But there is a notable difference between the most recent developments and the collapse of diplomatic negotiations on Rex Tillerson’s watch. Desperate to alleviate domestic pressures on his administration, President Trump moved from criticizing Turkey to threatening Turkey. We already know that he adopted a more aggressive, threatening and nationalistic language in his encounters with Washington’s allies in Europe. At the end of the day, the threats issued by Trump, who has been accused of Islamophobia for recognizing Jerusalem as the capital of Israel and other reasons, will inevitably fuel anti-Americanism in Turkey.

One way or another, the Trump administration will have to find a way to keep the evangelicals under control. Otherwise, the next crisis could lead to very serious consequences.

The world of alternatives
Next
Loading...
Loading...
We use cookies to ensure that we give you the best experience on our website. If you continue to use this site we will assume that you are happy with it.Ok