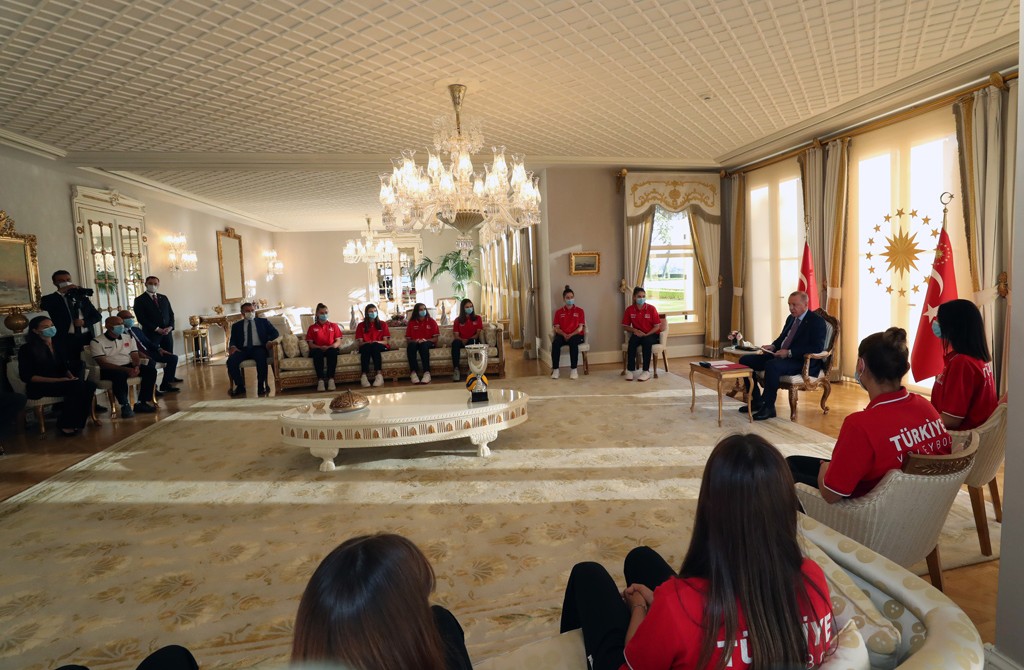 Turkish President Recep Tayyip Erdogan meets players of Turkish women’s under 19 volleyball team after they won CEV U19 Volleyball European Championship, in Istanbul, Turkey on September 05, 2020. Turkey beat Serbia 3-2 in the final to win the gold medal in the 27th edition of the competition. The final game took place in Bosnia and Herzegovina's city of Zenica.

The Erdoğan factor and fundamentalism

For Western capitals, a Turkey led by President Recep Tayyip Erdoğan is a problem they do not know how to manage. It has also been election campaign material for politicians since Brexit. You can be sure that the Erdoğan factor will persist in election campaigns in Germany in 2021 and in France in 2022.

For Western capitals, a Turkey led by President Recep Tayyip Erdoğan is a problem they do not know how to manage. It has also been election campaign material for politicians since Brexit. You can be sure that the Erdoğan factor will persist in election campaigns in Germany in 2021 and in France in 2022.

Moreover, the question of what to do with a Turkey led by Erdoğan is on the agenda of the United States presidential election campaign. In recent weeks, we have discussed the views of Democratic presidential candidate Joe Biden on “overthrowing Erdoğan.”

Likewise, we remember how President Donald Trump humiliated his opponent Biden, saying he is not smart and “only I can guide him” on the one hand, while praising Erdoğan on the other. We are used to the fact that the phrase “the Turkey problem” is frequently cited in Western media.

It is quite reasonable for Ankara to have determination to protect its national interests from being labeled as “aggressive, expansionist and the imperial dream.” They cannot make a decision, though: Is a Turkey led by Erdoğan a new Ottomanist or pan-Islamist nation seeking Pax-Turca?

However, the latest version of this heavy ideological campaign, under the name of analysis, is becoming increasingly prominent. It is based on the argument that “Turkey is more dangerous than Iran.” This thesis is argued by Yossi Kohen, the director of Israeli intelligence agency Mossad. Kohen considers Turkey, which is “on the rise,” to be the “main threat” rather than Iran, which he defines as “the declining power.”

Today, you can listen to this view in many anti-Turkey circles. Amr Moussa, the Egyptian secretary-general of the Arab League, gives the same argument, saying Turkey “is more dangerous to the Arab world than Iran,” while the Western capitals say “Turkey has caused NATO’s brain death and only power can stop it.”

The version uttered by David Ignatius in an article in The Washington Post on Sept. 3 is even more mind-boggling. Ignatius asks, “How strange that the Trump administration, which has been so adamant in opposing Iran, is facilitating the rise of another expansionist Islamic state seeking regional hegemony – namely, Turkey.” He accuses Erdoğan of “championing his own brand of Islamist fundamentalism.” He argues that both Iran and Turkey push to project military power, and they have “a backward-looking nostalgia for ancient glory, in the Ottoman and Persian empires. Both are exporting instability through proxy forces. And both delight in bashing the United States.”

The yarn spun by Ignatius is full of all-too-familiar accusations. The most mind-boggling part is that he claims that Turkey, like Iran, promotes a “radical version of Islam.”

Disregarding the conceptualizations of the literature of Islamism, this claim is neither aware of the sociology of Islamic groups nor of the strong secular life in Turkey. These figures consider that the United Arab Emirates (UAE), which has armed Madkhalist Salafists, is in a “moderate” position, while Turkey is “radical” as it has met with Hamas officials. Those who have produced al-Qaida and Daesh are “moderate,” while those who fight Daesh are “radical?” Mohammed Morsi, elected in democratic elections in Egypt, is branded “radical,” while pro-status quo Gulf states that overthrew Morsi in a coup are “moderate.”

Let me reiterate that Israel and its subcontractor, the UAE, are behind the argument that “Turkey is more dangerous than Iran.” There are also the Gulf states that have suffocated Arab uprisings in fear of democratic elections. Some Western circles are also using this argument for their own interests.

In recent years, Turkey represents an experience that has transformed the region around it. Turkey is boosting its power with its breakthroughs in diplomacy, defense and energy, and its military presence.

Turkey’s rise bothers Israel and the Gulf states as Ankara is now a leader who can participate in the greater power competition. You can add France and Greece to those who feel threatened. However, Iran is more ineffective and is a “useful other.”

For years, Israel has continued its expansionism by using the “Iranian threat.” Iran’s expansionism, in return, benefits from the “Israeli threat.” The Arabs are the worst sufferers of this process of mutual exploitation.

After all, some of the Arab administrations have collapsed, while others are in a rush to draw closer to Tel Aviv. So, the label “fundamentalism” that they seek to put on Erdoğan is a mask.

What lies behind this mask is the intention to overthrow, or at least restrain, a leader who struggles to protect his nation’s interests.

What does France want from Turkey?
Previous

Why carrot-and-stick approach does not work in East Med
Next
Loading...
Loading...
We use cookies to ensure that we give you the best experience on our website. If you continue to use this site we will assume that you are happy with it.Ok