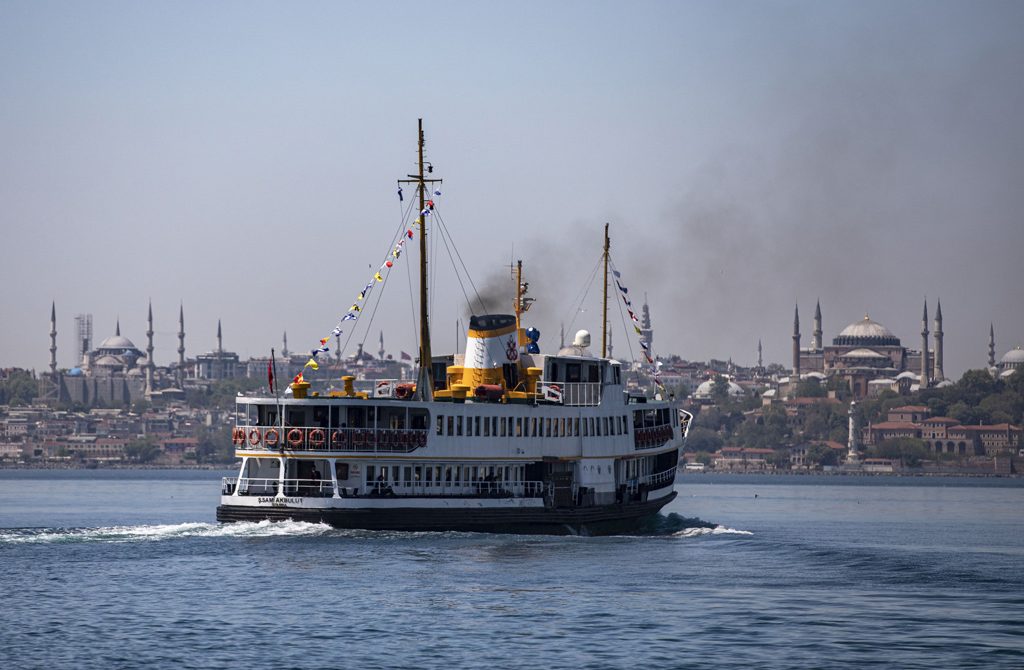 An iconic ferry cruises along with the historical Blue Mosque (L) and Hagia Sophia Grand Mosque (R) visible in the background, Istanbul, Turkey, May 13, 2021. (Photo by Getty Images)

On May 19, 2021, the European Parliament (EP) published its report on Turkey in which it recommended the suspension of Turkey's European Union accession negotiations.

On May 19, 2021, the European Parliament (EP) published its report on Turkey in which it recommended the suspension of Turkey’s European Union accession negotiations.

It argued that “Turkey has distanced itself increasingly from EU values and standards. As a result, relations have been brought to a historic low point.”

It is a one-sided assessment that blames the current Turkish government for all the setbacks and dysfunctional relations between Turkey and the EU.

We could add more to this list. There are also some criticisms concerning judicial procedures, minorities and freedom of the press.

Even if Turkey had a perfect record in the mentioned areas, there is no sign that the EU would engage Turkey fairly, and the EP would still write an unbalanced analysis.

An obstacle in ties

Like previous EP reports, the current report was a big disappointment for the people who deal with Turkish-EU relations in Turkey.

The report is quite bleak and frustrating, especially for the people who work tirelessly to improve Turkey’s relations with the EU and stimulate the membership perspectives.

Bureaucrats, academics, representatives of civil society organizations, the business community and the Turkey-EU relations supporters are unimpressed and critical of the current report.

The report also does not reflect the overall spirit of the positive agenda that was agreed upon by EU leaders. The proponents of EU membership and stronger Turkish-EU relations in Turkey are also weakened by some of the baseless allegations listed in the report.

The EP reports of the last several years predominantly reflect the views of Turkophobes in Europe and Turkey’s marginal groups and their views.

The EP reports turned into a platform for extreme-right political actors in Europe, anti-Turkish circles and Turkey’s marginal groups. It is fair to include critical voices and incorporate some constructive criticism, however, drafting a report based on those hostile views does not reflect good faith.

If the EP reports aim to deepen the rift between Turkey and the EU, the recent report can be considered successful.

In terms of a constructive direction, the EP reports are a big failure. Nacho Sanchez Amor, the new Turkey rapporteur of the EP, has a more constructive and fair approach to Turkey than his predecessor Kati Piri.

Piri missed no opportunity to include the PKK affiliated factions, FETÖ and other marginal opposition factions in Turkey and Europe. Unfortunately, those unfair and biased assessments damaged Turkish-EU relations.

Sanchez should work harder to incorporate more mainstream views in Turkey and Europe to draft a more fair review.

Over the last several years, due to the reports not considering the political reality and social and economic transformations in Turkey, nobody in Turkey has given the EP reports much serious consideration.

The EP should try to grasp Turkey’s social and political realities and engage with key stakeholders to develop solution-oriented reports.

Experts and bureaucrats read and evaluate the reports, but the only response from decision-makers comes from a very low level. There are just a few lines of criticism and condemnation from the Turkish government provided for the record.

At the public level, there is only indifference and silence. Opposition political actors occasionally resort to the arguments in the EP reports to put pressure on the Justice and Development Party (AK Party) government.

Yet even for the ardent critics of the government in Turkey, except for a few circles, the unfair assessments and unsubstantiated claims make the reports irrelevant.

If the EP actually wants to be more relevant and give a more constructive direction to Turkish-EU relations, they should pay attention to drafting more objective and fair assessments, including the mainstream circles’ perspectives.

If Turkish-EU relations do not move forward in the next couple of months, it is highly likely that they will move backward.

There is a lack of enthusiasm among the Turkish public for a return to the membership agenda. The EU institutions and high-level political actors in Europe should instead build this enthusiasm.

Who will stop Israel?
Previous

Francia restringe las libertades individuales y civiles de sus ciudadanos
Next
Loading...
Loading...
We use cookies to ensure that we give you the best experience on our website. If you continue to use this site we will assume that you are happy with it.Ok