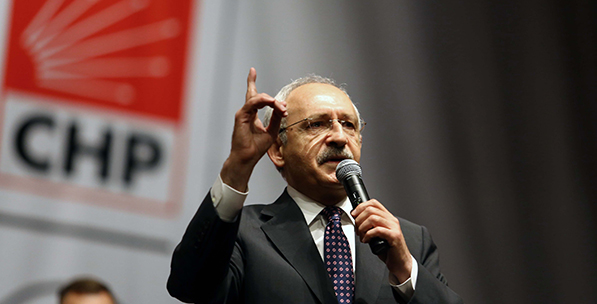 In harshly criticizing the foreign policy implemented by the ruling AK Party, the CHP assumes that Turkey can simply avoid problems around itself while pledging to bring peace to a competitive and chaotic region

The Justice and Development Party (AK Party) era has marked a period in Turkish history where domestic politics and foreign policy have been deeply intertwined. Differences over policy and discourse about the Syrian civil war and the military coup in Egypt, for instance, have been prominent features of the national conversation. Similarly, the ruling party responded to the opposition’s Gezi Park protests by mobilizing for the victims of Rabaa Square in Egypt.

During this period, the AK Party’s commitment to a visionary, active and multi-dimensional foreign policy essentially reflected its broader goal of transforming the country and represented a valuable instrument facilitating the process. Despite all these developments, where various political parties stand on foreign policy have not received a lot of attention from the public ahead of the June 7 elections. Instead, people remain focused on the recently announced absurd economic proposals that the Republican People’s Party (CHP) and Peoples’ Democratic Party (HDP). Over the coming weeks there will presumably be some debate over identity politics as well.The AK Party’s election manifesto builds on a combination of facts and values as well as principles and interests in the area of foreign policy necessary to build a new Turkey. The party thus pledges to not only remain committed to its position, but also take additional steps toward the same goals. Meanwhile, the CHP, which believes the ruling party’s policies to be sectarian, ideological and adventurous, has reinvented the traditional principle of peace at home, peace in the world.

At the same time, the main opposition party’s election manifesto adopts a reactionary language by simultaneously accusing the government of fostering an authoritarian domestic environment and suggesting that the ruling party adopts a sectarian and interventionist foreign policy. As such, the AK Party’s foreign policy is associated with isolation from the world and becoming Middle Eastern. At the same time, the party seeks to formulate a new foreign policy perspective akin to the AK Party government. The CHP’s citizen-centric, value-based, pluralist, pro-peace, open and consistent policies will transform Turkey into a hub for regional peace, development and democracy. Interestingly enough, the above statement leads to the conclusion that the country ought to serve as a model for the Middle East on the basis of secularism, which clearly reflects an effort to respond to the AK Party’s audacious foreign policy agenda. In this sense, the main opposition’s election manifesto, while emphasizing social democratic values, justice, pluralism and cooperation, fails to go beyond reactionary politics. After all, the CHP essentially calls on the people to honorably abandon Turkey’s active foreign policy.

There are at least two contradictions here. First and foremost, the main opposition party assumes that Turkey can simply avoid problems around itself while pledging to bring peace to a competitive and chaotic region. The problem with this assumption stems from the party’s failure to correctly analyze regional politics. After all, it takes more than an undisputable pledge to cooperate with the international community on security issues to govern.

Today, proxy wars between regional powers including Iran and Saudi Arabia remain far from over. Meanwhile, the United States has adopted a new policy of empire under the administration of President Barack Obama, which allows regional and local forces to clash with one another. Meanwhile, this approach gives Washington the flexibility to shake hands with Iran on nuclear energy while supporting Saudi-led airstrikes in Yemen. As such, it takes more than simply ignoring the dynamic and multi-dimensional power struggle in the Middle East to address existing problems. Secondly, abandoning Turkey’s active foreign policy in the Middle East will put strains on regional alliances and engagements. Obviously, the country’s current policy is open to revisions, but to pretend that Turkey could t

Turkey's Syrian Refugees
Next
Loading...
Loading...
We use cookies to ensure that we give you the best experience on our website. If you continue to use this site we will assume that you are happy with it.Ok