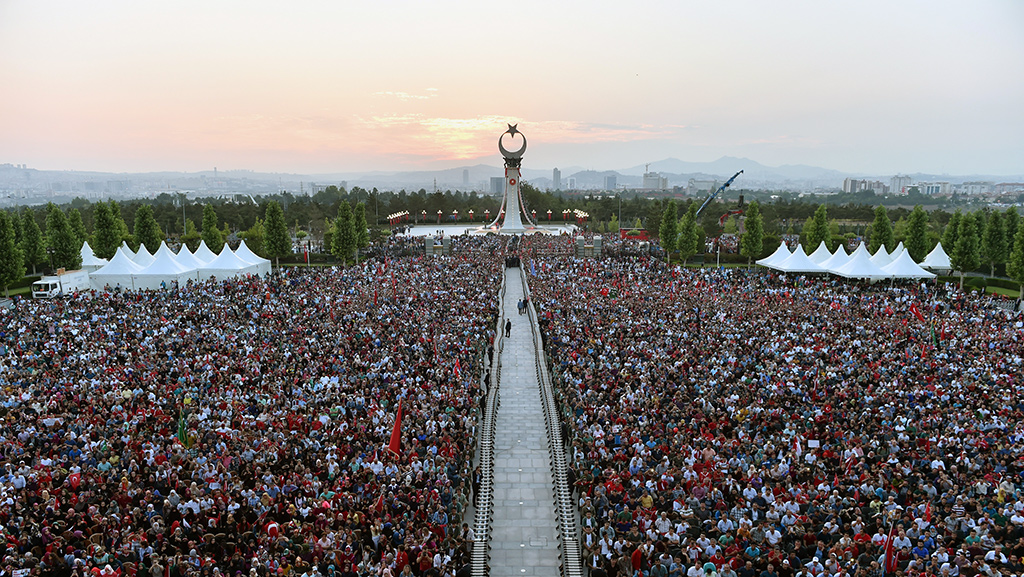 The most recent developments in Turkey indicate that the country is a battleground betweenWesternism and native/national politics.

The most recent developments in Turkey indicate that the country is a battleground betweenWesternism and native/national politics. This power struggle became crystal clear during the coup attempt on July 15, 2016. Earlier this year, representatives of the latter movement forced the People’s Alliance to make it clear that they weren’t going anywhere.

The Westernists, in turn, have been unable to unite because they have been crippled by a fear of losing and ideological contradictions.Today, the opposition is divided into four pieces: The Republican People’s Party (CHP), the Peoples’ Democratic Party (HDP), the Good Party (İP) and the Felicity Party (SP). They are united by one thing: Their hostility toward President Recep Tayyip Erdoğan. Those parties have absolutely nothing else in common. Anti-Erdoğanism is so important to them, however, that they have been taking similar steps on key issues in Turkish politics. Against native/national politics, they promote Westernism.

To be clear, their talking points are no different from the various arguments made by the Western media against Turkey. They are opposed to Turkey’s efforts to become more influential and afraid of the birth of a greater country. Their weakness, in turn, is that they sided with the West, rather than Turkey, in a series of attacks against the country – including the Gezi Park revolts, attacks by the Gülenist Terror Group (FETÖ) and the PKK, and the July 15 coup attempt. In the failed coup’s aftermath, they criticized Turkey’s efforts to identify and dismiss from public service undercover operatives of designated terrorist organizations with reference to democracy.

The state of emergency, which had no negative side effects on the general population and instead promoted a sense of security in Turkey, they said, was an attack on democracy.Nowadays, the four parts of the opposition are trying to come together and find a mutually acceptable presidential candidate to challenge President Erdoğan. The single most important question to them is when this joint campaign ought to start. They will either agree on a candidate ahead of the election or support their own candidates in the first round, hoping that there will be a second round. If no candidate can win the majority of the vote in the first round, they will jointly support Erdoğan’s opponent.

If the election were to take place in 2019, the opposition would have had plenty of time to decide which road to take. For a whole year, they were going to try to pull Turkey down, fuel chaos on the streets, create economic problems and promote their candidate. There would have been enough time to persuade the various potential parts of the alliance. Their fear of losing would be addressed and their ideological contradictions would be swept under the rug.But the election will take place a year earlier than planned – which caught the opposition by surprise. Now, they are desperately trying to form a coalition against the People’s Alliance. My sense is that rallying behind Erdoğan’s opponent in the second round started making less sense to all parties under the circumstances. Instead, they attempted to find a candidate to challenge the incumbent. In recent days, we have seen plenty of give-and-take, transfers and gossip. No doubt, there will be much more of this in the following weeks. After all, this isn’t an organic movement that seeks to come to power through a genuinely democratic process. They resort to a number of shady tactics instead.

The transfer of 15 CHP parliamentarians to Meral Akşener’s İP was a case in point. Meanwhile, the SP is trying to lure away some parliamentarians from the ruling Justice and Development (AK Party). Such efforts are obviously futile, but they seem incapable of anything else. My understanding is that all of those steps are related to a broader effort to nominate Abdullah Gül as the opposition’s joint candidate. Indeed, we are hearing that Gül is convinced. But it remains unclear whether the CHP, the HDP and the İP will get on board.We will find out many things in due time. But an important upside of the current process is that many pretenders have already been exposed. Regardless of the tactics that the anti-Erdoğan front will use ahead of the election, it is clear that the People’s Alliance cannot afford to take things easy on the campaign trail. Taking things easy, dare I say, is our most dangerous enemy.

Abdullah Gül's miscalculation
Next
Loading...
Loading...
We use cookies to ensure that we give you the best experience on our website. If you continue to use this site we will assume that you are happy with it.Ok