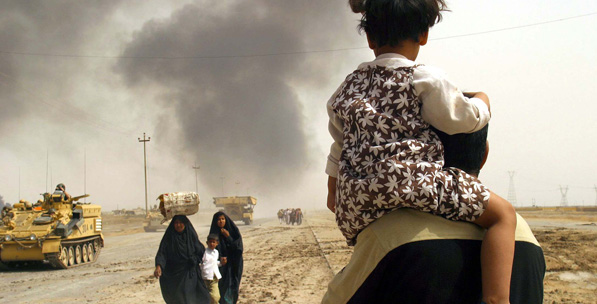 The 21st Century Pain and the Middle East

One of the most severe pains of the 21st century will be the dissolution of the status quo in the Middle East which presented a luxurious world of geopolitics to the West and to those who kept guard of the regional order on behalf of the West throughout the 20th century.

The last decade of the last century had become the most important “crown period” for the West or the North, especially both in political and economical terms. They were put on record as the most colorful years of the global capitalism. Why should not they? For the North, the liberal democracy had almost announced its global victory in political terms, the Cold War was finally ended, the broadest military coalition was successfully tested during the occupation of Iraq in the post World War I period, the global financial system was set up, the regional economic alliances were set up and a communication revolution was experienced once again as “the end of the history” was announced for the non-West in the 1990s.

The eco-system of the North entering the new millennium in the first flush of the aforementioned victory was to witness that some of the quite colorful scenes of the 1990s were only the eye-catching colors of fall. Starting with the 9 /11, the first disorderly intervention shook the global security status quo. In the same years, ups and downs in energy prices disturbed political and economic balances that had been sitting on the global imbalance for years. The economic and political diseases of the 1990s started to occur simultaneously. The financial crisis breaking out in the North rapidly headed to a global economic crisis.

Global organizations were the most tangible harbinger of the on-going crisis. The deepening political and economic loop holes in the global system had already started to cause concerns. The United Nations (UN) politically; the International Monetary Fund (IMF) and the World Trade Organization (WTO) economically, and the NATO as the security organization were facing crisis in their ability to be involved in the issues as well as in their own methods. The deep crisis, which was felt in the UN decision-making hierarchy in the 1990s and became evident in the aftermath of the 9/11, cleared the way for the questioning of the UN’s existence. The recovery signals coming from the non-West societies have begun to be reflected as government and administrative crises accompanied with strong objections to the global organizations designed by the North for years, although these crises were not at the level of structural breakage. Towards the end of the first decade of the millennium, the economic crisis surprisingly affected the North’s eco-system beyond anticipations. Today, the pains of this crisis – baring the potential of serious breakages – have multiplier effects rendering the global system completely meaningless.

Severe reverberations of the North-origin economic crisis had heavy political costs. The political fault lines in the Middle East broke after Iraq’s occupation by means of the exploitation of the global security’s architecture which was built following the World War II and paralyzed today. In a period where the global capital system suffers from and is pre-occupied by the preliminary pains of the 21st century, “the broken fault lines” have not delayed to transform the negative accumulations of the 20th century Middle East into the Arab Uprisings.”

It could not be said that the West, and the US in particular, have shown an enunciable reaction to the emerging picture. One of the most severe pains of the 21st century will be the dissolution of the status quo in the Middle East which presented a luxurious world of geopolitics to the West and to those who watched the regional order on behalf of the West throughout the 20th century.

The US and the West have faced a newly emerging “threat” with the occupation of first Afghanistan and then Iraq. To a great extent, this new threat which had reflections in the geopolitical understanding of the entireMiddle Eastand the Islamic World was nothing but the Sunni Islam’s strength of resistance. The Iran-centered conditioned worlds of threat for years had been turned upside down. They preferred to continue double-headedly to make th

Coups in Turkey and Egypt
Previous

5 Questions: Yet Another Massacre in Egypt
Next
Loading...
Loading...
We use cookies to ensure that we give you the best experience on our website. If you continue to use this site we will assume that you are happy with it.Ok