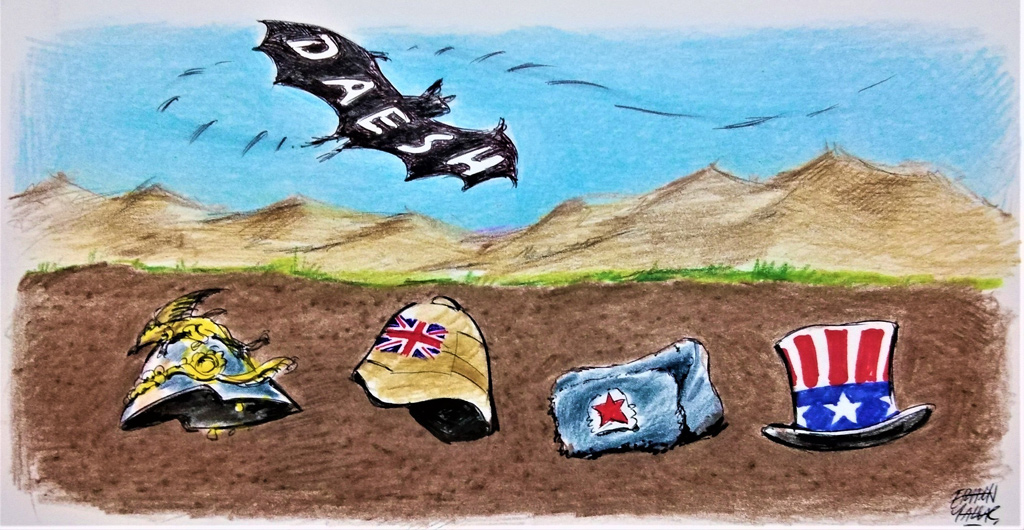 An illustration by Erhan Yalvaç

Taliban’s Ankara visit and the Daesh threat in Afghanistan

In Afghanistan, Turkey's sole agenda is to help constructive and moderate efforts to establish peace and stability

A delegation from Afghanistan’s interim Taliban government, led by acting Foreign Minister Amir Khan Muttaqi, visited Turkey’s capital, Ankara, last week. Foreign Minister Mevlüt Çavuşoğlu reminded the Taliban, who seek international recognition, humanitarian aid and foreign investment, of the importance of forming an inclusive government and ensuring that girls attend school. Having received those recommendations, the delegation returned to Afghanistan, only to be shocked by a Daesh perpetrated suicide attack against a mosque with a predominantly Shiite congregation in Kandahar. Some 47 Afghan worshippers lost their lives as a result of that attack. On the previous Friday, another Daesh suicide bomber had killed at least 100 people at a predominantly Shiite mosque in Kunduz.

The spike in Daesh terrorist attacks must ring alarm bells all over the world – with an eye on Afghanistan’s future. That group, which fuels ethnic and sectarian conflict, represents the single greatest problem in Afghanistan and its neighborhood.

The whole world wonders how the Taliban intend to rule Afghanistan, yet the country faces a very grim future. Despite accumulating significant experience between 1996 and 2001, the movement finds it difficult to rebuild the bureaucracy, run public institutions and manage the nation’s economic life. Moreover, the exodus of human and financial capital has dragged Afghanistan’s already weak economy into a full-blown crisis. The Afghan people, who supported the Taliban over rampant corruption under the governments of former presidents Hamid Karzai and Ashraf Ghani, expect the movement to govern effectively.

Yet the sense of victory, rooted in the United States’ defeat, may give way to crises of government and ethnically motivated revolts. Furthermore, the continued presence of terrorist organizations, starting with Daesh, in Afghanistan place at risk domestic stability as well as the Central Asian republics, China and the rest of the world. As winter approaches, millions of Afghans could experience hunger and poverty – which, by extension, means worsening humanitarian suffering and migration.

Afghanistan could end up in a vicious cycle of poverty, terrorism and civil war, if the international community does not make up its mind about its future engagement with the Taliban soon. That the movement consists largely of Pashtuns makes other ethnic groups unhappy. The contradictions become much more obvious if one were to throw in the radical views of Daesh – which considers even the Taliban un-Islamic – and acts of terrorism by that group into the mix.

Is the group moderate?

One way or another, the Taliban have to ensure the effectiveness of Afghanistan’s public administration and to form an inclusive government. The movement also needs to convince the world that it has become more moderate – whilst subscribing to a rigid interpretation of Sharia law. After all, Daesh could make the Taliban pay a significant price with its radical words and deeds. Indeed, the question is no longer whether the Taliban’s victory stands to encourage political conservatives elsewhere. Devoid of stability, Afghanistan could export terrorism to its vicinity, and subsequently, the rest of the world. For the record, that would be due to Afghanistan’s inability to fight terrorist entities – rather than the government’s policy. I do not want to even think about which terrorist group will end up controlling billions of dollars worth of military equipment that the U.S. left in Afghanistan. Needless to say, the Islamophobic discourse, which associates Islam and Muslims with violence, will become much more prominent against that backdrop.

The single greatest threat for Afghanistan, which is dominated by rigid traditionalism, is the political and economic devastation that Daesh and similar groups attempt to cause. The international community should engage with the Taliban and ask them to promote stability and undergo a partial transformation. At the same time, Afghanistan’s struggle against Daesh and similar organizations must be adequately assisted.

Those considerations shape Turkey’s policy toward the Taliban. In other words, the Taliban delegation’s visit does not mean that Ankara officially recognizes the movement. Instead, the Turkish government wants to engage with the Taliban to help restore Afghanistan’s stability. As such, the Kabul Hamid Karzai International Airport’s administration, humanitarian assistance, economic investments, migration and security issues were on the agenda during last week’s meeting. It is important for the Taliban to prioritize Turkey, along with Qatar, as it opens itself up to the world.

At the same time, the international community needs to contribute to Ankara’s efforts to lead the way regarding Afghanistan. President Recep Tayyip Erdoğan’s call on the G-20 to establish a working group on Afghanistan, together with Turkey’s candidacy for that group’s presidency, needs to be endorsed.

US focus on Pacific calls for reassessment in Turkey ties
Previous

Turkish foreign policy's principles towards Africa
Next
Loading...
Loading...
We use cookies to ensure that we give you the best experience on our website. If you continue to use this site we will assume that you are happy with it.Ok