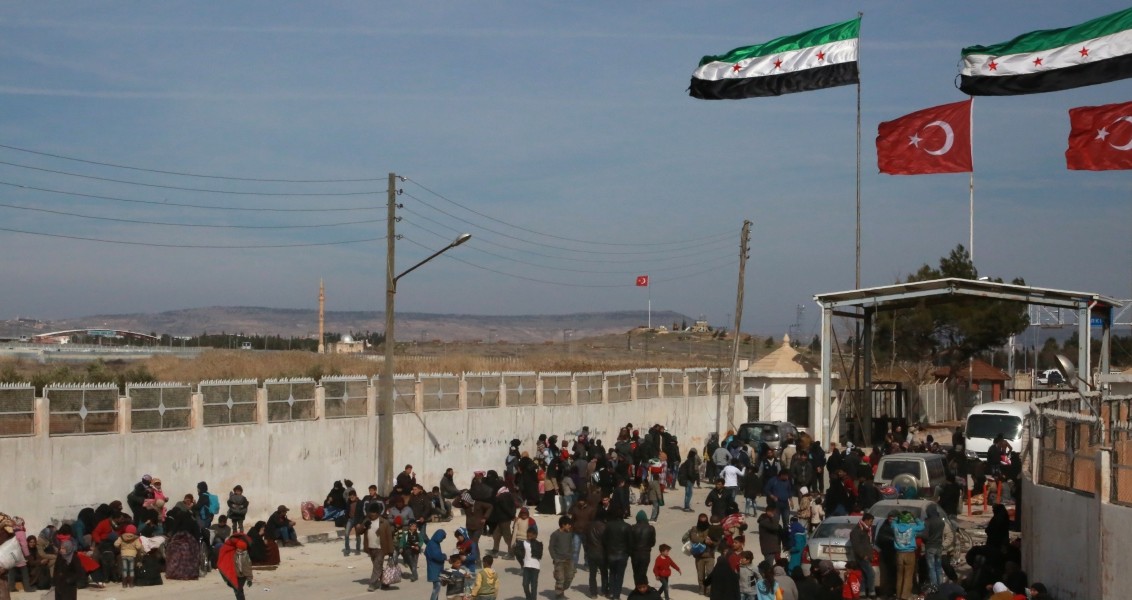 Syrians fleeing the northern embattled city of Aleppo wait at the Bab al-Salama crossing on the border between Syria and Turkey, on February 5, 2016. Nearly 40,000 Syrian civilians have fled a regime offensive near Aleppo, a monitor said, as Turkey warned it was bracing for a wave of tens of thousands of refugees. / AFP / STRINGER

The strong criticism of Ankara's Syria policy is unfair when Turkey is the only country using military power in northern Syria solely to secure its national rights and borders.

At a time when the Turkish government holds the People’s Protection Units (YPG) accountable for the Ankara suicide attack and explains to the United States that their allies in northern Syria are really members of the PKK, a globally recognized terrorist organization, 200 academics and journalists issued a statement blaming the Syrian civil war on the government. The text closely resembles a controversial statement by certain academics claiming the state was “massacring the people.” This time around, the group drew parallels between Turkey’s shelling of YPG positions in northern Syria and counterterrorism operations in southeastern Turkey to criticize the government’s Syria policy.

There is no shortage of anti-war campaigns in democratic societies. Claiming that fighting terrorism and neutralizing national security threats reflect an effort by the government to fight a war, however, amounts to a conspiracy theory. The radical opposition obviously has the luxury of making ideologically-charged statements that present no meaningful alternatives to the current policy.

At the same time, the statement supports the view that some of Turkey’s academics and journalists are extremely naive. Accusing the government of war-mongering, to be clear, is not any more realistic than to claim that the Syrian crisis could end if Turkey were to make peace with Syrian leader Bashar Assad’s regime and strike a deal with the PKK leadership.

Make no mistake: There is no easy way out of the Syrian quagmire – even unconditional surrender won’t make problems go away. One could blame the PKK/(Democratic Union Party (PYD) attacks against Turkey on the Justice and Development Party’s (AK Party) greed, but conspiracy theories won’t help the country address long-term security challenges.At this point, the main problem with the radical opposition’s criticism of the government’s Syria policy is that they are unable to distinguish between real threats linked to the civil war next door and reflecting on the government’s performance. The prospect of removing the AK Party from power excites them so much that they find themselves unable to talk about feasible policy options. Turning a blind eye to the real world, the radicals often choose to silence the moderates by accusing everybody else of treason.

Here’s a great example of how the Republican People’s Party (CHP) changed their position on the Syrian civil war: Chairman Kemal Kılıçdaroğlu, who until recently opposed the creation of a safe zone in northern Syria, publicly supported a 10-kilometer-wide stretch. When his predecessor, Deniz Baykal, warned against the fall of Aleppo and endorsed Turkey’s shelling of YPG positions, however, his own party turned against him. Over the next days, Baykal said it was necessary to draw the line between criticizing the government and defending Turkey’s national interests.

Since 2011, Turkey faced major Syria-related challenges including a refugee crisis, terror attacks and the rise of the PKK-PYD. During this period, the government – which the opposition accuses of gambling away Turkey’s future – was careful not to resort to hard power instruments. At a time when Iranian and Russian soldiers die in Syria, Turkey still tries to avoid a military confrontation. Although the PKK-PYD and DAESH have been expanding their territory, the government refused to deploy troops to northern Syria – not even to create a safe zone for refugees.

At this point, though, Turkey’s Syria policy faces serious challenges. The emphasis of the United States, Iran and Russia on hard power places Turkish interests at risk and the Syrian civil war has contributed to the country’s problems since the Gezi Park protests in May 2013.

It would be unfair to criticize Turkey’s Syria policy in retrospect, especially because the situation in Syria will further escalate in coming months. All groups must be careful not to jeopardize Turkey’s position at the negotiating table by engaging in blood feuds at home.

PKK Proxies or Operatives behind Ankara Explosion
Next
Loading...
Loading...
We use cookies to ensure that we give you the best experience on our website. If you continue to use this site we will assume that you are happy with it.Ok