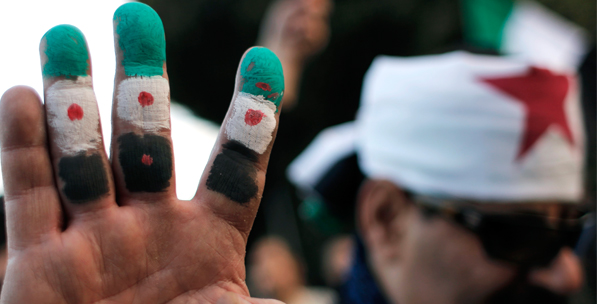 Syria in the Middle of Violence

SETA presents the analyses of SETA experts on Syria in order to better understand Syrian civil war which cost more than 100 thousand lives, injured more than 2 million people and displaced many others.

The Arab Spring, which broke out on December 18, 2010 in Tunisia, soon influenced almost all of the countries in the region and spread to Syria on March 15, 2011.

Assad regime violently suppressed protests of a few students demanding “democracy and freedom” in Daraa thus lighting the fuse for the civil war.

Over the last two and a half years, the bloody civil war, which cost more than 100 thousand lives, injured more than 2 million people and displaced many others, has resulted in numerous mass killings by the regime.

The latest one was the chemical weapons attack by the government forces in Eastern Ghouta on August 21, 2013. According to the initial findings, more than 1,300 civilians including women and children have been killed in the attack.

SETA presents the analyses of SETA experts on Syria in order to better understand the Syrian civil war.

The study addresses the League’s policy proposals, decisions, and reactions regarding the Syrian crisis and con¬centrates on what these all policy measures mean for the League as a regional organization.

This is a complex conflict; it is not simply black and white. In order to fully understand what is happening in Syria, every aspect of the conflict must be considered including the actors both inside and outside the state.

As so many outside powers have clashing geopolitical, security, and economic interests, what does the road ahead look like for Syria?

The round table underlined the significance of Russia and Iran in the Syrian crisis, while highlighting the inefficiency of regional and international organizations.

The US in Between of Obligations and Concerns
Ufuk Ulutaş, September 09, 2013

A combination of obligations and concerns will determine the scope of the possible intervention in Syria.

The Intervention in Syria: The Fear of Western Hegemony<

Nobody Wins in Egypt
Previous

Assad-Sisi Massacres
Next
Loading...
Loading...
We use cookies to ensure that we give you the best experience on our website. If you continue to use this site we will assume that you are happy with it.Ok