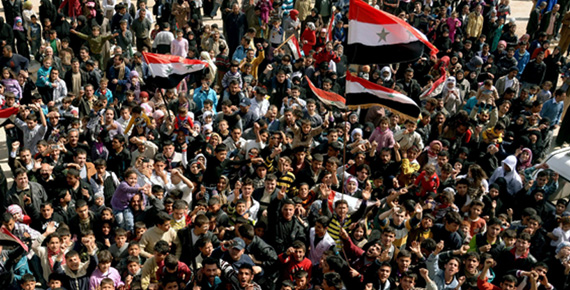 Syria in between ideological politics and reel politik

The Arab Gulf countries have caused the prolongation of the Baath regimes life by not providing strong support to the Syrian opposition and by instigating segregations.

As Hasan Nasrallah, the leader of Hezbollah in Lebanon, was delivering a speech last week in which he gave overt support to the Baath regime in Syria, most countries in the Arab world – with the exceptions of Algeria and the Baghdad administration – although they have rhetorically stood by the Syrian revolution from the beginning, abstained from giving the Syrian people adequate support to cut the chase. It is not that no aid is provided, but the amount does not exceed a critical level, so the aids are insufficient to end the conflict yet sufficient to cause extension of clashes.

If we set Turkey and Qatar aside, the power struggle over Syria has two main camps: Iran and its regional extension Hezbollah against the Gulf bloc led by Saudi Arabia. As one camp wishes to keep the Baath regime alive, the other’s politics in Syria is to topple the regime. The question comes as “Is the main source of the power struggle over Syria ideological politics or is it the calculations of real politics? When the issue is the struggle between Iran and the Gulf, borders are easily unconsidered, the dichotomy here becomes the determining factor of the two camps’ performances in Syria.

Apart from the source of motivation and performance, conscientiously the ultimate purposes of these two camps over Syria are totally different from each other. The efforts of Iran to carry the Baath regime through at the cost of the lives of ten thousands in Syria and the efforts of the Gulf to stand against the Baath regime point to a clear conscientious difference. However, to discuss the source of motivation, which decides performance, becomes meaningful at this point. In other words, what is questioned here is not the ultimate purpose but what have the two camps done or not done to reach that final point.

It’s a common belief that the hostility between the Shiite and the Salafi governs the Iran-The Gulf struggle, but this is an easy-way-out explanation. Ideological politics takes achieving the goal to the center. It is, however, a style of motivation that might move away from efficiency while determining a path to reach the goal. Real politics, on the other hand, requires determining a position and follows clear paths to the goal.

Iran’s policy in Syria has minor ideological tones yet crystal-clear real politics, though it originates from misanalyses. Aside from the question that whether or not Iran’s theological core accepts the Syrian regime as Shiite, Iran has no intention to leave Syria alone, for it sees Syria as a gateway to the Levant politics via Hezbollah and as a buffer zone for the Iranian camp; besides it has meaningful relations with Syria. To Iran, its presence in Syria depends on the existence of the Baath regime; therefore, it uses all military and political sources to maintain the status quo. If the goal is to keep the Baath in Syria alive, the methods Iran applies are based on clear, continuous and direct assistance as seen in the Iranian performance in Syria so far.

On the other hand, the Gulf experiences instability on the subject of support and methods though it holds the right position for the ultimate goal. The underlying reason for the instability is the imbalance between ideological politics and real politics. In other words, the Gulf cannot give an answer to why the Baath regime should be toppled – in terms of real politics and without relating the issue with Iran. For this reason, the Gulf picks opponents however it pleases, both inside and outside; stands against the Islamic groups if it has an urge to do so; plays on differences among the opponents; and fails to transform its astronomical economic power into a game-changer instrument when the Syrian opponents need it the most. In short, by setting aside the real dangers resulting from the conflict’s being extended for long; the Gulf encourages the differences in the Syrian opposition instead

Turkey in 2012: Law and Human Rights
Next
Loading...
Loading...
We use cookies to ensure that we give you the best experience on our website. If you continue to use this site we will assume that you are happy with it.Ok