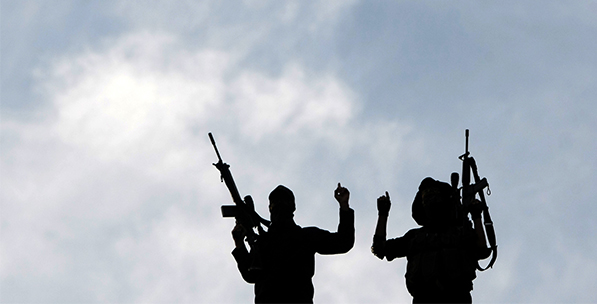 Strategic Patience and the Insanity of ‘Lone Wolves’

Adopting a foreign policy with reference to strategic patience, Washingtons current stance against ongoing conflicts continues to create new problems for the region as well as at the global level

Last week, the White House unveiled its 2015 National Security Strategy – which forms the basis of the Obama administration’s foreign policy and national security perspective with reference to “strategic patience” and “smart national security strategy.” The introduction of the two concepts, in a way, represents an indirect response of an administration not too eager to repeat the mistakes of Iraq and Afghanistan to mounting criticism against its Syria policy.

It is no secret that Washington’s current stance fundamentally reflects the view that the world came to expect too much from the United States with regard to areas of conflict and that this trend led to a costly policy of expansionism. As such, the current approach proposes that the United States knows its limits and focuses on domestic security while calling upon other actors to assume greater responsibility in the international arena – which is exactly why the Obama administration has thus far been unable to devise an effective strategy to address the Assad regime’s atrocities. Quite the contrary, the National Security Strategy sings praises of a weak U.S. strategy, citing concerns over getting stuck in yet another Middle Eastern country and the ways in which the post-Assad era could play out. Washington, furthermore, is keen on sub-contracting the struggle against ISIS, a key national security threat, to local forces with the ability to launch land attacks against militants.

As a matter of fact, President Obama recently asked the Congress to formally authorize the use of military force against ISIS targets. Despite maintaining that a comprehensive and long-term strategy has been developed to defeat the militants, the administration notably refrained from requesting authorization to put U.S. troops on the ground. Instead, the draft resolution, if adopted, will allow the Obama administration to launch military operations to assist local forces fighting the actual war against ISIS. Both the new National Security Strategy and the draft resolution, briefly put, indicate that the Obama administration has already given up on the Assad regime’s removal from power. Instead, Washington now seems preoccupied with so-called long-term policies to tackle the by-products of the prolonged civil war in Syria.

Mr. Obama’s “strategic patience,” however, continues to create new troubles for the region and at the global level. First and foremost, as Kılıç Buğra Kanat pointed out in a recent article for Daily Sabah, smart power does not exclusively refer to the use of diplomatic tools but also involves military force and the effective use of deterrence. Washington is not compelled to choose between the irresponsible unilateralism of George W. Bush and President Obama’s “strategic patience” – which is just a nice way of saying total inaction. Instead, Kanat proposes a third way: A range of “smart” options combining diplomatic efforts and military force. The solution to the ongoing crisis in Syria might require diplomatic initiatives equipped with military deterrence. This is not to suggest that the U.S. should again serve as the world’s policeman. Instead, Washington needs to approach the implications of its irresponsible interventions more carefully. After all, the world is already faced with troubles once deemed predictable.

The second problem stemming from Mr. Obama’s strategic patience relates to regional powers waging proxy wars in the void of U.S. power. This phenomenon might primarily have to do with pressures, competition and power struggle among Muslims, but suggesting that “the U.S. could not possibly get involved in a conflict between Muslims” cannot relieve the West of its responsibilities toward mankind – instead, this move could potentially alienate those who recall the sins of previous generations and encourage “lone wolves,” operatives of ISIS and al-Qaida among others, to challenge the global security regime. (None would dare claim that additional security measures can prevent future attacks akin to the Cha

The Media-Terror Connection
Next
Loading...
Loading...
We use cookies to ensure that we give you the best experience on our website. If you continue to use this site we will assume that you are happy with it.Ok