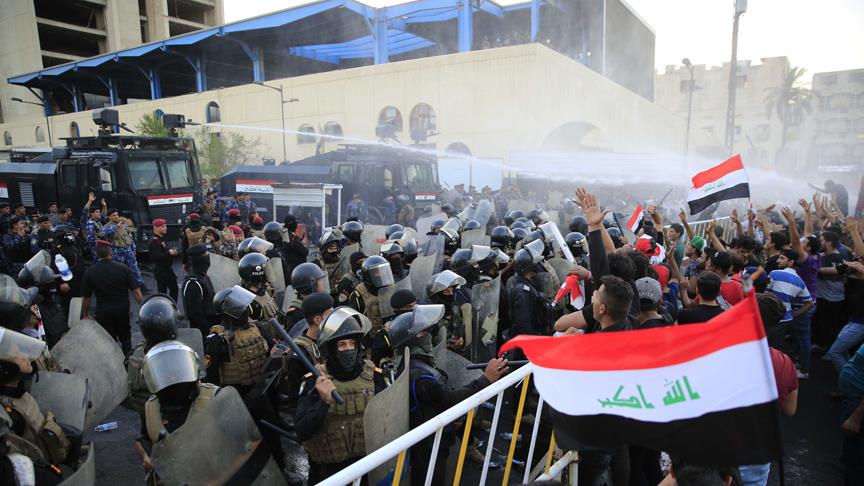 Social unrest may turn to political turmoil in Iraq

The Iraqi government must behave responsibly and take non-violent measures to overcome its ongoing problems; otherwise, the current protests may lead to political turmoil soon

Several weeks ago large groups of the Iraqi people began to protest government mismanagement, high unemployment, poor public services and chronic power shortages. Demonstrations started in the southern city of Basra, and later spread to other parts of the country, including the capital, Baghdad. The government tried to take some concrete measures such as cutting internet access and banned some social media platforms in order to prevent the escalation of the protests. However, the use of disproportionate force by the security forces caused further tension. So far, more than a dozen demonstrators have been killed and hundreds of them wounded. Many protesters were arrested by the security forces.

The main motive of the demonstrations is the people’s dissatisfaction with public services. People of the south especially have faced many social and economic problems due to corruption, unemployment, poor services, a severe drought, lack of water, lack of electricity and forced migration. Protesters criticize almost all political actors active in the country, including the incumbent government and opposition parties. The Iraqi government failed to respond to the need of its people. If the government does not solve the problem, demonstrations may spread and turn into political protests targeting the political authority.There are some factors contributing to the social unrest. First, the long-time struggle against terrorism caused a heavy economic burden, which the government is unable to carry. Furthermore, the low oil prices deepened economic hardships of the Iraqi state, a state that is dependent on the oil market. On the one hand, the government faces difficulties in the reconstruction of the country; on the other hand international actors are reluctant to contribute to the rebuilding of Iraq.

In the early days of this year, an international conference was held in Kuwait to raise money for rebuilding Iraq. While, it is estimated that approximately $90 billion are needed for the reconstruction, international actors pledged only about $30 billion. Second, the enduring political crisis contributes to economic and social problems. The solution of structural problems requires the formation of a strong government. However, the result of the most recent elections forced the political parties to form a coalition government. And it seems that even the formation of a fragile coalition government will take time. Muqtada al-Sadr, who was behind many popular protests for the last two years, came first in the elections, and he is expected to form a coalition government that will prioritize the solution of the problems of the poor classes. Political life in Iraq is too fragmented. While the Shiite constitute the majority of the Iraqi people, Kurds, Sunni Arabs and Turkmens constitute a significant portion of the population. Political parties have to restore the demolished atmosphere of peaceful coexistence.

Third, regional and global powers interfere in the domestic affairs of Iraq. The Iraqi people hold all regional and global powers responsible for the ongoing problems in the country. While the most targeted state is Iran, other states are also blamed. Iran is the most dominant actor in Iraqi politics. Through religious, sectarian, economic, fiscal and military investments, Iran has been influencing Iraqi politics since the invasion of the country by the United States and the overthrow of Saddam Hussein. People claim that their government is not independent enough to take the necessary measures to solve the problems. Therefore, they accuse Iran first, then the U.S. for government mismanagement. Protesters, most of whom are Shiite, chant slogans asking for the withdrawal of Iran from Iraq.

The protests are mainly for social and economic reasons. The protesters, who are mostly Shiite, rise against the Shiite political actors. The protests are leaderless. However, if not managed well, it may turn into political turmoil. Therefore, the government must behave responsibly and take non-violent measures to overcome these problems. The angry Iraqi people demand good governance and economic well being. They ask the government to spend the petrodollars for the benefit of the poor people. Regional and global actors should support the government to meet the demands of the people in order to prevent the eruption of possible turmoil in Iraq.

Why Meral Akşener's Good Party failed in politics
Next
Loading...
Loading...
We use cookies to ensure that we give you the best experience on our website. If you continue to use this site we will assume that you are happy with it.Ok