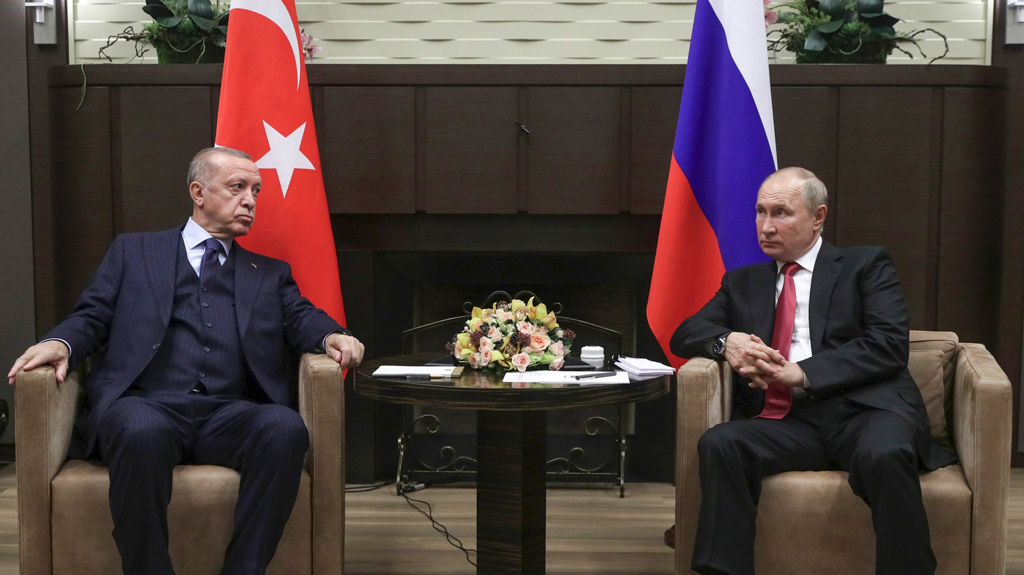 It is time to look at Turkey-Russia relations from the perspective of an 'early response to great power competition' rather than the classical balance-of-power approach.

President Recep Tayyip Erdoğan’s visit to Sochi, immediately after returning from the United Nations General Assembly (UNGA) drew widespread attention. The trip became more interesting due to a series of Russian airstrikes in Idlib and Turkish-controlled “safe zones” in northern Syria. Moreover, the president expressed his disappointment to reporters on his way back from New York that leader-to-leader diplomacy with United States President Joe Biden did not occur on the sidelines of the U.N. meeting.

Indeed, Erdoğan voiced that complaint by bringing up his relationships with Biden’s predecessors, as well as Russian President Vladimir Putin and German Chancellor Angela Merkel. He also described the current state of affairs between the United States and Turkey, key NATO allies, as “unhealthy” and “a bad omen” – calling on Washington to retreat from Syria and Iraq.

Finally, there were media reports saying that Biden and Erdoğan were due to meet in Rome – which observers viewed as a quick and positive response from the United States. In light of those developments, Erdoğan’s face-to-face meeting with Putin came to be seen as an attempt by Ankara to “strike a balance” between Moscow and Washington.

The West, Turkey and Russia

Obviously, the Western alliance (and, in particular, the United States) plays an important role in Turkey’s relations with Russia. That the West abandoned Turkey in the Syrian civil war’s wake and refused to sell Patriot missiles to Ankara, too, made a serious impact. Again, it is probable that Putin sold the S-400 air defense system to the Turks to fuel tensions within NATO and sell weapons to new markets. It is wrong, however, to reduce the current state of Turkey-Russia relations to taking advantage of an attempt to strike a balance or, as The New York Times wrote, “threatening the United States by cozying up to Mr. Putin but creating distance when … seeking something from Washington.” The broad scope of Erdoğan’s meeting with Putin (i.e. Syria, Idlib, PKK-YPG, Manbij, Afghanistan, Libya, the Zangezur corridor, the six-nation Caucasus platform, the S-400s, jet engines, space cooperation, natural gas, nuclear reactors, trade and tourism) suggests that there are secondary and tertiary considerations in addition to the balance of power.

Competition to fill the regional power vacuum, created by the U.S. withdrawal or repositioning, represents the second dimension of the Turkish-Russian relationship. It is no secret that Turkey and Russia occasionally end up on opposite sides in that competition. The Russians are unhappy with Turkey’s defense cooperation with Ukraine, Libya and Eastern European countries. In contrast, Syria is a key area where Russia challenges Turkey. Still, it is not possible to account for Turkey’s competition with Russia in the Middle East, North Africa, Eastern Europe, the Black Sea and even Central Asia with reference to pursuing a balance between the U.S. and Russia. Instead, Ankara increases its military footprint in those areas to defend its national interests. It launches commercial initiatives and attempts to transform the defense industry into a key part of its foreign policy.

The third dimension is related to Turkey’s emerging profile as a power with global impact. That Ankara took a series of steps to “expand its strategic portfolio” is not lost on anyone. Thanks to Erdoğan’s leader-to-leader diplomacy, the country takes risks and engages in tensions while simultaneously opting for normalization at will. Turkey’s active presence in many areas of crisis and breakthrough may evoke some initial backlash, yet tensions give way to cooperation before long. Indeed, that is how Turkey’s relations with Egypt, the Gulf and some European nations have evolved. Defense and energy, then, represent areas where Turkey projects power, rather than limiting itself to the role of a transit corridor.

The bilateral meetings between Erdoğan and Putin will go down in the history of diplomacy as striking examples of leader-to-leader diplomacy. It was thanks to those meetings that the Turkish-Russian relationship underwent a multidimensional transformation since the downing of a Russian jet in 2015. As such, the bilateral relationship became multilayered, as Turkey came to play a more active role. At the same time, a unique logic applies to areas of competition, from Syria and Libya to Nagorno-Karabakh. It reflects an interesting synthesis, whereby cooperation and competition go hand-in-hand. Accordingly, crises are managed and new leaps in cooperation take place as a result of frequent meetings between the two leaders.

It is time to look at Turkey-Russia relations from the perspective of an “early response to great power competition” rather than the classical balance-of-power approach.

Erdoğan vs opposition: New constitution, Kurdish question
Next
Loading...
Loading...
We use cookies to ensure that we give you the best experience on our website. If you continue to use this site we will assume that you are happy with it.Ok