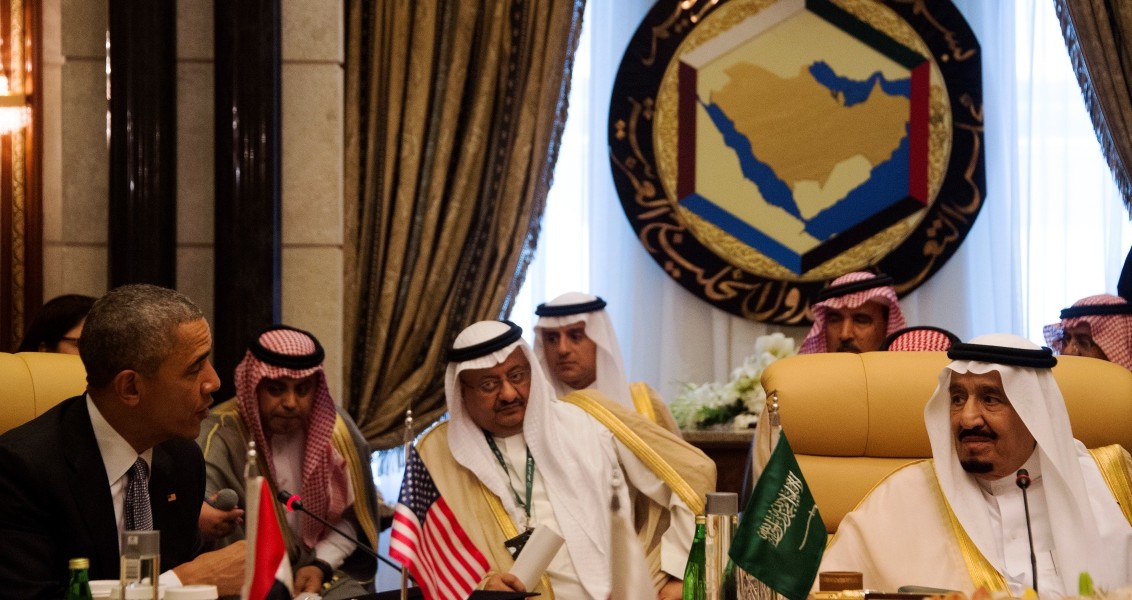 A picture taken on April 21, 2016 shows US President Barack Obama (L) meeting with Saudi King Salman (R) during the US-Gulf Cooperation Council Summit in Riyadh, on April 21, 2016. Despite concerns about Iran's behaviour, neither the US nor Gulf states wish for conflict with the Shiite nation, Obama said. "None of our nations have an interest in conflict with Iran," he said at the close of a meeting in the Saudi capital with the six-nation Gulf Cooperation Council. / AFP PHOTO / Jim Watson

The doctrines of President George W. Bush and Obama made long-term uncertainty innate to the region, which would change the security and alliance structures of the Middle East. But how?

U.S. President Barack Obama likes to speak directly and based on facts. At the Gulf Cooperation Council (GCC) summit, to which Obama attended to clear doubts about U.S. relations with Gulf countries, he gave a considerable amount of advice to Gulf leaders. Enacting economic reforms, developing human rights and increasing self-defense abilities were among the pieces of advice given.

However, he left Riyadh without a new, tangible plan or initiative that could relieve the security concerns of the Gulf, except for new weapons sales connections. More importantly, Obama suggested the leaders “share the region” by pointing out that clashing with Tehran would not serve their interests. This is a highly liberal suggestion in line with his view of administering the conflicts in the region, which he asserted in the aftermath of the Arab Spring uprisings.

The U.S. likes to attribute foreign policy visions of terms to presidents’ names. If I follow this tendency, I can say that the doctrines of President George W. Bush and Obama made long-term uncertainty innate to the region, which would change the security and alliance structures of the Middle East. But how? After Sept. 11, Bush’s two invasions and the fight against al-Qaida formed a geopolitical gap in the region. And the wave of Arab Spring uprisings emerged as a result of the combination of this gap and the demands of people who were not pleased with authoritarian regimes.

The Obama doctrine, on the other hand, is based on the argument that the U.S. is not the watchdog of high-cost operations in the Middle East in its approach to the uprisings. His doctrine also suggested that the free-riding regional countries must take responsibility for their own problems. So the Libyan, Syrian, Iraqi and Yemeni conflicts led to proxy wars between regional powers. In other words, these intra-regional problems turned into fights to share and have influence over the region. The fights also involved not only regional countries, but also some global powers, including Russia. I believe the outcomes of these ongoing conflicts will bring a second wave of instability reminiscent of the Arab Spring sooner or later. To put it differently, the current reflections of the Obama doctrine on the region is paving the way for a new upheaval.

Another effect of the Obama doctrine is that the regional forces of Turkey and Saudi Arabia have been obliged to pursue relatively more independent policies. As for Iran, it has been conducting its own independent foreign policies since the 1979 revolution. Thanks to the nuclear agreement, the country has focused on intra-regional competition by revising its anti-Western policy. Regional forces, so to speak, had to develop new doctrines due to the threats they felt.

The doctrine of President Recep Tayyip Erdoğan is an updated version of Saudi King Salman’s doctrine and Iranian Supreme Leader Ali Khamenei’s doctrine. But something seems to be wrong with the picture. While Iran is integrated into the international system, the Erdoğan and Salman doctrines are being criticized for diverting from the West as they focus on their national priorities.

As these countries, which are supposed to shoulder much more of a burden in order to solve their own problems, produce more independent policies, they are found disruptive and, are warned in a way. The U.S.’s moderate disciplinary power comes into play at this point. The extremeness of Saudi Arabia’s Wahhabi ideology and women’s rights problems are voiced to Saudi Arabia. As for Turkey, press freedoms are being constantly reiterated.

However, it was inevitable Obama’s policy, which led former U.S. allies into a new understanding of alliance, would bring new consequences. In the chaotic atmosphere of the region, Turkey and Saudi Arabia have to adopt more active stances in accordance with their own security priorities. Due to Obama’s approach, which strives to discipline Turkey through the Democratic Union Party (PYD) and Saudi Arabia through Iran, both regional powers afford to go against the U.S. To give an example, Ankara keeps the option of hitting the PYD on the table due to the threats posed by the outlawed PKK and the PYD in Syria.

Saudi Arabia is progressing in a more assertive way. After its interventions in Bahrain and Yemen and support of the coup in Egypt, the country is now engaging in new initiatives. An Islamic alliance against terrorism, cutting off aid to Lebanon, receiving two islands from Egypt and opening a military base in Djibouti are a few. In addition, while the U.S.’s relations with its traditional allies weaken, these allies’ search to form different, subject-based coalitions among themselves gains new momentum. A Turkish-Saudi convergence and the Turkish-Israeli meetings to pave the way to reconciliation are examples of this.

Seemingly, we will continue to see a competition of doctrines and shared concerns in the Middle East for quite a while.

Change Is On Horizon for Turkish Central Banking
Previous

Between the Privilege of Committing Crime and Political Freedoms: Parliamentary Immunities in Turkey
Next
Loading...
Loading...
We use cookies to ensure that we give you the best experience on our website. If you continue to use this site we will assume that you are happy with it.Ok