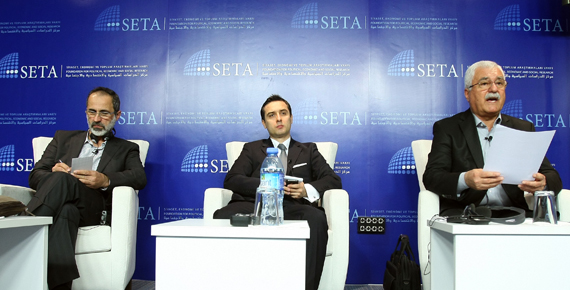 On March 22, a panel on the Syrian Revolution was organized and hosted by the Foundation for Political, Economic and Social Research (SETA) in Ankara. Panelists were two leading figures of the Syrian opposition.

At the panel moderated by the SETA fellow researcher on the Middle East Ufuk Ulutaş, President of the Syrian National Coalition Moaz Al Khatib and President of the Syrian National Council George Sabra evaluated the current situation in Syria, possible solution scenarios and position of the international community. The duo underlined the fact that the opposition has made some gains as the crisis turns its 3rd year.

SABRA: DEMOCRACY DISCOURSES OF THE INTERNATIONAL COMMUNITY SHOULDN’T BE UP IN THE AIR

President of the Syrian National Council, Sabra, said that the crisis in Syria proceeds by stages. The Syrians first demanded freedom and rights. As the regime committed crimes of humanity, however, people wanted to overthrow the regime and the regime itself escalates the tension; the tension that nurtured feelings of people to fight against a repressive and despotic leader, after they saw millions of houses destroyed, tens of thousands of dead and hundreds of thousands of missing people. Armament of the Resistance is not a choice of people, but it, in parallel to current developments, became a necessity, a need, Sabra underlined. International solution attempts have failed so far and there is not a return from the fight against the regime anymore as it tries every single way to protect its post, said Sabra, stressing that if there is anyone who believes in the opposite, they are making a big mistake. “From now on, neither the regime can make people believe the otherwise nor can the opposition topple the regime in a short-time,” Sabra continued. The Council leader came up with the assertion that even the question “Will we let our sons to be killed, just because he wants to remain in the seat?” is being asked among Alawites, who are seen as the ground of the regime. He put the blame on the international community when it comes to why the change cannot be completed rapidly. Sabra said the international community has not provided explicit and strong support to the Free Syrian Army. The crisis in Syria not only threatens Syrian people but also other peoples in the region. The opposition should be equipped with high-graded weapons. And if the international community does not back Syrian people, all their remarks on democracy will remain up in the air and will not be valid, he warned.

AL KHATIB: SYRIA IS NOT THE INTERNATIONAL POWERS’ LABORATORY

The other panelist, President of the Syrian National Coalition said that the Syrian revolution has always been a peaceful one. However, people are armed because the regime pulled them into an environment of war. He underlined the fact that no state in the world had ever attacked its own people by Scout missiles. And those which used chemical weapons against its people lost their legitimacy. The reason why no success has been reached in Syria so far is the attitude of the international community that prepared the ground for excuses of the regime and for crimes the regime committed, according to Al Khatib. The Coalition president said Syria is not a laboratory; the Syrian people will neither forget these massacres nor the responsible parties behind them and the international community will suffer for its attitude of today in the future. Al Khatib continued that some tried to protect the Assad regime however, he and his regime have no future in Syria. As the Syrian opposition, he said, they should also question themselves and that they would baffle the regime’s efforts to create a false image of a religious-sectarian war because revolutionaries would not go for revenge. Al Khatib claimed that Alawites in Syria were manipulated by mafia and used as a screen by the regime. In fact, the regime is not interested in the Alawites’ real problems. Consciousness of democracy and freedom is spreading among the youth; therefore, a way of thought that centralizes democracy, freedom a

University: a Faction or a Campus?
Previous
Myths and Clichés in the PKK Debate
Next
Loading...
Loading...
We use cookies to ensure that we give you the best experience on our website. If you continue to use this site we will assume that you are happy with it.Ok