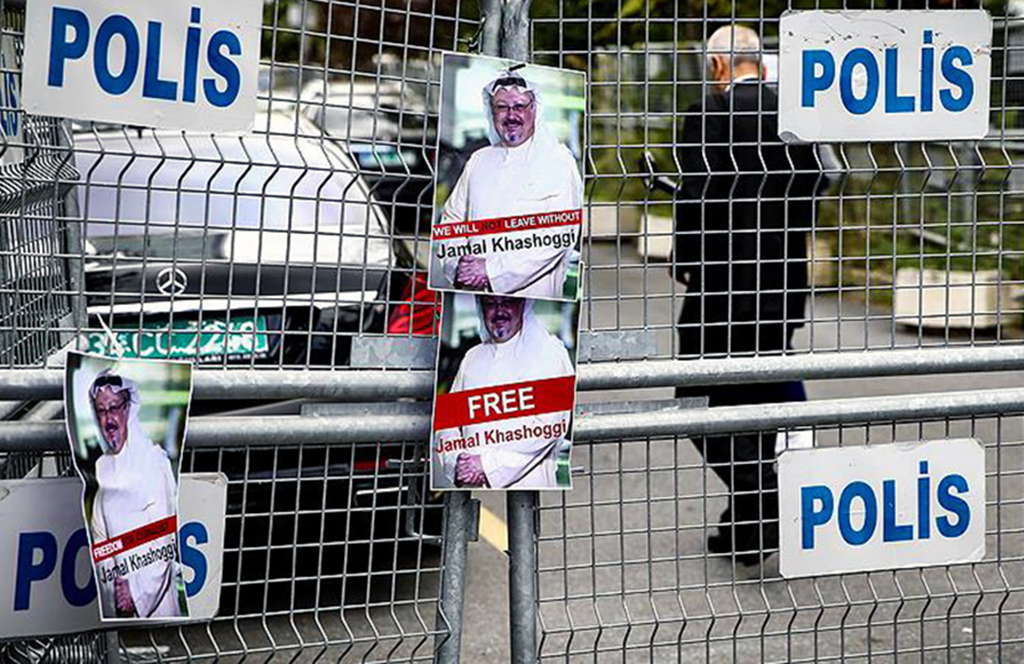 Photos of missing Saudi journalist Jamal Khashoggi hang on a police fence during a demonstration in front of the Saudi Arabian consulate, Istanbul, Oct. 8.

U.S. President Donald Trump continues to take unilateral actions and initiatives toward not only rival and hostile countries but also friendly countries. Trump puts pressure even on America’s closest allies. He tries to compensate for all of the disadvantages that the U.S. has been experiencing.

The most recent example of such behavior is Trump’s words about Saudi Arabia. Speaking at a rally in Mississippi, Trump warned the ruler of Saudi Arabia, King Salman, that without the backing of the American military, the Saudi regime would not last for two weeks. Over the rising price of oil, which is at a four-year high, Trump criticized oil-producing countries and called on the kingdom to increase its defense budget or face an uncertain future. Trump’s explanations show the vulnerability of the Saudi regime; the Saudi authorities just ignored Trump’s harsh words. The Saudi Crown Prince Muhammed Bin Salman explained, “I love working with him. You know, you have to accept that any friend will say good things and bad things.”

There was no immediate reaction in the kingdom to Trump’s comments, since the Saudis want to maintain close military relations with the U.S. First of all, the Saudi regime, which is the largest customer of American weapons, is heavily dependent on America’s military hardware. Therefore, the Saudis continue to cooperate with the Americans on different issues such as maritime security, the struggle against terrorism, arms transfers and cybersecurity. In an answer to the billions of U.S. dollars from the Saudi regime, the U.S. has been preventing numerous terrorist attacks and deterring external threats against the kingdom.

The new Saudi administration, under de facto control of the crown prince, took or intended to take some significant steps with important regional implications. The kingdom began Operation Decisive Storm in Yemen, which caused death of tens of thousands of civilians and millions of them were left to starvation. Following Trump’s visit to Riyadh, the kingdom initiated a blockade against Qatar, which failed due to firm support from Turkey and Iran. The Saudi regime began to take a similar position regarding the future of the Palestinian lands and Jerusalem. The Saudis have been supporting the sanctions imposed by Trump against Iran. However, the kingdom began to suffer due to these initiatives.

Saudi Arabia’s pro-Trump regional policies did not come true. On the contrary, the kingdom’s regional image and national interests were damaged. For instance, after the almost unanimous decision from the rest of the Muslim countries, King Salman had to make pro-Palestinian explanations and rejected accepting Jerusalem as the capital of the Israeli state. The most recent incident, the disappearance or killing of Jamal Khashoggi in Istanbul on Oct. 2, contributed to the negative image of the kingdom.

The disappearance of the well-known journalist Khashoggi initiated a global campaign against the Saudi regime. Influential circles in the U.S. and Europe have been following the developments. For the Trump administration, it will be quite difficult to maintain good relations with the kingdom, since many observers blame Riyadh for the violation of basic human rights principles. Bilateral relations will be questioned in the West, which may end up with tensions.

Bilateral relations may return to its unstable track as it was observed after the Sept. 11 terrorist attacks executed by al-Qaida, which was established by some Saudi citizens, against the main American institutions. The Obama administration tried to hold some Saudi officials accountable and to punish the Saudi regime for the attacks. In the near future, Washington may reclaim the Saudi’s responsibility for the Sept. 11 attacks.

Khashoggi was a contributor to the influential Washington Post newspaper and lived in self-imposed exile in the U.S. to avoid a possible arrest. His disappearance will trigger anti-Saudi perceptions in the Western public opinion, which will influence the decision makers. It seems the cost of the Khashoggi incident is much more than its expected benefits. Khashoggi’s missing will contribute to the negative image of Riyadh. Both domestic and external opposition against the kingdom will increase in the near future. No one can defend the case in the kingdom’s favor. Ultimately, the Khashoggi case will greatly damage the image of the new Saudi Arabia in the making.

Solutions journalism in the age of chaos
Next
Loading...
Loading...
We use cookies to ensure that we give you the best experience on our website. If you continue to use this site we will assume that you are happy with it.Ok