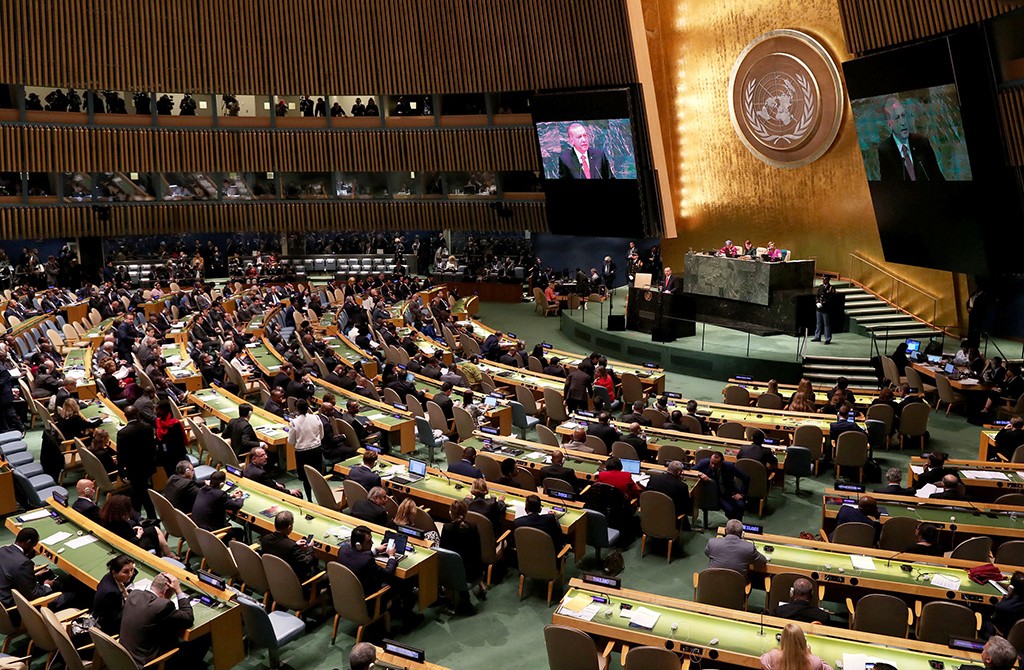 Erdoğan addresses the 73rd Session of the UNGA, New York, Sept. 25. Erdoğan re-emphasized his famous motto against the U.N. system, "the world is bigger than five," criticizing the hegemony of the five permanent UNSC members over the organization.

Almost everyone agrees that there is a need for serious change in the structure of the U.N. However, there is no agreement on the nature and the direction of this change

The world is more connected than ever. People all over the world see, recognize and have even been affected by the economic, political, humanitarian or environmental problems that are happening in parts of the world they’ve never been. Such awareness normally should have triggered more integration, collaboration and joint interventions, but rather than dealing with those crises with a sense of solidarity many nations try to build walls of different kinds to seal themselves from the threats they consider significant to themselves.

They are mistaken to think that those “walls” will somehow protect them from the problems happening elsewhere. Protection can only be temporary and limited. They need to collaborate deeper with a genuine approach to address such problems at their source rather than erecting walls around themselves. The United Nations General Assembly is considered an important venue to raise awareness about the global problems and to find some common ground to address those challenges. The General Assembly is having its 73rd meeting in the U.N. headquarters in New York to discuss all sensitive issues. There is however an overall disappointment with the U.N. system’s inability to address those problems.

The world experienced another ominous genocide at the end of 2017. Rohingya Muslims in Rakhine State were systematically massacred by the Myanmar army and hundreds of thousands were forcefully exiled to neighboring Bangladesh. The U.N. and the important powers in the region have done very little to prevent such a humanitarian catastrophe and a systematic ethnic cleansing. In Yemen, there is an ongoing humanitarian crisis due to the proxy civil war. Yemen’s children are the main victims of this war; they are bombed and starved to death by all fighting sides. The U.N. agencies played a very limited role to mitigate the conflict in Yemen and to alleviate the humanitarian crisis.

The cruel civil war in Syria already left behind a destroyed country and hundreds of thousands of deaths and millions of internally displaced persons (IDPs), while the infrastructure of the country has been damaged. The dictator Bashar Assad, who destroyed his own country, has killed thousands of Syrians in his torture chambers and prisons. Assad used chemical weapons against his own citizens and has paid no price for his brutal policies that are sponsored by his allies.

Another humanitarian crisis in the northern province of Idlib has been prevented with the insistence of President Recep Tayyip Erdoğan and the diplomatic flexibility of Russian President Vladimir Putin. The U.N.’s response to those crises is at best disappointing. Collective punishment, human rights violations, war crimes and mass killings became ordinary in many conflicts. Some 73 years after its establishment, the U.N. fails to protest the fundamental values that it is based up on. Politicians use the General Assembly as a venue for PR, pushing their own agenda rather than touching the major international problems. This meeting will not be too different from the earlier meetings. Today there is even a much-limited consensus among the world leaders; despite sharing problems such as global warming, the global environmental problem, the refugee crisis and the spread of ethnic conflicts and civil wars, world leaders have no incentives to work together to address those issues.

These failures resemble the U.N.’s failures in early 1990s, where the U.N. was unsuccessful in dealing with the humanitarian crises in Somalia, Rwanda and the former Yugoslavia. Today the world public is more aware of the conflicts happening all over the world and they are more disappointed about the failures of the U.N., considered as the institution that has responsibility to deal with international conflicts. The structure of the U.N. Security Council and the disagreements among the council’s permanent members had always been a significant challenge for the prevention of conflicts. Today the U.N.’s problems are much deeper and diverse than the dysfunctional structure of the Security Council.

There is declining consensus on multilateral issues and there is a clear fragmentation among the countries. Above and beyond, U.S. President Donald Trump is an opponent of multilateralism and collective interests. He even aims to use the General Assembly as a venue to promote his “America First” policy. American leadership had always been very critical for the promotion of fundamental values of the U.N. Trump withdrew his country from UNESCO – the U.N. Educational, Scientific and Cultural Organization – and the U.N. Human Rights Council. Trump also cut American support for the UNRWA, the relief agency that provides humanitarian aid to Palestinian refugees. The initiation of global trade wars in a small scale and more frequent use of military threats rather than diplomacy do not provide a promising framework for this year’s meeting.

Almost everyone agrees that there is a need for a serious change in the structure of the U.N. There is however no agreement on the nature and the direction of this change. All actors expect this change to include their own priority items. What is missing in this debate is the fundamental values of humanitarianism, multilateralism and more inclusive frameworks for decision making on shared issues. There should be renewed commitments to the fundamental values and principles of the U.N. to deal with the challenges of our time. The U.N. may lose its significance and turn into a dysfunctional organization if it falls behind those expectations.

Turkey and Germany: Strategic partnership in the making
Next
Loading...
Loading...
We use cookies to ensure that we give you the best experience on our website. If you continue to use this site we will assume that you are happy with it.Ok