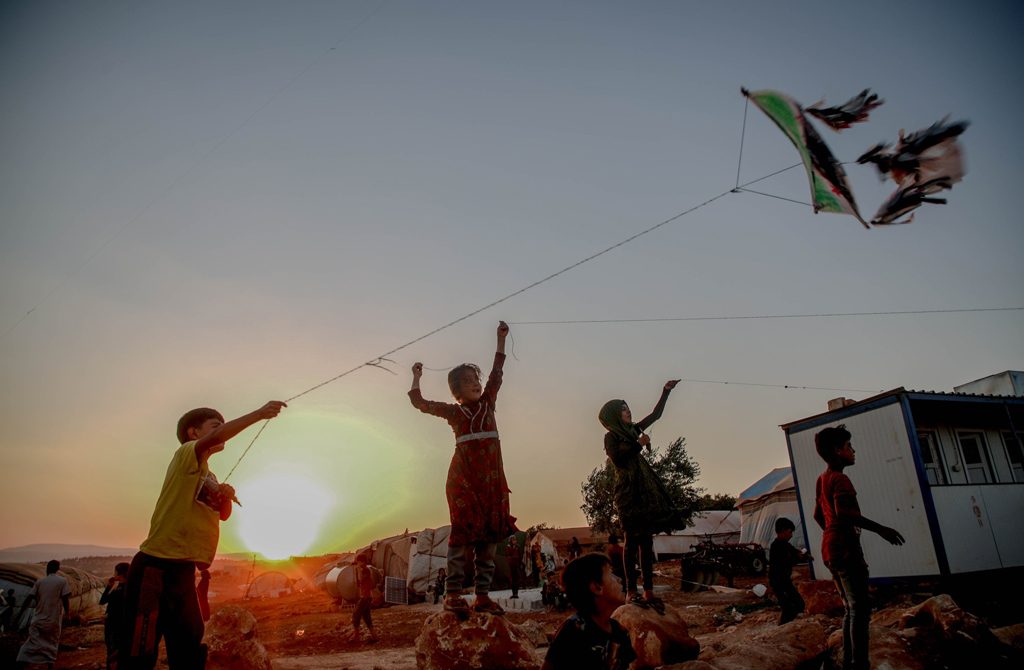 Syrian children fly kites at sunset in a camp for the displaced, Idlib, northwestern Syria, July 6, 2020. (Photo by Getty Images)

Repositioning in the Middle East: A rational view

The Middle East is experiencing an extraordinary amount of activity on the 10th anniversary of the Arab revolts. A series of developments and debates are intertwined: in the Eastern Mediterranean, Turkey and Egypt are watching each other’s movements, as Tel Aviv sends warm messages to Ankara.

The Middle East is experiencing an extraordinary amount of activity on the 10th anniversary of the Arab revolts. A series of developments and debates are intertwined: in the Eastern Mediterranean, Turkey and Egypt are watching each other’s movements, as Tel Aviv sends warm messages to Ankara.

The foreign ministers of Russia, Qatar and the United Arab Emirates (UAE) have just met to exchange views on Syria. At the same time, there is an uptick in attacks by Iranian-backed groups against the United States in Iraq, which the pope also just visited.

Meanwhile, Russia is mounting pressure on Idlib and Jarablus, as Saudi Arabia is coming under attack from Yemen – fueling concern in the Iranian media that Turkey and Riyadh may work together there.

All of these things indicate that global and regional powers are taking stock of their rivalries, conflicts and areas of cooperation.

Needless to say, the Biden administration’s slowly emerging Middle East policy informs such efforts. Washington conveyed its initial messages to the region by turning its back on Saudi Arabia in Yemen, downgrading Saudi Crown Prince Mohammed bin Salman (MBS), and talking about the possibility of a new nuclear deal with Iran.

The Biden administration, whose focus is to compete with China, is not expected to take radical steps in the Middle East. As a matter of fact, the U.S. is unlikely to reach an agreement with the Iranians, since Washington and Tehran are also in a tug of war over Iraq.

The Democrats, too, support the Abraham Accords that Israel concluded with Arab states under former U.S. President Donald Trump’s watch. Finally, Russia is looking for ways to exploit any power vacuum that may emerge in the Middle East during the Biden presidency.

No sign of partial change in Washington’s Middle East policy fully accounts for the heightened level of activity in the region. Regional players feel compelled to revisit their post-Arab Spring policy choices as well as their alliances and rules of engagement, which the Trump presidency put to the test.

Some of those efforts are intended to cement gains. Others are about recovering from failure and adapting to fresh threats and opportunities.

One way or another, regional players must find a way to make their strained bilateral relations work. When it comes to making a fresh start, no country is in a position to dictate its terms on another. Isolating unsolvable problems and focusing on mutual interests appears to be the most popular approach. Nonetheless, the use of proxies will continue in areas of competition.

Saudi Arabia, Iran, Turkey, Egypt, Israel, the UAE and Qatar are among those countries that pursue realignment in the Middle East. Among them, Riyadh and Cairo are most desperate, whereas Ankara and Tel Aviv seem to be at an advantage. Tehran, in turn, is likely to become isolated in the medium run.

Saudi Arabia’s ambitious policy in Yemen has failed, as the country cannot even protect its oil facilities from missiles. The Saudis not only parted ways with the UAE, their ally, but also lost American support. In the end, their ambitious attempt to form an anti-Iran bloc proved futile.

At the same time, Saudi Arabia finds it difficult to normalize its relations with Israel – which is unpopular at home and unlikely to yield results regionally.

MBS won’t be able to shake off criticism over the murder of Jamal Khashoggi. At this point, Saudi Arabia needs Turkey to contain Iran, including in the Yemen theater.

In other words, the Gulf’s policy of dual containment (against Iran and Turkey) is on the brink of collapse.

In Egypt, the government of Abdel-Fattah el-Sissi could not even stop economic collapse with strong financial support from Saudi Arabia and the UAE. Those two countries are now dealing with their own problems.

Cairo’s disagreement with Ethiopia over control of the Nile, too, threatens to result in war. The regime’s pressure has also undermined the Egyptian military’s credibility in the eyes of the people.

In another word, the government in Cairo, the Arab world’s so-called heart, is in a notably weak position. Egypt’s warm relations with France and Greece do not provide it with a strong advantage in attempts to repair bilateral relations with Turkey.

To normalize ties, Cairo must stop presenting its terms to Ankara and instead isolate problems, to focus on areas of mutual interests – such as the allocation of maritime jurisdictions in the Eastern Mediterranean, now that the situation in Libya has de-escalated.

Next time, I will discuss realignment efforts by Turkey, Iran and Israel.

Ankara-Cairo relations in the changing Middle East
Next
Loading...
Loading...
We use cookies to ensure that we give you the best experience on our website. If you continue to use this site we will assume that you are happy with it.Ok