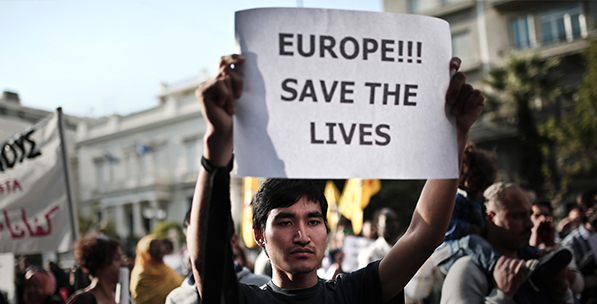 Refugees and the World

The international community is silently watching the refugee crisis around the world despite its urgent major humanitarian catastrophe' warning.

Although the issue of refugees has been a significant dimension of the humanitarian problems in the world, in the last few years it has become a major crisis due to the increasing number of refugees and constant lack of meaningful action to solve the problem. Today, the number of refugees and their desperation is increasing dramatically because of civil wars and the suppression of human rights in different parts of the world. The situation of Syrian refugees, the emergence of a new humanitarian crises in Yemen after the deterioration of the civil war there and poor condition of refugees in Libya and on the Mediterranean Sea have been happening under the watch of the international community. Even though the Middle East and Africa are at the center of this tragedy, in recent years, the refugee crisis also became more visible in different parts of the world, including Southeast Asia. The situation of Rohingya refugees escaping attacks by fundamentalist groups in Myanmar and Uighur refugees who escape the suppression of basic liberties in China and are detained by Southeast Asian countries are worsening day by day. Their number is still not at the same degree with the mass exodus of people from the civil wars of the Middle East. However, now in Southeast Asia, new refugees have already become the victims of a major tragedy and increasingly being easy prey for human smugglers and criminal networks in different parts of the world.

The international community needs to act quickly in order to stop the emergence of a major humanitarian catastrophe because of the increasing misery of refugees. So far, the Turkish government and society have done their best to carry the burden of a large share in this refugee crisis. In addition to millions of Syrian refugees, Turkey has become an important destination for refugees looking for shelter and security. The government’s open-door policy made Turkey a safe haven for those whose lives are in danger due to civil war and government repression. As a result of these policies, as of 2015 Turkey became the country with the largest refugee population. Especially in regard to Syrian refugees this policy is considered as welcoming any person regardless of ethnicity, religion or sect who escapes civil war in their country. However, this situation is becoming increasingly difficult to manage for the countries around Syria. While some in the international community regard that an open-door policy for refugees necessitates the existence of a border with the sending country, in a humanitarian sense, it is not a requirement for countries to follow this policy. Countries that want to contribute to the handling of this tragic situation do not need to have a border or physical proximity with the regions dealing with refugee crises. For example, in the last one week Turkey accepted Uighur refugees from Thailand who were in detention there for months. Any country around the world can pursue an open-door policy to welcome some of the refugees in need. So far, the number of refugees that countries other than those neighboring Syria accepted is very limited compared to those who seek refuge. The situation of Libyans in the Mediterranean Sea and the Rohingyas in Southeast Asia demonstrate the unwillingness of the many countries around the world to adopt this policy.

In addition, with this attempt to collectively deal with humanitarian crises it is also important for the world to approach refugee crises in the world by focusing on the underlying reasons that produce refugees. The increasing number of refugees currently will make the situation unsustainable for the international community and may destabilize countries adjacent to these states. The civil wars in Syria, Libya and Yemen need to be approached urgently by taking this into account. Today, according to U.N. High Commissioner for Refugees (UNHCR) numbers, Syria is the largest source of refugees around the world, overtaking Afghanistan. A solution for the crisis in Syria is key for a long-term handling of this crisis. Similarly, in regard