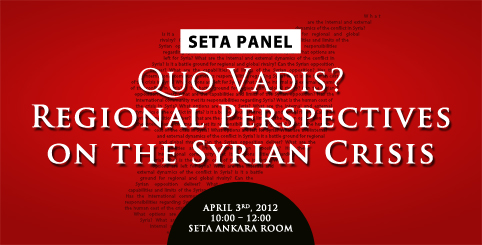 The round table underlined the significance of Russia and Iran in the Syrian crisis, while highlighting the inefficiency of regional and international organizations.

What are the internal and external dynamics of the conflict in Syria? What are the capabilities and limits of the Syrian opposition? Has the international community met its responsibilities regarding Syria? What is the human cost of the crisis in Syria? What options are left for Syria? Participants from Syria, Turkey, Russia, Iran, the United States, Bahrain, Germany, and the United Kingdom discussed the ongoing stalemate in Syria at the SETA Round Table on April 3rd, 2012 in Ankara.

Held in the immediate aftermath of the Friends of Syria Conference in Istanbul, the SETA Round Table brought regional perspectives and facilitated a timely and scholarly discussion on the Syrian crisis. Many of the participants stated that the crisis in Syria ceased to be a domestic issue and became a regional and even an international crisis. Members of the Syrian National Council put forward capabilities and limits of the council, and urged the international community to take bolder steps, not necessarily militaristic, against the Assad regime. Although participants uttered their pessimism about the Annan Plan, they also agreed cautiously that one should still give it a chance. The round table underlined the significance of Russia and Iran in the Syrian crisis, while highlighting the inefficiency of regional and international organizations.

What if al-Assad Does Not Step Down?
Previous
Syrian Litmus Test: Davutoğlu, Kissinger, Larijani, Lavrov
Next
Loading...
Loading...
We use cookies to ensure that we give you the best experience on our website. If you continue to use this site we will assume that you are happy with it.Ok