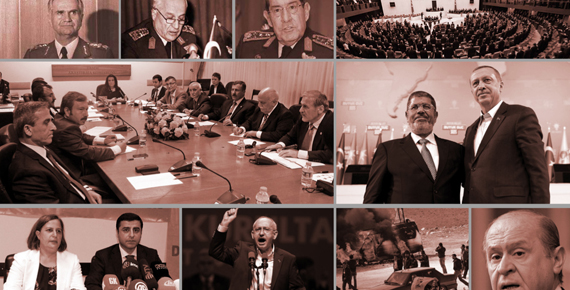 The following analysis summarizes recent developments on two items in Turkeys political agenda: the anti-tutelage struggle; and the PKKs disarmament and the resolution of the Kurdish question.

Turkey experienced the repercussions of the 2010 constitutional referendum that symbolized the loss of political power of the forces behind the tutelary system, and the 2011 elections that signified society’s approval of a construction of a “new Turkey”. These two critical events shifted the ground for all political actors, institutions and groups. However, upcoming local, presidential and parlia-mentary elections in 2014 and 2015 have exerted considerable influence over the performance of political actors on Turkey’s reconstruction process. While political parties could not remain indiffer-ent to the message from the constitutional referendum and the parliamentary elections in support of democratic reforms, they were also reluctant to take any radical steps in 2012 prior to the up-coming election cycle. This tension made possible only minor steps to consolidate the democratic political climate, and any substantial reform process was rendered impossible.

The following analysis offers a look into the performance of Turkish political parties in 2012 under the influence of those tensions, and summarizes recent developments on two items in Turkey’s po-litical agenda: the anti-tutelage struggle and coming to terms with the legacy of military coups; and the PKK’s disarmament and the resolution of the Kurdish question.

Why Should the PKK Disarm?
Next
Loading...
Loading...
We use cookies to ensure that we give you the best experience on our website. If you continue to use this site we will assume that you are happy with it.Ok