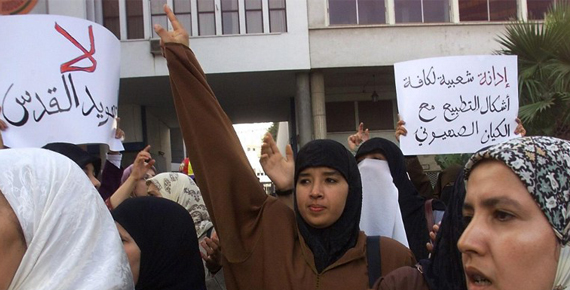 By creating restricted political openings, as was the case in the early 1990s, the king intended to coopt some opposition parties, which had been previously excluded from the political system.

Participation of Islamists in the formal political process had taken two different forms prior to the Arab Spring. One was their de facto acceptance and limited accommodation by authoritarian regimes, as was the case in Egypt by allowing independent MPs from within the Muslim Brotherhood. The other was inclusion in the form of legal political parties, as in Morocco and Jordan, albeit with restricted electoral terms. Since 1996, one group among the Moroccan Islamist groups, namely al-Islah wal-Tajdid (Reform and Renewal), has become an integral part of the parliament, first as an opposition party (MPDC/PJD) and later as a ruling party (PJD) since November 2011. In contrast to singleparty rule elsewhere in the Middle East, a multiparty system has been the choice of the monarchy as the ultimate decision making body in Morocco. While this system was more democratic on its face, successive governments were composed of palace loyalist parties, which came to power through rigged elections up until the 1990s. The monarchy utilized a highly diverse political strategy, including the following measures: 1) repress the opposition movements and deny their legalization, 2) divide the strong opposition parties by favoring certain factions over others, 3) create new propalace parties, and 4) coopt the opposition parties into the system. As the parties became debilitated due to infighting or failing to find solutions to the country’s ongoing problems, the king presented himself as the “ultimate problemsolver” and prevailed as the neutral entity. Thus, multiparty politics upheld the political stature of the king instead of diminishing it.

By creating restricted political openings, as was the case in the early 1990s, the king intended to coopt some opposition parties, which had been previously excluded from the political system. For a group aspiring to participate in the system, the price of inclusion is moderation. In this vein, al-Tajdid wal-Islah has repeatedly reiterated its acceptance of the monarchy’s legitimacy since the mid-1980s, despite having rejected it earlier in the 1970s. Taking advantage of the political opening in the 1990s, the group transformed itself into a political party, and came to power in the 2011 elections. In contrast, the ardent Islamist opposition group al-Adl has persistently rejected the legitimacy of the established order. Its founder, Sheikh Abdessalam Yassine, passed away in December 2012, leaving behind questions about the movement’s relationship with the monarchical apparatus. As the Arab revolutions have transformed politics throughout the MENA region in terms of political participation, it remains to be seen whether al-Adl will continue to defy the monarchy and refuse to participate in the political system.

Al-Adl wal-Ihsan is the largest Islamist opposition movement in Morocco. There are differing estimations regarding its number of followers, ranging between one hundred thousand to five million depending on the source. The political program of the group, aiming to rebuild politics, economics, and society on Islamic foundations, is shaped mainly by the writings of its founder, Sheikh Yassine. Born in 1928, the prolific Islamist thinker went on to found the group al-Adl, known in English as the Justice and Charity Organization, in 1981. Trained in the Boutchichiyya Qadiri Sufi tradition, Sheikh Yassine combined Sufism’s spiritual education (tarbiya) with the Islamist call to apply Islam in all spheres of life. He decried the proliferation o

US-Turkey Relations in the AK Party Decade
Next
Loading...
Loading...
We use cookies to ensure that we give you the best experience on our website. If you continue to use this site we will assume that you are happy with it.Ok