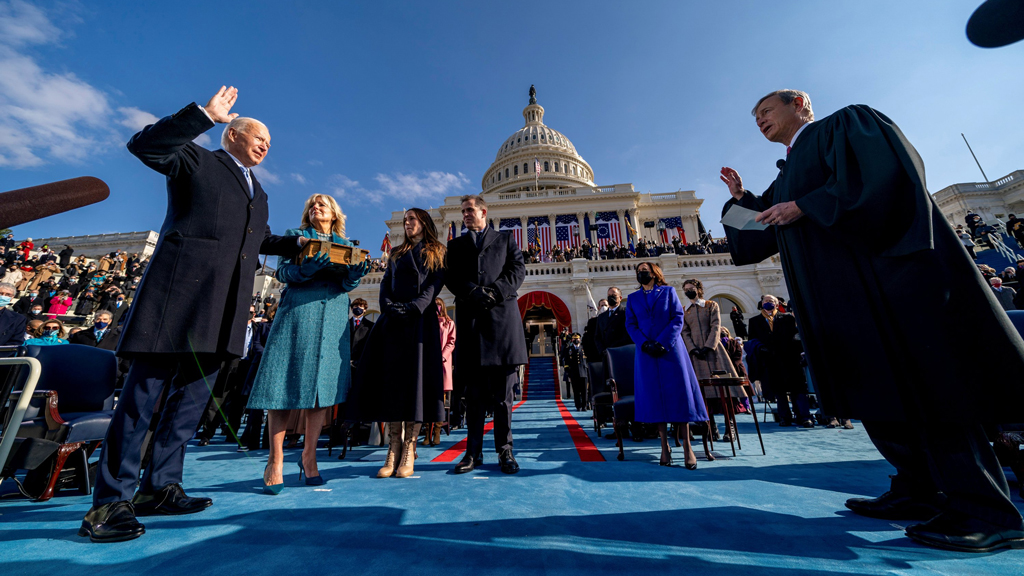 Joe Biden is sworn in as the 46th president of the United States as Jill Biden holds the Bible during the inauguration at the U.S. Capitol, Washington, D.C., the U.S., Jan. 20, 2021. (Reuters Photo)

Polarization, economic crisis, impeachment: What’s next in US?

It is finally over. The election battle in the United States which has been on the agenda for more than a year now came to an end. The long and tiring debates among dozens of Democratic candidates started in late 2019. Everybody knew that it would be a long campaign process due to increasing polarization in American society.

It is finally over. The election battle in the United States which has been on the agenda for more than a year now came to an end. The long and tiring debates among dozens of Democratic candidates started in late 2019. Everybody knew that it would be a long campaign process due to increasing polarization in American society.

However, they did not realize that so much could take place in the midst of the election campaigns. In January, the main agenda in the U.S. was the impeachment trials of Donald Trump.

Twenty-two years after the impeachment trials of former President Bill Clinton, this was the first time that the U.S. was going through this process. In a rather quick process, Trump was exonerated, and everybody thought that it would end the troubles until the election campaign season. However, there were more to come.

The World Health Organization (WHO) did not declare it a global health emergency in January, but in February when the Democratic primaries were set to start, the world had become concerned about the increasing number of infections.

In March just after a few Democratic primaries, the outbreak hit the U.S. In a rather short period of time, the U.S. has become the epicenter of the coronavirus pandemic. It was the worst public health crisis that the U.S. had facing in a hundred years.

The last time the U.S. felt such a crisis was during World War I when the Spanish flu hit the U.S. in 1917.

Shortly after the closing of the economies in the Western world, we witnessed a major crisis in the U.S. economy. The number of Americans who applied for unemployment benefits increased dramatically in a short period of time.

In less than six months, the unemployment rate rose from 3.5% to double digits. More significantly, there was no end in sight.

Economists and scholars started to compare the economic downturn in the U.S. economy to the 1929 Great Depression. Trump’s expectation to normalize life by Easter did not materialize.

In the meantime, the other candidates dropped out of the Democratic race and supported Biden in his presidential bid. It was the beginning of an extraordinary campaign process.

In May, this time following the killing of George Floyd, the U.S. faced the most widespread riots and demonstrations since those that took place following the assassination of Martin Luther King Jr. in 1968.

Police advance on demonstrators who are protesting the killing of George Floyd, Minneapolis, Minnesota, the U.S., May 30, 2020. (Photo by Getty Images)

The COVID-19 crisis had already exhibited the existing disparities and inequalities in American society. The police violence further aggravated the grievances of large segments of the American population. The demonstrations continued for weeks followed by a second major wave of the pandemic.

Elections took place in the midst of all of these crises. The election outcome also demonstrated the major polarizations in American society. The turnout rate and the high number of votes both candidates received demonstrated how America is divided.

These claims in part led to the Jan. 6 attack on the U.S. Capitol building, which has never been seen in U.S. history. After these attacks, a second impeachment process began for Trump, another first in U.S. history.

Even Biden’s inauguration took place in an unprecedented way. After the inauguration, many around the world want to see what we will be next. It is only the election that is over at this point. The long national election is over. We still don’t know what is next for the U.S.

Infographic: Which Issues will be most critical in 2021?
Next
Loading...
Loading...
We use cookies to ensure that we give you the best experience on our website. If you continue to use this site we will assume that you are happy with it.Ok