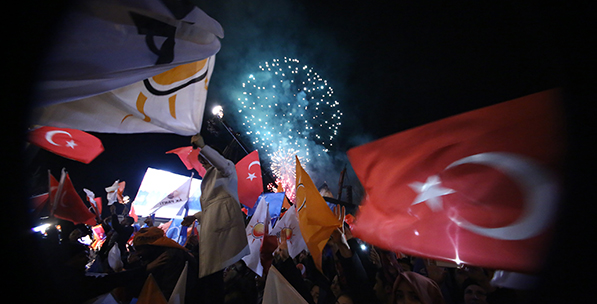 Outcome Of The Elections, Erdoğan And The Gülen Movement

The elections will not end polarization in Turkish politics. In fact, this election should be seen as the first phase of the presidential elections of Aug. 10, 2014.

There was a high rate of participation (89 percent) in the March 30 local elections, which turned out to be one of the most critical elections in Turkey in recent years. Such a high percentage (around 90 percent) participation was also seen in the 1984 and 1994 local elections.
The reason for the high turnout in the first local elections after the 1980 coup was the excitement felt over the return to democracy. The 1994 elections, on the other hand, were held during a period in which the Welfare Party was on the rise and the Kurdish question was distressing the country.

The 2014 local elections, on the other hand, witnessed the struggle for an exceptional opposition coalition aiming to take down a conservative democratic government that has been in power for 12 years. The election material for this contrast-based opposition against Prime Minister Recep Tayyip Erdoğan and the AK Party was provided by the Gülen Movement, a nonpolitical actor. In spite of the election material, such as corruption claims and illegal tape recordings of discussions between top officials, provided by the “parallel structure,” the AK Party declared victory in the local elections last Sunday with approximately 46 percent of the vote.

Where the AK Party has shown a 7 percent rise in votes compared to the 2009 local elections, small parties have lost a considerable amount of votes.

The CHP, the main opposition party which had accused the government of corruption, received only 28 percent of the votes while MHP got 15 percent.

How can we interpret the success of the government and the relative failure of the opposition?

The first outcome of the elections is the following: the political design attempt of informal actors has failed.

There was an expectation due to the tapes scattered all over social media that the votes for the government would drop down to 35 percent.

When a tape recording of a conversation during a security meeting about Syria at the Ministry of Foreign Affairs involving Ahmet Davutoglu was posted on YouTube, it revealed how critically the parallel structure threatens the national security of the country.

The support Erdoğan wanted in order to continue the struggle against the parallel structure which threatens the stability of the state and its politics brought voters together around the AK Party.

Rather than for mayoral candidates, the support for Erdoğan was showcased. This support, vocalized as “I gave my vote to Tayyip,” shows that the opposition’s strategy of smearing Erdoğan (and thus the AK Party) has failed.

The second outcome of the elections is that the polarization politics that focused on opposing Erdoğan and the AK Party as well as religious discourse did not give the opposition the results they hoped for. Even though the CHP increased their votes by putting up candidates from rightwing parties (such as in Ankara and Hatay) they weren’t able to cross the expected threshold of 30 percent. More importantly, we observed that Erdoğan manages polarization and tension politics better than the opposition parties.

Actually, Erdoğan demonstrated his survival skills by coming out with even more strength after the tense periods of the 2007 general elections, 2010 referendum and 2011 general elections. However, because this time around the December 17 operation were targeted at Erdoğan personally, the opposition expected a different result. Erdoğan carved the idea that economic success and political consistency is only possible under his leadership into the minds of the people.

The rage of the White Turks and the desperate opposition of the Gülen Movement drew the majority of people in Anatolia to the AK Party. Another outcome of the elections was the success of nationalist Kurdish politics, in other words, the Peace and Democracy Party (BDP).
In the southeast, the BDP won 11 city municipalities and thus showed that they are the side which benefits the most from the reconciliation process. The BDP’s success will facilitate th

Sisi and The Ghost Of Rabaa
Previous