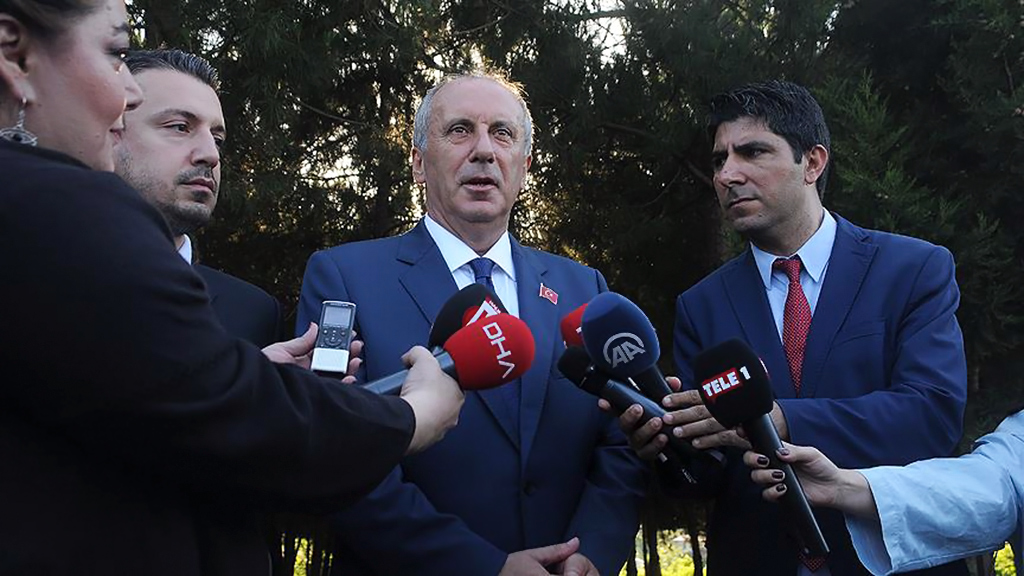 Muharrem İnce, the presidential candidate nominated by the main opposition Republican People's Party (CHP) for the recent June 24 elections, has been trying to take over the party's leadership for quite some time.

Muharrem İnce, the presidential candidate nominated by the main opposition Republican People’s Party (CHP) for the recent June 24 elections, has been trying to take over the party’s leadership for quite some time. In 2014 and 2016, İnce ran for chairmanship but lost against the party’s current leader, Kemal Kılıçdaroğlu. His push for leadership was rejuvenated when he received more votes than Kılıçdaroğlu’s CHP in the June elections. Since then, the CHP and its bases have been discussing whether or not to vote for new leadership.

After the election results, İnce said in a press conference that he would neither call for a congress nor become a candidate against Kılıçdaroğlu “if the delegation doesn’t voice such a demand.” With this careful wording, İnce had clearly directed his attention to the chairmanship once again. Later, he furthered his discourses and openly declared his rivalry against Kılıçdaroğlu and urged the party’s delegation to change leaders.

Half of the 1,242-member delegation – announced as 569 by CHP’s head office – collected signatures for İnce and called for a congress but faced a harsh reaction and resistance from the party’s head office. Tension in the CHP is still running high as İnce and Kılıçdaroğlu follow their own campaigns.

In fact, the ongoing crisis in the CHP is directly related to its experience during the transition to and the period of the multiparty system in the country. İnce has claimed he can get more than 50 percent of the votes to become the CHP’s leader. Is that possible? Obviously, it would be a mistake to make such a precise assumption, but all of CHP’s former election results tell us that such a victory seems impossible. İnce’s discourses about his own relative victory, where he garnered more votes than Kılıçdaroğlu’s party in the June 24 elections, completely detour from CHP’s traditional policies. His rally performances were also different. İnce did not conduct his campaign like a traditional CHP leader. A very quick review of the votes the CHP gathered in previous elections are enough to demonstrate the party’s shortcomings.

We can assume that İnce, as a former senior CHP member, knows his party’s election data and its structural and systematic issues. The main problems of the CHP should be deeply and objectively analyzed to establish the most effective version of a social democratic party for Turkish politics. Analyzing the party relative to current political trends would reveal why the current outlook and political agenda of the CHP will be unable to win any elections in the future, either.

Following the declaration of the First Constitutional Period by Abulhamit II in 1876, Turkey started holding elections. Between 1923 – the beginning of Republican Era – and 1950, there was a single-party democracy. The transition to the multiparty system started with the elections on May 14, 1950. The CHP, which was the only ruling party of the single-party period, was defeated in the first multiparty era. It was a shocking moment for CHP elites. The CHP was unable to gain a majority vote in the following period and has yet to regain the same level of political clout in the country.

Moreover, the CHP lost nearly almost all the next elections. Despite the fact that center-right and conservative parties have changed or divided into different groups, they always seem to top the CHP. The Turkish people’s political aversion to the CHP and other similar parties is still alive and well today. There are many reasons and aspects behind the public’s reaction, all of which should be analyzed and are excellent topics for a future op-ed. However, the fact is, the current political program of the CHP falls short for a majority of voters. If İnce thinks he can win over the country without first working out the issues in his own party, his possible CHP chairmanship will be rocky at best. The CHP’s record proves this. In the end, it boils down to if the CHP can be successful in the current political environment, not whether İnce can win the chairmanship.

Reviving the UN makes the world safer
Next
Loading...
Loading...
We use cookies to ensure that we give you the best experience on our website. If you continue to use this site we will assume that you are happy with it.Ok